How Does Zombie Credit Affect Inflation? Lessons from Europe 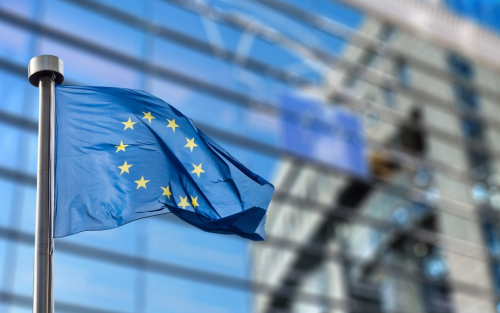 Even after the unprecedented stimulus by central banks in Europe following the global financial crisis, Europe’s economic growth and inflation have remained depressed, consistently undershooting projections. In a striking resemblance to Japan’s “lost decades,” the European economy has been recently characterized by persistently low interest rates and the provision of cheap bank credit to impaired firms, or “zombie credit.” In this post, based on a recent staff report, we propose a “zombie credit channel” that links the rise of zombie credit to dis-inflationary pressures. 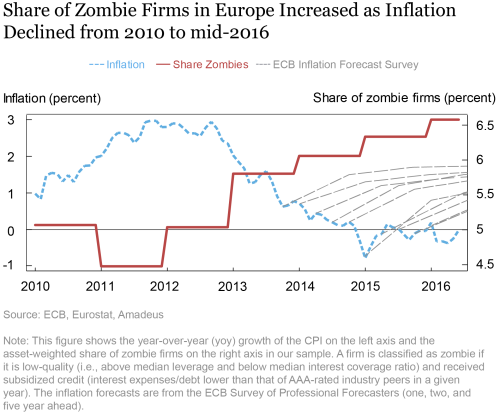 How does zombie credit affect inflation?

Weak banks have an incentive to extend zombie credit to avoid, or at least delay, the realization of losses on their outstanding loans. While the earliest evidence of zombie credit goes back to Japan in the 1990s, more recent studies document an increase in zombie lending globally and, in particular, in the European context. The chart above shows that, in Europe, the share of firms receiving zombie credit has increased from 2012 to 2016. Simultaneously, inflation decreased, consistently undershooting the official projections.

We show that these two phenomena are related: zombie credit has a disinflationary effect. By helping distressed firms stay afloat, zombie credit creates excess production capacity, thereby driving product prices down. In our model, zombie credit hampers the adjustment in aggregate production capacity that usually follows a negative demand shock. The left panel of the chart below shows a market where a downward-sloping demand curve meets the upward-sloping supply curve at equilibrium A. Following a negative shock that shifts the demand curve down, the economy adjusts through the supply curve to a new equilibrium, B. The right panel shows the adjustment following the same demand shock in a market with zombie lending. In this case, the market adjusts through a flatter supply curve to equilibrium C, as zombie credit keeps afloat some firms that would otherwise default. The result is a larger drop in price and a more muted effect on output quantity. 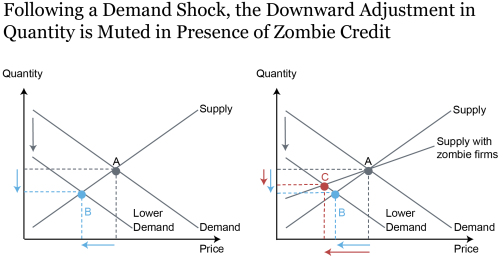 Our model also shows that markets with a large presence of zombie firms become less attractive for healthy firms. In particular, zombie credit causes a decrease in firm entry rates and markups (price divided by marginal cost), as well as a misallocation of capital and labor, which results in lower productivity, investment, and value added.

We test the predictions of our model on a sample of 1.1 million firms from twelve European countries across sixty-five industries from 2008 to 2016. This data set includes product-country level consumer price index (CPI) data from Eurostat and detailed firm-level information from Bureau van Dijk’s Amadeus database. We identify zombies as firms that meet two criteria. First, they are of low quality—that is, their interest coverage ratio (defined as earnings before interest and taxes [EBIT] divided by the interest expense) is below the median and their leverage ratio is above the median (where the medians are calculated per year for each industry-country pair). Second, the borrowing costs of zombie firms are lower than the borrowing costs paid by their most creditworthy industry peers.

We find that, after firms become zombies, their profitability does not improve, their leverage increases, and they are more likely to default in the long term—suggesting that their access to cheap credit is not due to lenders’ expectation that these firms have a positive financial outlook.

Zombie lending has a negative effect on inflation. In particular, we find that markets (defined as industry-country pairs) with a stronger increase in the share of zombie firms subsequently have lower CPI growth. Our results are not driven by (i) a drop in demand in industries and in countries that have a larger increase in the share of zombie firms or (ii) market specific factors that affect firm quality. As shown in the chart below, our estimates suggest that without a rise in zombie credit—that is, if the share of zombie firms had remained at its 2012 level—the annual CPI growth in Europe during 2012-16 would have been 0.4 percentage points higher. This difference explains 48 percent of the overshooting of the ECB inflation survey forecast shown in the first chart of this post. 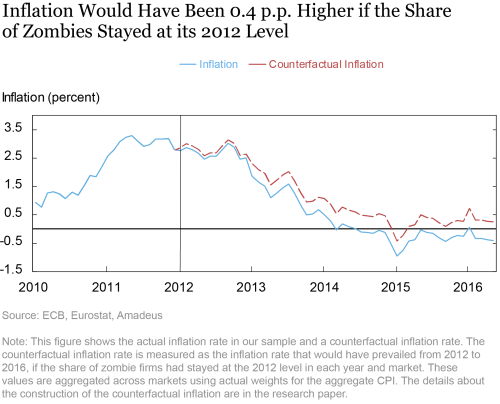 Markets with a stronger increase in the share of zombie firms subsequently have (i) more active firms, (ii) lower firm entry rates, (iii) lower average markups, (iv) higher average material and labor costs, (v) higher aggregate sales growth, and (vi) lower value added. The positive correlation between zombie credit and firm input costs is consistent with a situation in which more firms bid for the same quantity of inputs. While zombie credit attenuates the drop in sales that usually follows a negative demand shock, the concurrent decrease in prices reduces the contribution of these markets to GDP.

Our results are at least partly caused by negative spillover effects from zombie to non-zombie firms. In particular, healthy firms that face competition from a growing number of zombie firms have lower markups, profitability, and sales growth, as well as higher input costs.

Markets with a larger increase in the share of zombie firms subsequently experience a higher misallocation of capital and labor—measured as the dispersion of the marginal revenue products of capital and labor, respectively. In these markets, a combination of excess production capacity and lower allocative efficiency results in lower average net investment, labor productivity, and employment growth for non-zombie firms.

Our results have broader implications outside Europe as a few recent studies document an increase in the number of zombie firms around the world, including in the United States and China. In light of the COVID-19 crisis, our results highlight that cheap credit to impaired firms, while likely well-suited to supporting these institutions in the short term, might suppress economic growth and inflation when provided for too long. Our results call for the development of general equilibrium models to inform policy about the delicate balance between providing some amount of zombie credit immediately after economy-wide shocks and maintaining this support for too long.

Viral V. Acharya is a professor in finance at New York University Stern School of Business.

Tim Eisert is an associate professor of finance at Erasmus University.

Christian Eufinger is an associate professor of finance at IESE Business School.