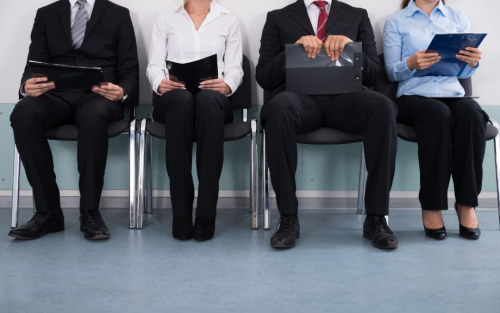 A robust finding in labor economics is that the chances of finding a job decline significantly the longer a person is unemployed (see, for example, Machin and Manning [1999]). This empirical regularity is referred to as “negative duration dependence.” A long-standing question is the extent to which this phenomenon reflects an actual worsening in job-seekers’ job prospects—for instance because one’s skills deteriorate over time—or rather the shifting composition of the pool of unemployed (see, for example, Lancaster [1979], Heckman and Singer [1984]): if the unemployed are heterogeneous in their propensity to find a job, those with a higher underlying job-finding rate exit unemployment sooner, while those with a lower job-finding rate make up a progressively larger and larger share of the unemployed. We refer to the former as “true” duration dependence and to the latter as “dynamic selection” or heterogeneity in job-finding. While separating the two effects is empirically challenging, the two competing explanations have different implications for labor market policy. True duration dependence may require timely job search incentives or re-training programs, while heterogeneity would call for the targeting of re-employment efforts.

A novel way of disentangling these effects is to jointly use data on job-seekers’ subjective perceptions of their chances of finding a job, together with actual job-finding rates at different unemployment durations. As we show in Mueller et al. (2021), the covariance between perceptions and actual job finding helps uncover the extent of ex ante heterogeneity in underlying job-finding probabilities. The remaining duration dependence can then be attributed to a “true” decline in one’s employment prospects.

Here we use data from two novel sources, namely the New York Fed’s Survey of Consumer Expectations (SCE; see Armantier et al. [2017]) and the Survey of Unemployed Workers in New Jersey (NJUI; see Krueger and Mueller [2011]). Both surveys follow the same respondents over time, enabling us to trace how the same individuals update their perceptions as their unemployment spells progress and when they find employment. The SCE is a monthly online survey of a rotating panel of household heads in the United States that started in June 2013, whereas the NJUI is a weekly survey of unemployed workers sampled among recipients of unemployment insurance benefits in New Jersey in the fall of 2009. In the SCE, unemployed job seekers report the probability that they expect to find a job within the next three months. In the NJUI, job seekers report the probability that they expect to be re-employed within the next four weeks. The beliefs are elicited up to twelve times in the SCE, and up to five times in the NJUI, for job seekers who remain unemployed.

The chart below shows the average realized job-finding rate at the three-month horizon for different sets of job seekers, grouped by the length of their elicited three-month job-finding perceptions. The positive relationship reveals the strong predictive nature of the elicited beliefs: on average, those who report a higher perceived chance of finding a job over the next three months are more likely to find a job within that time frame. A related finding (not shown here) is that job-finding perceptions are also highly predictive of actual job-finding rates over the subsequent three months—that is, between months four and six from the time the belief was elicited. This indicates the persistence of potential differences in job finding. 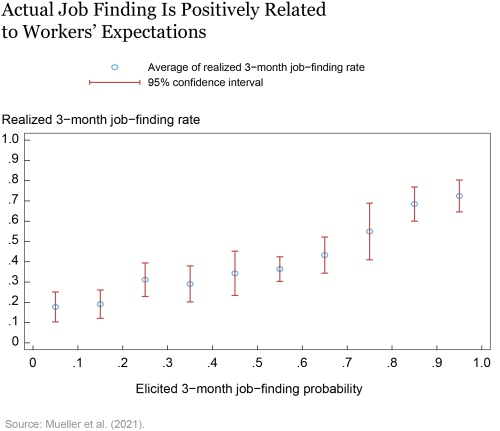 While highly predictive, the subjective perceptions in our data also display an optimistic bias overall, confirming prior evidence in Spinnewijn (2015). The next chart shows averages of the elicited three-month job-finding perception and realized three-month job-finding rate for different ranges of unemployment duration. The chart confirms the strong negative duration dependence in actual job-finding rates. Perceived job-finding probabilities also decline but at a slower pace. Indeed, while perceptions are roughly in line with realizations at the start of a spell, a gap emerges as the spell continues, with elicited beliefs on average higher than actual job-finding rates—indicating a widening optimistic bias at longer durations. Moreover, we find that job seekers do not revise their beliefs downward as they remain unemployed, so the observed decline in perceived job finding is fully driven by dynamic selection. 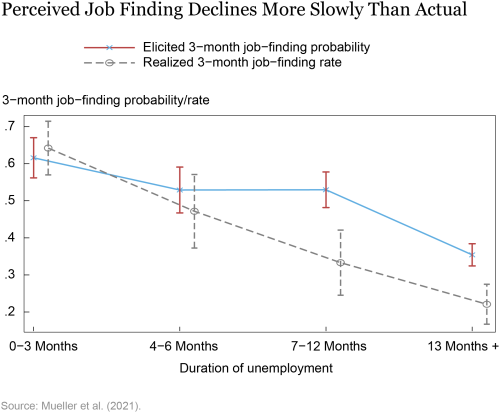 As mentioned above, to disentangle the roles of dynamic selection and “true” duration dependence in explaining the observed decline in actual job finding, we exploit the availability of data on both the individual perceptions and realizations of job-finding, together with the ability to follow the same individuals over time. As detailed in Mueller et al. (2021), we do so both in a “model-free” way, looking for a lower bound of the contribution of heterogeneity, and in a statistical model that allows for biases in perceptions and for transitory as well as persistent differences in job finding across job seekers. We find that about 85 percent of the decline in job-finding rates by duration is due to heterogeneity in job-finding “types,” suggesting a limited scope for actual deterioration in one’s employment prospects over the course of an unemployment spell. The chart below illustrates this graphically: at an unemployment duration of zero months, the distribution of underlying job-finding probabilities is very dispersed, reflecting the large heterogeneity in types. At higher durations (six or twelve months), the distribution becomes more and more compressed toward lower job-finding propensities, reflecting the effects of dynamic selection in the unemployment pool. 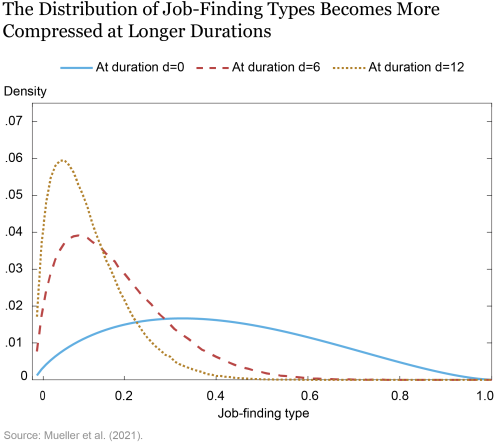 Our analysis underlines the importance of the heterogeneity in unemployed job seekers’ employment prospects. But job seekers underestimate these differences. Those with low underlying employment prospects tend to be overly optimistic and vice versa. The corresponding dynamic selection drives the optimistic bias among the long-term unemployed. Importantly, the under-response of beliefs can itself induce a higher incidence of long-term unemployment. Job seekers with worse employment prospects discard too many potential job offers, as they hold out for the possibility of a better offer in the future. Workers with better prospects do the opposite. The differences in re-employment thus get magnified through job-search behavior. Incorporating such biases in beliefs into a model of job-search behavior, we find that they may raise the incidence of long-term unemployment by 10 percent—a significant amount.

Andreas I. Mueller is an associate professor of economics at the University of Texas at Austin.

Johannes Spinnewijn is an associate professor of economics at the London School of Economics.