VIX futures allow investors to hedge against implied volatility shocks over different horizons. The payoff to a VIX futures contract is the difference between the futures price and the Chicago Board Options Exchange Volatility Index (VIX index) at maturity. From its definition, the VIX index upon which VIX futures are based is equal to the square root of a one-month synthetic variance swap rate. The swap rate is “synthetic” because it is computed from a portfolio of S&P 500 index options following the no-arbitrage formula for pricing variance swaps.

Variance swaps and VIX futures provide insight into equity market expectations for future risks and returns. Historically, selling volatility by receiving the fixed rate in one-month variance swaps on the S&P 500 index has earned a large and significant average return. In addition, the realized variance risk premium and related measures like the SVIX have been found to predict stock market returns. In contrast, the average returns from selling implied volatility have not been as significant as those for selling realized volatility, counter to the predictions from some of the leading consumption-based asset pricing models.

This post contributes to our understanding of the risk-return tradeoff in financial markets by providing time-varying estimates of realized variance and implied volatility term premia (“equity volatility term premia”) from a new term-structure model that is developed in a recent New York Fed Staff Report. The term premia estimates represent the cost of volatility insurance or the expected return from receiving the fixed rate in variance swaps and from selling VIX futures of different maturities.

The chart below plots estimates of RVTP for receiving the fixed rate in one-month and six-month variance swaps from January 1996 to June 2020. As the plot indicates, RVTP are positive and countercyclical. During periods of financial distress, such as the financial crisis and COVID-19 pandemic, RVTP tend to increase and can reach levels as high as 5-15 percent versus the unconditional average closer to 2 percent. In addition, the plot highlights that there is a term-structure component to expected variance swap returns. After a negative shock, short-dated term premia spike and revert to the mean more quickly than long-dated term premia that increase and remain elevated. Finally, the plot reveals that the term structure of RVTP has changed since the financial crisis, with long‑dated term premia increasing relative to short-dated term premia, on average. 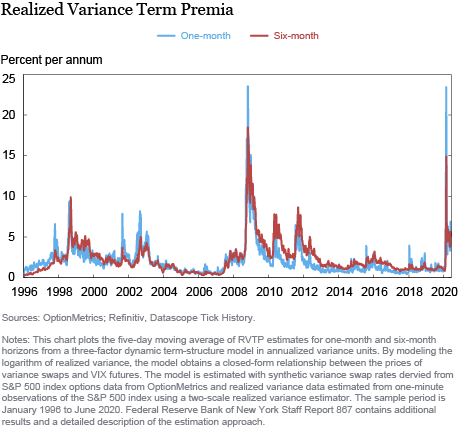 Implied volatility term premia (IVTP) measure the expected return from selling VIX futures. The chart below reports IVTP estimates for one‑month and six-month horizons. The IVTP estimates are large in magnitude and switch between being positive and negative. For example, following the financial crisis, IVTP reach levels as high as 1-3 percent per month, but were negative before the financial crisis and in recent years. The negative estimates of IVTP and downward spikes when systematic risk increases are surprising. Equilibrium models predict that investors should earn a positive risk premium for bearing exposure to realized and implied volatility shocks that is increasing, not decreasing, in systematic risk. 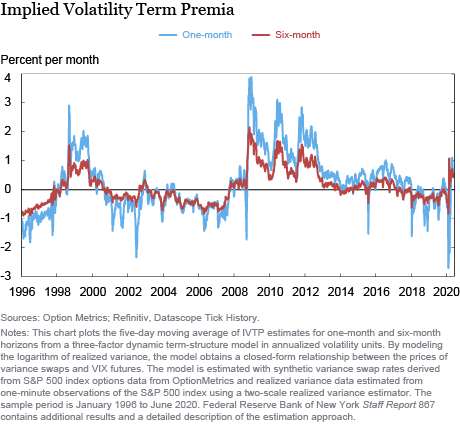 The charts below provide further analysis on the relationship between equity volatility term premia and systematic risk. The plots report impulse response functions (IRFs) for one‑month RVTP and IVTP in reaction to a one‑standard-deviation increase in the VIX index from a bivariate vector autoregression (VAR). The increase in the VIX proxies for a shock to systematic risk. The IRFs indicate how the term premia estimates evolve in the VAR in response to a VIX shock over different horizons in the absence of other shocks. The red line represents the average response, with the gray shaded region reflecting a 95 percent confidence interval.

For RVTP, an increase in risk corresponds to an increase in expected returns that declines over time. This reaction is similar to the qualitative response of risk premia to negative shocks in consumption-based asset pricing models. For IVTP, there is a negative or insignificant response over short horizons, which poses a puzzle. Over longer horizons, the IVTP response is positive and then declines. 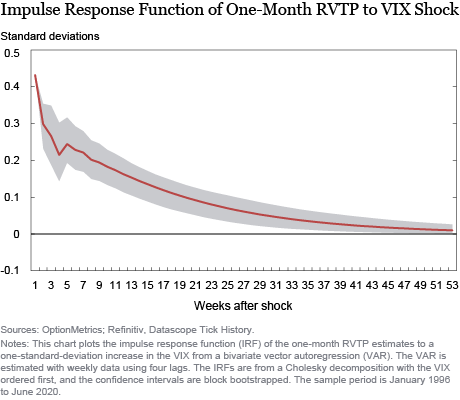 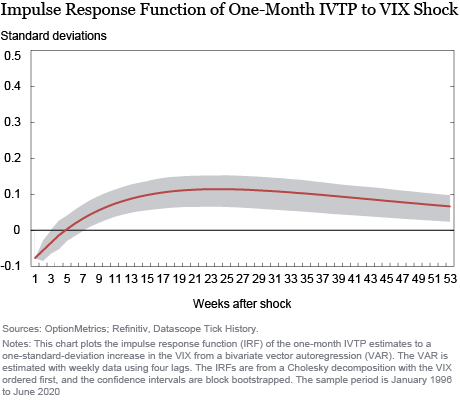 IVTP and the VIX Premium

While surprising from an equilibrium perspective, the finding that IVTP are decreasing in risk over short horizons is similar to the behavior of the VIX premium. The VIX premium is defined as the VIX futures price minus a statistical forecast of the VIX index at maturity scaled to a one‑month horizon. The chart below plots the one-month IVTP against the VIX premium. Despite the different modeling approaches, the time series of the IVTP and VIX premium are significantly positively correlated since the start of VIX futures trading on March 26, 2004. The IVTP estimates extend further back in time because they are derived from synthetic variance swap and realized variance data, not VIX futures data.

The significant relationship between the IVTP and VIX premium is valuable because it questions the mechanism driving the implied volatility risk premium. One hypothesis for explaining the negative response to risk is that demand for volatility hedging falls when risk increases. This explanation is supported by the observation that dealer net positions (long-short) in VIX futures tend to fall when risk increases as measured by the Commodity Futures Trading Commission’s Commitments of Traders Report. While demand pressure may impact the VIX premium through VIX futures prices, the IVTP estimate is obtained without using VIX futures data. The positive correlation thus suggests that a component of the implied volatility risk premium may be driven by the pricing of risk as captured by the term-structure model. 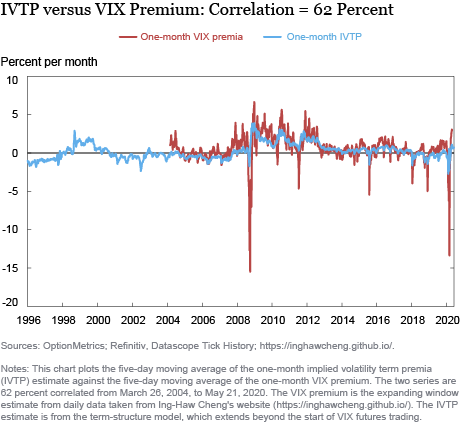 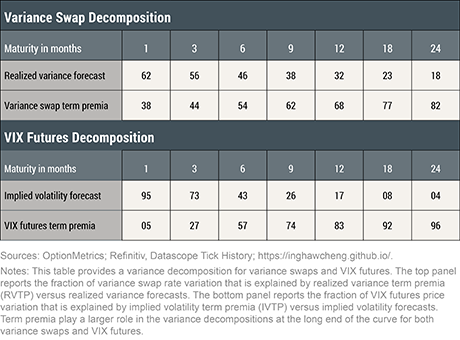 The finding that term premia play a dominant role at the long end of the term structure has different interpretations. On the one hand, the Staff Report finds that RVTP forecast the returns from selling variance swaps and index options and that IVTP forecast the returns from selling VIX futures. Term premia might then be interpreted as the risk-based compensation for bearing exposure to volatility shocks over different horizons. On the other hand, recent papers analyzing term-structure models in fixed income and across asset classes have found that long‑maturity claims exhibit excess volatility relative to short-maturity claims. Understanding whether term premia, the dark matter of no‑arbitrage models, represent compensation for risk, market frictions, inefficiencies, or some combination of explanations remains a fruitful area for research.

In summary, this post estimates the term structure of volatility risk premia for the stock market. Realized variance term premia are increasing in systematic risk and predict variance swap returns. Implied volatility term premia are decreasing in risk initially, but then increase at a lag, predicting VIX futures returns. Term premia account for a significant fraction of the variation in long-maturity claims.

Peter Van Tassel is an economist in the Federal Reserve Bank of New York’s Research and Statistics Group.

Charles Smith is a senior research analyst in the Bank’s Research and Statistics Group.