« The Future of Remote Work in the Region | Main | What Happened to the U.S. Deficit with China during the U.S.-China Trade Conflict? » 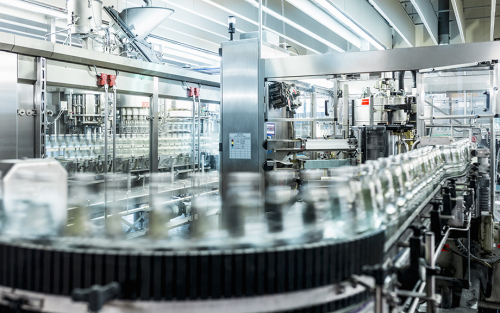 A number of studies have documented that market concentration among U.S. firms has increased over the last decades, as large firms have grown more dominant. In a new study, we examine whether this rising domestic concentration means that large U.S. firms have more market power in the manufacturing sector. Our research argues that increasing foreign competition over the last few decades has in fact reduced U.S. firms’ market power in manufacturing.

A rise in market power is often interpreted to mean that firms can increase their markups over marginal cost without sacrificing profitability. However, markups are unobservable, which helps explain why different studies don’t agree on whether aggregate markups have risen or not. Our interpretation of market power relies on a large class of international trade models, where firms with a higher market share set higher markups. Through the lens of these models, as market concentration rises, aggregate markups increase. Higher markups are undesirable from the perspective of consumers because they redistribute income from consumers to producers.

Our analysis draws on confidential firm-level data from the U.S. Census Bureau from 1992 to 2012 for industries in the manufacturing sector. Importantly, it includes sales data for all firms selling in the U.S. market, both domestic and foreign firms. Foreign firm sales are available from customs forms collected by U.S. Customs and Border Protection and available through the Census. Usually, the sales of foreign firms to the U.S. market are not included in analyses of market concentration as publicly available data only comprise U.S. firms’ sales. However, in order to get an accurate picture of market concentration, it is critical to also include the sales of foreign competitors in the market. For example, a car manufacturer in the United States not only competes with domestic car manufacturers but also with imported cars. We use the market share of the top twenty firms in an industry as our measure of market concentration. 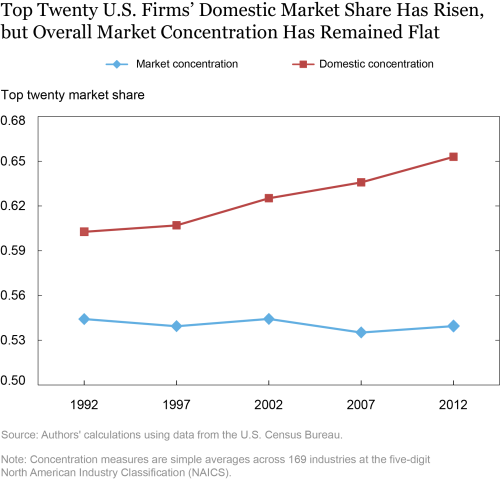 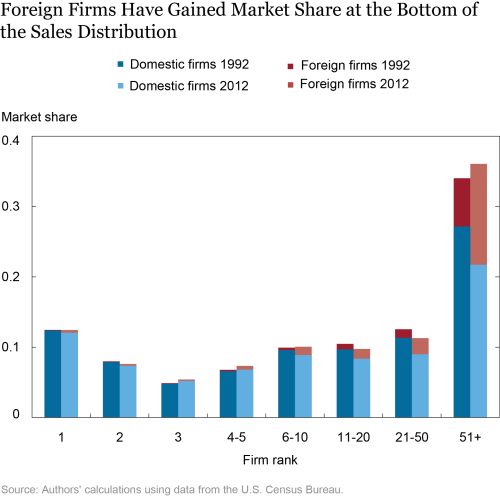 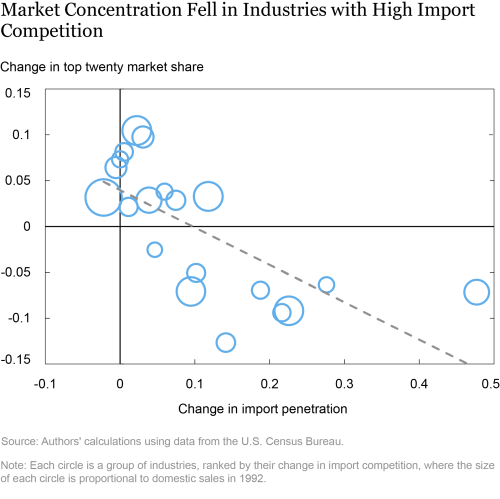 What do these findings imply for the market power of U.S. firms? In light of the predictions of many trade models, our findings suggest that the market power of large U.S. firms has actually fallen in many industries since their share in the overall market has declined. In sum, our analysis suggests that the increasing concentration among U.S. firms themselves is entirely consistent with lower markups of these firms because of tougher import competition.