Title VII of the Dodd-Frank Act requires that some derivatives contracts be traded on centralized exchanges. While the Act is broadly targeting mostly standardized derivative instruments, the most important derivatives contracts under scrutiny are credit default swaps (CDS). Several policy makers and financial commentators argue that CDS trading amplified risks during the recent financial crisis. In this post, I summarize some findings of my recent New York Fed Staff Report (coauthored with Vanessa Savino) that investigates whether a company with CDS trading on its debt faces a higher default risk.

One important issue that has attracted interest is the behavior of hedged creditors. As Hu and Black (2008) formalize the argument, creditors hedged by swaps are “empty creditors” that may be indifferent to a firm’s survival and, thus, less willing to negotiate a restructuring plan. Indeed, some hedged creditors might actually stand to benefit from a distressed firm’s failure and may prefer a bankruptcy to other resolutions. Bankruptcy costs are generally very onerous, so the interference of an empty creditor may lead to an inefficient economic outcome for other creditors, shareholders, and workers.

A lot of the earlier empirical support for the empty creditor hypothesis was anecdotal, based on isolated cases of corporate distress where a firm with existing CDS contracts on its debt was arguably forced into bankruptcy. A recent Economist article highlights several such bankruptcies (Six Flags, AbitibiBowater, General Growth Properties, and General Motors) that have been blamed on bondholders with “unusual economic exposures.” More recent academic studies by Bolton and Oehmke (2010) and Subrahmanyam, Tang, and Wang (2011) provide theoretical and empirical support for the empty creditor problem.

My paper with Savino contributes to the academic literature by presenting evidence for the empty creditor hypothesis from three distinct but related methodologies (see the table below). The first approach derives an explicit measure of bankruptcy using a survival analysis model to assess a firm’s likelihood of filing for reorganization over its entire public life cycle. The key explanatory variable is a binary indicator identifying nonfinancial firms with outstanding CDS. To better understand the influence of CDS over time, we decompose the effect of the CDS indicator across years. The impact of CDS on the probability of bankruptcy is presented in terms of an odds ratio. Formally, the odds ratio represents the probability that a debtor with CDS exposure, which we call a CDS firm, will go bankrupt divided by the probability that a comparable non-CDS firm will go bankrupt. An odds ratio significantly greater than 1 indicates that the presence of CDS is associated with a greater likelihood of bankruptcy. Looking at the pattern of the bankruptcy odds ratios, there is no strong support for the empty creditor arguments in the earlier years of the sample period. However, the evidence is much stronger in 2008 with the odds ratio rising significantly higher than 1.

The second approach avoids the lumpiness of bankruptcy events (clustered in the later years of our study period) by using Merton’s contingent claims model to estimate the relationship between the risk of default (the so-called distance-to-default) and CDS exposure. Consistent with the bankruptcy analysis, the findings reveal again a rise in the relative odds ratio, corresponding to a higher implied default probability for CDS firms in 2007 and 2008.

The final approach uses the Moody’s KMV expected default frequency (EDF) methodology. One important difference between the Merton implied-default probabilities and the EDF measures is that the latter are recalibrated to fit the empirical distribution of corporate defaults. Based on this historical information, KMV adjusts distance-to-default to provide a more normative measure that better reflects the corporate default experience and captures real-time developments in the market. Regression analysis reveals that on average CDS firms exhibit a higher likelihood of default throughout 2004-2008. The EDF odds ratios suggest that CDS firms have experienced between a 13 percent and 36 percent higher likelihood of default.

While some of the evidence is consistent with the empty creditor hypothesis, Savino and I also examine several alternative interpretations for the apparent link between CDS and firm default. For example, the positive correlation between CDS and bankruptcy may be the result of reverse-causality, meaning that creditors may buy protection in anticipation of bankruptcy. To eliminate this bias, we construct an instrument variable of CDS exposure. This corrected measure of excess CDS exposure continues to be positively and significantly correlated with default. Consistent with fire-sale spiral theories, we also find that firms with higher-than-normal exposure to institutional holders experience greater default. The results indicate that institutional investors forced to deleverage rapidly in the financial crisis could have systemically transmitted distress, resulting in significant stock price declines, greater equity volatility, and higher implied default for debtor firms. Still, even after controlling for these additional pressures, we continue to observe that the presence of CDS is associated with a significant jump in bankruptcy risk. 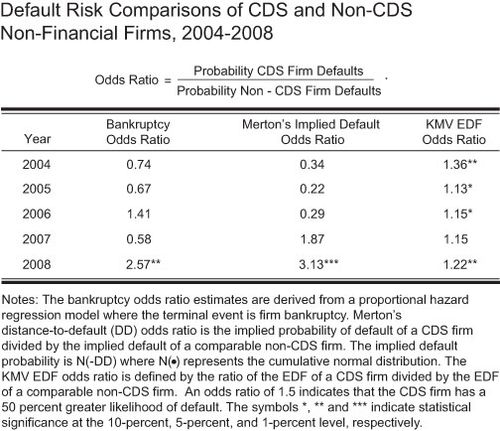 I keep forgetting and I really MUST STOP. Of course correlation IS causality.

Defaults are rare events, and each default event is unique and cannot be lumped together easily for this type of statistical analysis. Association does not mean causation. You can associate defaults with anything (like the number of sunspots) but it does not make a good argument.

The presence of CDS hedging tools will inevitably lead to lower risk profiles at firms with CDS. This is probably a good outcome especially for financial firms. Jack Mullen