Just Released: The Euro-zone Growth Outlook – Calm Before the Storm?

The European Central Bank (ECB) released the results of its 2012:Q2 Survey of Professional Forecasters (SPF) on May 3. As noted in our recent post, the previous survey conducted in January was worrisome because it not only reflected a marked slowdown and increased downside risks to the growth outlook, but also displayed many parallels to the 2008:Q4 survey, when Europe was in a deep recession. The current survey (collected April 17-19) indicates stabilization rather than a further deterioration in the growth outlook. As shown in the chart below, the mean forecasts at both the one-year-ahead (2011:Q4-2012:Q4) and one-year/one-year-forward (2012:Q4-2013:Q4) horizons indicate little change from the previous survey. 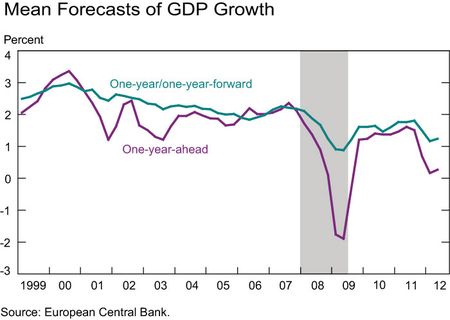 The next chart provides another encouraging sign. The most pessimistic survey participants were less worried about the risks of negative growth outcomes as the probabilities associated with the 90th (P90) and 75th (P75) percentiles declined at both horizons. 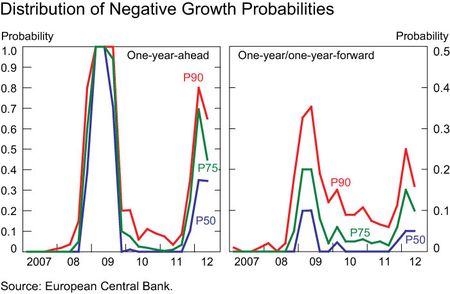 Taken together, an initial reading of the data would suggest concerns in mid-April were more focused on near-term growth and worries about a deeper and more persistent impact of the Euro-zone crisis on growth had lessened. The improvement in the current survey may reflect the impact of policy initiatives undertaken by the ECB and the European authorities subsequent to the 2012:Q1 survey, such as the second Long Term Refinancing Operations and the near-completion of the Greek sovereign debt restructuring. If this assessment is correct, then these policy initiatives were successful in the sense of generating additional time for solutions to the debt crisis to be developed and implemented.

Recent events, however, indicate that this stabilization may only have been a brief calm before the storm. The survey results do not reflect the impact of any unanticipated aspects of the latest electoral outcomes in Europe or new information on the soundness of the Spanish banking system. Moreover, the elevated level of uncertainty of the survey participants is consistent with the view that their outlook for Europe can change quite quickly. The next ECB-SPF will be collected in July and released in August, and will remain an important source of information for monitoring the European growth outlook and its risks.

*Joshua Abel is a Research Associate in the Research and Statistics Group.