The Private Premium in Public Bonds?

In a 2012 New York Fed study, Chenyang Wei and I find that interest rate spreads on publicly traded bonds issued by companies with privately traded equity are about 31 basis points higher on average than spreads on bonds issued by companies with publicly traded equity, even after controlling for risk and other factors. These differences are economically and statistically significant and they persist in the secondary market. We control for many factors associated with bond pricing, including risk, liquidity, and covenants. Although these controls account for some of the absolute pricing difference, the price wedge between public and private companies remains. Despite these pricing differences, private companies with public bonds are no more likely to go bankrupt or to be downgraded than are similar public companies. In this post, we briefly summarize the findings of our study.

Private Companies Pay Higher Interest Rates . . .
We begin by documenting a basic empirical regularity—private companies pay higher interest rates than public companies do when issuing public bonds. This is true even though the disclosure requirements are substantively similar (with the exception of the proxy report, companies with public bonds file similar documents with the Securities and Exchange Commission, including 10-Ks and 10-Qs). 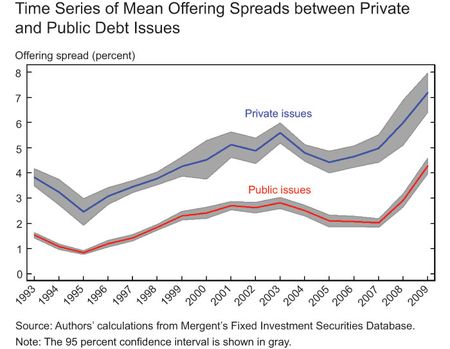 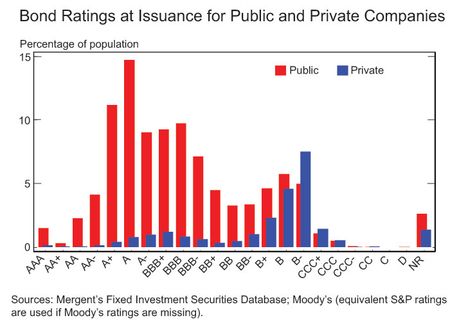 Controlling for Risk Factors, Private Companies Still Pay More
Since companies with public bonds are required to file public financial statements, we’re able to control for observable borrower characteristics and make sure that we appropriately control for differences in risk before concluding that there are real differences in the interest rates of bonds of private companies. Our empirical tests include controls for an array of proxies for credit risk, including rating, industry, leverage, and profitability. We also control for issuance quarter and differences in bond characteristics, such as maturity and putability or callability. While borrower and bond characteristics are associated with pricing, the average difference in bond spreads persists, suggesting that the difference isn’t due to observable characteristics. Although we can’t eliminate the possibility that differences exist in unobservable risk, estimates of the difference in bond spreads are actually higher when we compare the pricing of bonds of the same companies under different ownership structures (45 basis points) and when we use propensity matching techniques (45-56 basis points).

Private Companies Aren’t More Likely to Go Bankrupt
Another way to measure risk is to see if the bonds of companies with private equity are more likely to experience price declines or default. We find no evidence that ex post outcomes for bonds of private companies are worse than those of public companies. Private issuers are no more likely to file for bankruptcy or to be downgraded than are their public peers. Among firms with traded credit default swap (CDS) contracts, we don’t observe any significant difference between the CDS pricing of public and private firms. We also do not find evidence that private bonds perform worse after issuance, although the wedge between the pricing of public and private bonds persists in the secondary market.

Are Cash Flows of Private Companies Less Valuable?
After controlling for risk, what remains to account for the economically sizable pricing difference? Some of the spread differential is explained by differences in the value of equity for private issuers. We calculate a “hypothetical” equity value for all issuers based on earnings multiples of companies in the same industry. All else equal, the first billion dollars of hypothetical equity value lowers spreads of public companies by approximately 46 basis points but lowers spreads of private companies by only 42 basis points, almost 9 percent less. This may be because bond issuers don’t value private equity as much as public equity or because private companies aren’t as valuable.

Costs of Information Matter
We examine how much of the premium in bond prices that remains can be attributed to differences in costs of information. Proxies for opacity of the issuer’s assets, such as first bond offering, earnings variability, underwriter quality, split rating, and existence of CDS contracts, reduce the private premium by approximately 7 basis points (more than 25 percent). Results are inconclusive as to whether the penalty for opacity is different for private companies.

Conclusion
Are the high yields on public bonds of private companies an arbitrage opportunity in the making? Maybe. We find that some of the pricing difference is associated with information, so it may be more costly for bond investors to monitor private companies. The pricing difference would then be outweighed by the need to invest in information gathering. In addition, private bonds are more likely to be called; so if an investor prioritizes duration, this may make these bonds less desirable. Our findings suggest a sizable additional cost of being private, especially for companies that choose to be highly levered. These results have important implications for capital structure. While many theories suggest that the highest quality companies should issue risky debt, we find evidence that private issuers are generally riskier companies.