« Nudging Inflation Expectations: An Experiment | Main | Historical Echoes: How Do You Say “Wall Street” in Latin? »

During the 2007-09 crisis, the Federal Reserve took many measures to mitigate
disruptions in financial markets, including the introduction or expansion of
liquidity facilities. Many studies have found that the Fed’s lending via the facilities helped stabilize financial markets. In addition, because the Fed’s loans were well collateralized and generally priced at a premium to the cost of funds, they had another, less widely noted benefit: they made money for U.S. taxpayers. In
this post, I bring information together from various sources and time periods
to show that the facilities generated $21.7 billion in interest and fee income.


Introduction of Liquidity Facilities
As explained in its February
2009 Monetary Policy Report to the Congress, the Fed responded to the
crisis by introducing or expanding liquidity facilities, providing support to
specific institutions, and engaging in direct purchases of assets. With the
facilities, the Fed initially addressed liquidity pressures facing depository
institutions by changing its discount window program in August 2007 to reduce
the institutions’ uncertainty about the cost and availability of funding. Then,
between December 2007 and November 2008, the Fed launched a range of new
facilities to address liquidity pressures experienced by securities dealers and
other market participants, as well as depository institutions.

The rapid growth of lending via the facilities led to a marked change in
the size and composition of the Fed’s balance sheet, as shown below. Then, as
financial markets stabilized, borrowing from the Fed at a rate higher than the
normal cost of funds became less advantageous and the facilities were wound
down, with most expiring in early 2010. The Fed’s balance sheet remained large
after the wind-down because the reduction in lending through the facilities was
offset by increased holdings from the Fed’s asset purchases. 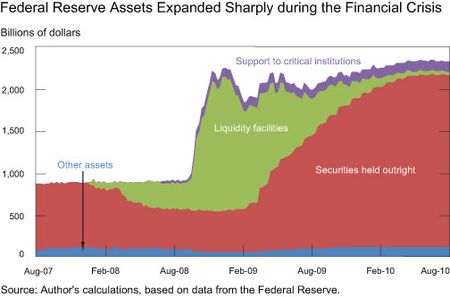 Stabilizing Effects of Liquidity Facilities
There is considerable evidence (reviewed in this recent paper)
that the Fed’s facilities promoted financial stability. To take one example,
the Term Securities Lending Facility (TSLF) was created to promote liquidity in
the secured funding markets relied on by securities dealers. As explained in this study
of the TSLF, the launch of the facility was associated with an immediate
narrowing of financing spreads between less-liquid agency mortgage-backed
security collateral and more-liquid Treasury collateral. This paper
shows that the relationship between the provision of liquid collateral via the TSLF
and the narrowing of financing spreads is statistically significant.

Income Effects of Liquidity Facilities
Not only were the facilities effective at promoting financial stability,
but they also made money for U.S. taxpayers. The table below brings together
information from annual
reports of the Board of Governors of the Federal Reserve, the Fed’s Monthly
Report on Credit and Liquidity Programs and the Balance Sheet, and an article on
the income effects of the Fed’s liquidity facilities. It shows that the gross
interest and fee income generated by the facilities totaled $21.7 billion. Not
surprisingly, most of the income was generated in 2008 and 2009, although the
discount window, central
bank liquidity swaps, and outstanding loans under the TALF
(Term Asset-Backed Securities Loan Facility) continued to generate income into
2012. 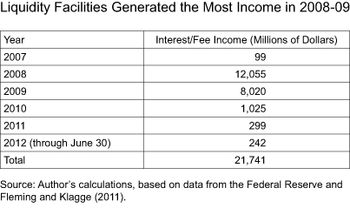 The biggest money makers were the Commercial
Paper Funding Facility, central bank liquidity swaps, and the Term Auction Facility, as shown below. This ranking largely reflects the extent of lending under the various facilities, but also variation in the fees and
income generated per dollar lent. 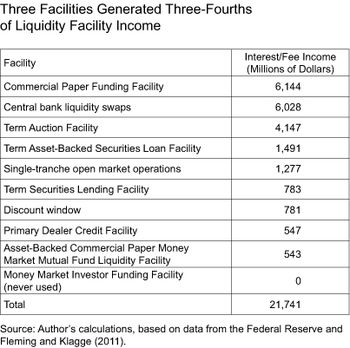 Compensation for Credit Risk?
Lending via the facilities did involve some credit risk, so some of the
income generated should be considered compensation for that risk. However, the
Fed kept credit risk to a minimum by establishing eligibility criteria, by
providing short-term loans, and by requiring adequate collateral. As a result
of these measures, as well as the relatively favorable outcome of its lending,
the Fed did not bear any credit losses through the facilities.

Further Work
To understand the income effects of all of the Fed’s actions during the
crisis, one also needs to look at its support for specific institutions and its
direct purchases of assets. These other measures had different risk
characteristics than the liquidity facilities. Moreover, they were not meant to
wind down as quickly as the facilities and are thus better evaluated over a
longer time period. That said, the liquidity facilities, which made up an
important part of the Fed’s efforts during the crisis, did have a clear
positive effect for taxpayers.

Michael J. Fleming is a vice president in the Capital Markets Function of the New York Fed’s Research and Statistics Group.

I agree with Pierre K above on his initial assertion that the profit is small relative to the massive ‘investment’ the Fed has made in MBS to stabilize the market. But since the former is a secondary consequence of intervention and not the primary motivator, i am pleased that the central bank that is effectively capitalized by the collective confidence of the taxpayer has not yet lost the tax payer money. the amount of ‘profits’ i would assume will only increase after time since it has not been a relatively long while that the fed has held these assets so the profit should reflect this duration. Other public entities recently have not been so lucky, for instance the FHA is on track to draw from the treasury for its bad mortgages, thus costing the tax payer yet again for bad mortgages made. Atleast the fed has not directly cost the taxpayer money and, in the event of an asset sell-off, will yield explicit positive profit back to them. long live cap injections, or as i call them, asset-to-wealth redistribution injections.

The positive effect coming from the added by the Feds liquid facilities including through QE of assets purchasing through and post the 2007-9 Recession times to boost lending and help banks write off bad debt, I believe, is greatly confirmed by this work , which policies have not been implemented by EC that as consequence resulted in the EU deepening economic slam. However, the transmission-ability of the US economy for the liquidity should be improved substantially if long term economic development is sought out, other way the over-capitalization, which prompted the 2007-9 Recession may well find foundations again.

It is no surprise that a such massive intervention by the Fed managed to bring back some stability and that is a good thing. It is a bit questionable, however, to label the $22 billion as “profits,” since this is rather peanuts in regard of the massive amounts lent by the Fed (probably around $1.5 trillion at the peak according to your graph) and the risks that were incurred… Furthermore, the most difficult question is not so much about stability and profits, but about whether the Fed has a mandate to intervene and bail out shadow banking entities and markets that have for years claimed that they rely on market mechanism only… If the Fed was able to help those shadow banking entities and markets, why should the Fed not also directly help homeowners, etc.? Is the lack of “feasibility” really the main obstacle? Which interest groups are “independent” central banks raking as a priority when it comes down to make tough choices? To what extent does the “pro-business” (or one could say “pro-banking-business” as opposed to “pro-market”) leaning of central banks undermine markets and eventually democratic processes and institutions?