« Historical Echoes: Reverse Bank Run, Or When the Money Came Rollin’ In | Main | The Different Paths of Greece and Spain to High Unemployment »

This post updates and extends my
July 2011 blog piece
on household discretionary
services expenditures. I examine the most recent data to see what they reveal about
the depth of decline in expenditures in the last recession and the extent of
the recovery, and find that the expenditures appear to be further below the peak
identified earlier. I then compare the pace of recovery for discretionary and
nondiscretionary services in this expansion with that of previous expansions,
finding that the pace in both cases is well below that of previous cycles. In
summary, household spending continues to be constrained by a combination of
credit conditions and weak income expectations.

Depth of Decline
The chart below updates a similar chart from my previous post showing the
extent of the decline in real per capita discretionary services expenditures
from the previous peak. (A zero value in this chart and the following chart
indicates that expenditures were above their previous peak.) The differences
between this chart and the prior one result from two factors: the release of
data for additional quarters; and the revisions of previously released data.

When we compare this chart with the companion
chart in the prior post, a couple of points are evident. First, the decline in
expenditures was much more severe in the 2007-09 recession than in the 2001 downturn;
moreover, the maximum decline of nearly 9 percent is considerably greater than
the estimated maximum decline using the data from early July 2011. Second, five
years after their peak, expenditures are still about 6.5 percent down (which is roughly similar
to the estimate of the maximum decline reported in my previous post). 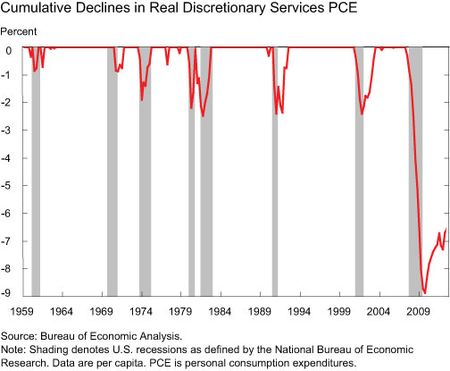 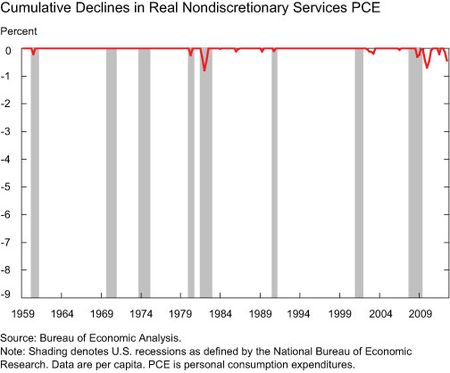 Pace of Recovery
I now examine the pace of recovery for discretionary services spending so
far in this expansion. To do so, I again update a chart from my prior post (showing
an index of real per capita discretionary services expenditures that equals 100
in the quarter at the end of a recession), which allows for a comparison of
this recovery with “fast” recoveries (the average of those following the
1973-75 and 1981-82 recessions) and “slow” recoveries (the average of those
following the 1980, 1990-91, and 2001 recessions). The chart below reveals that
the pace of recovery in the current cycle is still well behind that of previous
cycles. As of 2012:Q3, more than three years after the end of the last recession, discretionary
expenditures were only 1.6 percent above their level at the recession’s trough
(and there has been little change over the past year). In contrast, at this
point in the average slow recovery, these expenditures were 6.1 percent above
the level at the recessions’ trough; in the average fast recovery, they were 12.6 percent above their low point—and were also displaying
steady, solid increases at this stage of the cycle. 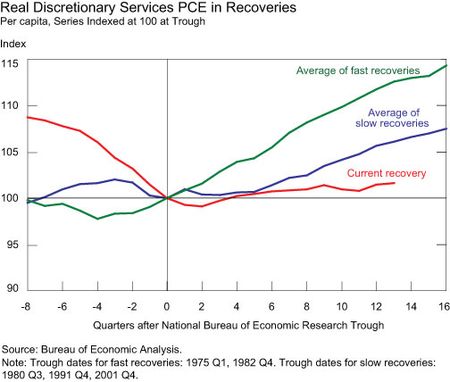 Performing a similar exercise for nondiscretionary
services, I show that these expenditures also have been sluggish in this
expansion relative to previous expansions, even though they didn’t fall that
much during the last recession (see chart below). The level of these
expenditures in 2012:Q3 was 1.5 percent above the level at the last recession’s
trough, compared with 5.4 percent for the average slow recovery and 10.2 percent
for the average fast recovery at the same stage of the cycle. 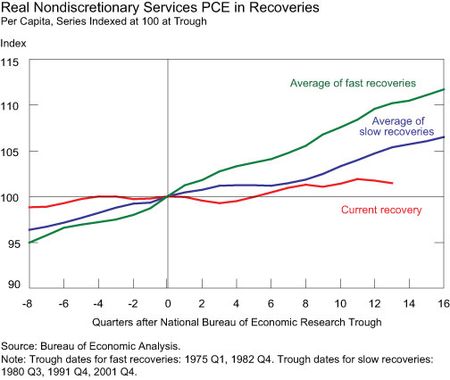 Conclusion
The pattern of a similarly sluggish pace of recovery for discretionary and
nondiscretionary services expenditures suggests that the fundamentals for
consumer spending remain soft. In particular, it appears that households—more than three
years after the end of the recession—remain wary about their future income
growth and employment prospects even though consumer confidence measures have improved in recent months. In addition, households may still see the need
to repair their balance sheets from the damage incurred during the recession,
especially if they expect that increases in asset prices will be subdued at
best and that credit will continue to be constrained. Consequently, a positive
resolution of these issues is likely necessary before a stronger services and
overall consumer spending recovery can be sustained.

Jonathan
McCarthy is a vice president in the Research and Statistics Group of the
Federal Reserve Bank of New York.

Have you ever thought about the impact of slower population growth and aging on the demand for both discretionary and non discretionary services. It can’t all be income, debt, and sentiment as you will find a much stronger rebound for very discretionary durable and nondurable goods.