« Why Isn’t the Thirty-Year Fixed-Rate Mortgage at 2.6 Percent? | Main | Historical Echoes: The Origins of the Piggy Bank »

In finance, auctions are often conducted to buy or sell simultaneously various assets with very different characteristics. These auctions raise a number of challenges that cannot always be addressed with standard auction designs. In this post, I discuss an alternative design—the “reference price auction”—and present evidence that it may dominate other methods often implemented in practice.

Financial institutions often attempt to raise a specific amount of liquidity by auctioning (in a process sometimes called a BWIC, or “Bids Wanted in Competition”) the various assets of a failing institution, or a portfolio of, for instance, distinct mortgage-backed securities with different ratings or vintages. Conversely, procurement (reverse) auctions can be conducted to buy simultaneously various assets with different characteristics. For example, open market operations, the most common channel through which monetary policy is implemented around the world, can involve daily multi-billion-dollar auctions in which a central bank decides to purchase a fixed dollar amount of various securities from a set of eligible sellers. Likewise, in the fall of 2008 the U.S. Treasury contemplated running auctions to purchase a wide spectrum of “toxic assets” from troubled financial institutions.

The conduct of such auctions raises a number of challenges, including dimensionality (there may be a large number of very different assets), information asymmetry (one of the parties—for example, the sellers—may have more information about the value of the assets), concentration of ownership (one bidder may own most of one of the assets), and time constraints (the auction typically needs to be completed within a short period of time). In this context, one may wonder about the relative performance of different auction designs.

To illustrate, consider an institution that organizes a procurement auction to purchase a fixed dollar amount of various securities. It is common for the institution to hold a “grand auction,” whereby the securities with the lowest price bid are accepted first until the buyer’s budget is exhausted. An advantage of this approach is that it may promote competition by letting owners of different securities compete against each other. However, with low bids likely to come for the worst securities, the buyer is likely to end up purchasing the lowest-value securities and overpay, a phenomenon known as adverse selection.

To illustrate this phenomenon, consider a very simple example with two bidders (1 and 2) and two assets (A and B). Bidder 1 owns two units of asset A, while bidder 2 owns two units of asset B. Unlike the buyer, the bidders know that assets A and B are worth $20 and $80, respectively. Finally, say that the buyer has a budget of $100. In that case, a bid by bidder 1 of $50 per unit guarantees that his or her two units are accepted by the buyer (since bidder 2 is not willing to bid below $80). The buyer then ends up buying the lowest-value asset, and overpays (paying $100 for two units worth $40 in total). An alternative is to conduct a separate auction for each type of security. While this approach effectively deals with differences in the value of the various types of securities, it requires in part running many auctions, which is often considered impractical and undesirable.

We argue that the main benefit of this design is that it should create a level playing field by making the bids for securities of different values directly comparable. As a result, it should promote competition across bidders and assets, and it should provide some protection against the previously discussed concern of adverse selection. The performance of the auction, however, may rely heavily on the buyer’s ability to precisely estimate reference prices. In particular, bidders could potentially exploit valuation mistakes at the buyer’s expense. A possible remedy to mitigate such a problem could be for the buyer to reveal the reference prices only after the auction, so that the bidders would not be able to observe the valuation mistakes when they submit their bids. 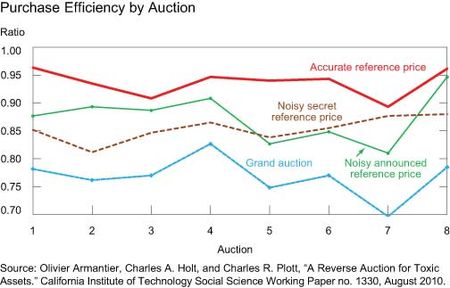 In summary, our results indicate that the reference price auctions clearly dominate the commonly implemented grand auction, even when reference prices are extremely inaccurate; but keeping reference prices secret before the auction does not improve performance. These results provide some support to the views of some auction designers who have argued that, beyond optimality considerations, the performance of an auction is mostly driven in practice by basic economic forces, such as finding simple ways to promote competition.

Olivier Armantier is an assistant vice president in the New York Fed’s Research and
Statistics Group.