The
debate over whether there’s a case for limiting capital flows has intensified
recently—both in media and academic forums. The traditional view has generally
been that the voluntary exchange of funds across borders makes everyone better
off: Borrowers have access to cheaper credit while lenders enjoy higher returns
on their investments. But, as a recent article in The Economist
highlights, this view has been revisited. In this post, we review arguments on
this issue and discuss how our recent research contributes to the debate.

In a recent staff discussion note
and Vox article, International
Monetary Fund economists outline several arguments that could justify the use
of capital controls by policymakers. One is that capital controls can be a
valuable tool to avoid currency overvaluation and protect the export sector at
times when the sector is crucial for economic growth. A similar line of thought
has been put forward by Gianluca Benigno and Luca Fornaro in a recent research paper.
The authors show how reserve accumulation may be justified in these
circumstances—shedding light on the much-discussed Chinese-export-led growth
strategy.

Capital controls may also be a
useful form of macroprudential policy—or a policy designed to ameliorate the
macroeconomic consequences of financial crises. The general argument is that
limiting the flow of funds between countries can lower the probability of
financial crises or, at least, reduce their costs (for formal arguments see,
for example, Bianchi
[2011], Bianchi and Mendoza
[2011], Korinek [2010],
and Benigno et al.
[2011]).
In a world of credit booms and busts, it might be beneficial to restrict
borrowing (or the inflow of foreign capital) in good times to avoid a sudden
loss in access to credit in bad times. The avoidance of bubbles that can result
in uncompetitive economies has also been put forward as a justification for the
use of capital flow restrictions (see Korinek
[2011]).

But capital flow restrictions can be
harmful if they’re driven by unfounded vested interests of individual countries
(or lobby groups within these countries). Fears that capital controls, as well
as monetary policy and direct intervention in the currency market, could lead
to damaging “currency wars” are now at the heart of the global policy debate (as
exemplified by media coverage of recent developments in Japan, Latin America,
and Europe). 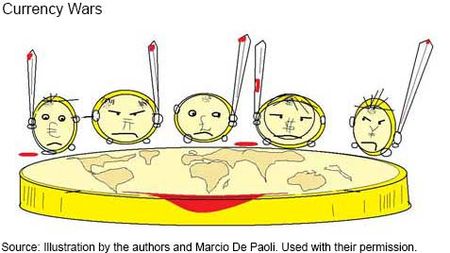 In a recent New York Fed staff report,
we study the pros and cons of interventions in the international flow of
capital. Using a theoretical framework, we highlight that such interventions
can indeed help improve risk sharing across borders when international
financial markets aren’t developed enough to ensure an efficient exchange of
funds across countries. We find that, if the management of international capital
flows is coordinated among countries, it can help these countries better share
the burden of adverse shocks. For example, after a fall in productivity in
Country A, a subsidy to international borrowing from Country B could help
households in Country A share the burden of the shock with households in Country
B.

But our analysis finds that
countries, when acting independently, tend to use capital controls with
different aims. In particular, countries are inclined to impose restrictions on
the flow of capital to strategically influence exchange rates. The theoretical
analysis shows how countries in some circumstances benefit from having an
appreciated exchange rate, as it improves domestic purchasing power vis-á-vis the rest of the world, while in others a
depreciation may be a valuable way to promote domestic goods and enable
domestic households to enjoy higher income and consumption.

Our findings suggest that if interventions
in capital are set by individual countries in an uncoordinated fashion, then they would
go in the opposite direction than those designed to enhance global
risk sharing. Recall that risk sharing can be improved with a subsidy to
international borrowing from countries that face adverse productivity shocks—that
is, international borrowing can help support domestic consumption after a fall
in domestic output. However, policymakers in these countries actually prefer to
tax, rather than subsidize, international borrowing. Taxing capital inflows decreases
the appreciation in the exchange rate and therefore protects demand for
domestic goods. This policy of capital inflow taxation reduces the decline in
domestic output at the expense of a larger divergence in consumption across countries.

Moreover, when countries
simultaneously engage in such interventions in the international flow of
capital, not only global but individual welfare is adversely affected. Our
results thus suggest that uncoordinated policy actions could indeed lead to harmful
capital control wars. The conclusion and policy recommendations that emerge
from our work suggest that there’s a clear case for international coordination
in the use of capital controls.

Anna Lipinska is an economist at the Board of Governors of the Federal Reserve System.

Capital controls are nothing more than stealing; it is telling citizens that their property belongs not to them but to the politicians. Any group of politicians that impose it are nothing more than well dressed highway bandits. No degree of learned sounding research papers can negate the fact that the policy is one of confiscation. It is not only economically unsound because it is inefficient and turns otherwise law-abiding citizens into “criminals”, it is also morally unsound.