« What If? A Counterfactual SOMA Portfolio | Main | More Than Meets the Eye: Some Fiscal Implications of Monetary Policy »

Just Released: Who Is Driving the Auto Lending Recovery?

This morning, the New York Fed released its Quarterly Report on Household Debt and Credit for the second quarter of 2013. It shows a $78 billion decline in overall household debt from the previous period. Delinquency rates improved considerably, with the overall ninety-plus day delinquency rate falling to 5.7 percent, the lowest it has been since mid-2008. The Quarterly Report is based on data from the New York Fed’s Consumer Credit Panel, a nationally representative sample drawn from anonymized Equifax credit data.

This quarter, we provide some additional analysis on auto loans, whose balances have increased as the economy has recovered. Bureau of Economic Analysis data indicate that light motor vehicle sales, which fell sharply during the Great Recession to levels that hadn’t been seen since the early 1980s, made a V-shape recovery. Data released in today’s Quarterly Report show newly originated auto loan balances, used to finance both new and used motor vehicle purchases, also declined during the recession, and have just recovered to 2008 levels, driven in part by historically low interest rates. Data from the FRBNY Consumer Credit Panel enables us to further analyze who is getting these new auto loans. 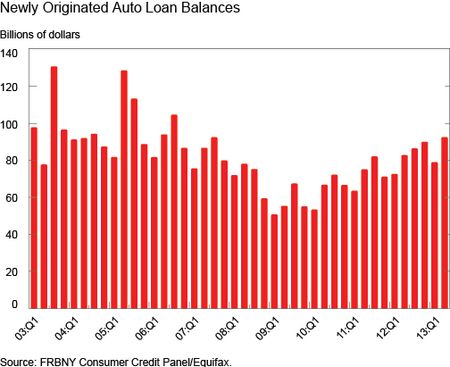 Perhaps remembering the prevalence of subprime mortgage lending before the recent crisis, observers have alternately wondered whether the new growth in auto loan balances is attributable entirely to highly creditworthy borrowers or to those on a weaker footing, infusing new risk into the financial system. When we break out originations by borrowers’ Equifax credit scores at the time of origination, we do not see evidence supporting a disproportionate or unusual volume of new loans being issued to riskier borrowers. While originations to borrowers with the lowest credit scores have increased, they are just recently approaching historically “normal” levels and are below those that we saw during the boom years leading up to the crisis. [The Car Allowance Rebate System, the stimulus program commonly known as Cash for Clunkers, took place in the third quarter of 2009 and is annotated in the chart below with the star; the program had a noticeable but modest effect on aggregate originations and the mix of credit scores.] While individuals with lower credit scores are able to originate auto loans, the origination amounts are still below, but approaching, the levels seen in the early- and mid-2000s. 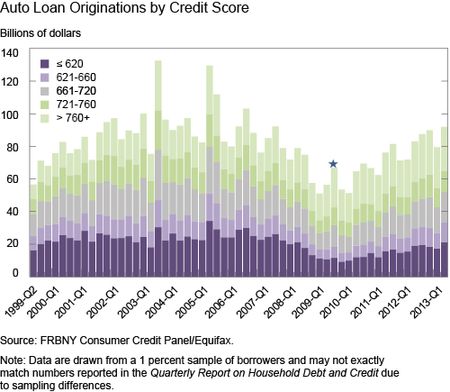 About 23 percent of new auto loans (calculated as a share of aggregate loan balances originated) were issued to borrowers with credit scores under 620 in 2013:Q2, well below the 25-30 percent shares that we have seen historically. On the other end, the share of borrowers with credit scores over 720 peaked at over 50 percent during the recession and is about 45 percent now. 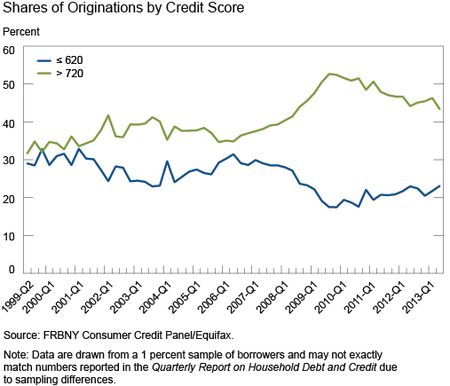 In an April post on this blog, our colleagues Meta Brown and Sydnee Caldwell documented a substantial decline in auto debt at age twenty-five, which was particularly pronounced for young people with student loans. When we include people of all ages, we see that while historically the oldest consumers had originated the least auto debt, the youngest are now borrowing the least. Only older borrowers are now originating auto loans at levels that meet or exceed their pre-crisis amounts; all the other groups are still below their pre-crisis peaks. The especially slow recovery in auto borrowing among the young is consistent with recent analysis suggesting a long-term decline in the demand for autos among younger Americans. 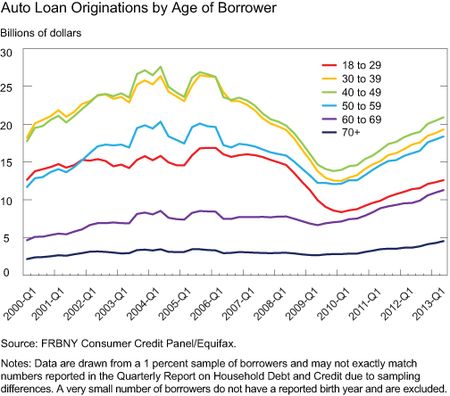 Does the slower recovery in the other age groups reflect that people are taking out smaller loans, or that fewer people are borrowing? While borrowers of all ages took out smaller loans during the recession, average loan amounts have recovered their pre-recession levels for most groups. (The slight exception is thirty- to thirty-nine-year-olds, who took out the largest loans during the boom and remain about $650 below their peak loan amounts.) So declines in aggregate origination volumes are attributable to lower take-up, not smaller loan sizes. 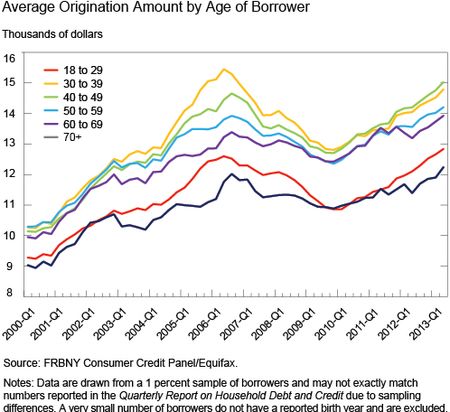 It appears that eighteen- to twenty-nine-year-olds are simply borrowing less frequently. While their average origination amount has caught up to pre-recession levels, they are borrowing far less frequently for car purchases than they had in the past, still averaging under one million new loans per quarter. 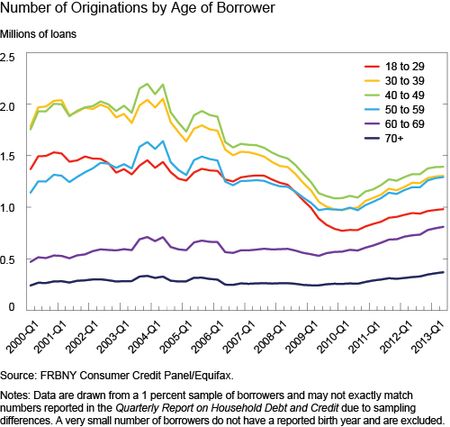 The only group taking out more loans than ever (at least during the time period for which we have data) are people between ages sixty and sixty-nine. However, the apparent increase in loans being originated (in both count and in aggregate balance) by this group is due in part to this population’s sheer growth as Baby Boomers reach their sixties.

Joelle Scally is an economic analyst in the Group.