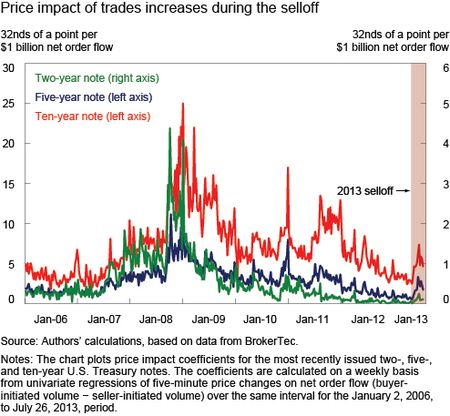 
Dealer Positions Decline during the Selloff
Market commentary suggests that a reduction in dealer balance sheet capacity may have contributed to the decline in market liquidity and amplified price declines during the selloff. Dealers intermediate between buyers and sellers, putting capital at risk in order to absorb changes in client supply and demand. The less capacity a dealer has to absorb supply and demand imbalances, the higher volatility and the lower market liquidity are likely to be.


To gauge dealer willingness to add interest rate risk exposure and buffer the selling pressures coming from their customers, we look at dealers’ net positions (the difference between long and short positions), as reported to the Federal Reserve by the primary dealers. The next chart shows primary dealers’ net positions in U.S. Treasury securities, agency debt, agency mortgage-backed securities (MBS), and corporate securities (where the “corporates” category includes instruments such as private-label MBS and other asset-backed securities). Dealers markedly reduced their net positions in these fixed-income securities during the selloff, particularly for agency debt (red line) and agency MBS (green line), suggesting that they may have decided to limit their outright exposures rather than absorb inventory from customers looking to sell. 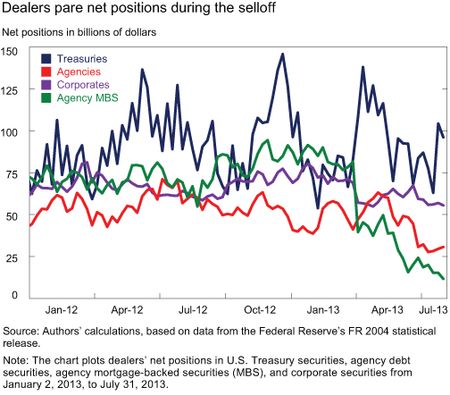 Dealer Risk-Taking Has Declined since the Crisis
We proceed to look at broader risk measures to better understand why dealers pared positions during the selloff. As shown in the next chart, dealer leverage, gauged either by gross or net leverage, declined markedly during the recent financial crisis and has been stable since (gross leverage is calculated as total assets over equity capital, whereas net leverage is calculated as total financial assets − which nets dealers’ reverse repos − over equity capital). This notable decline in leverage suggests that dealer risk-taking has moderated since the crisis. 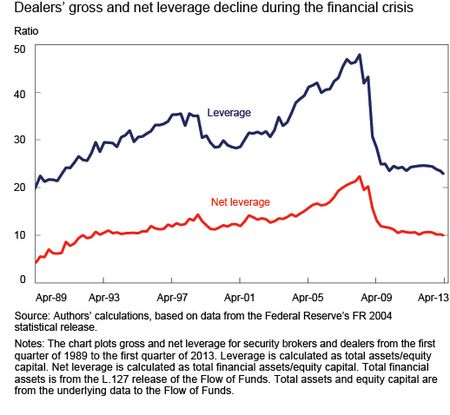 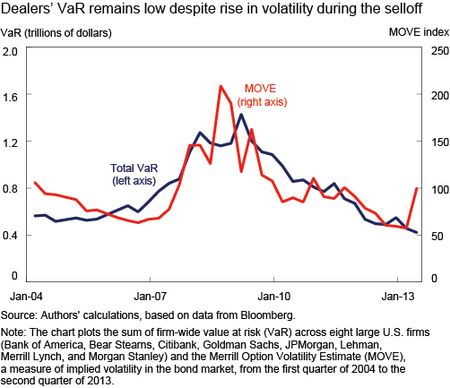 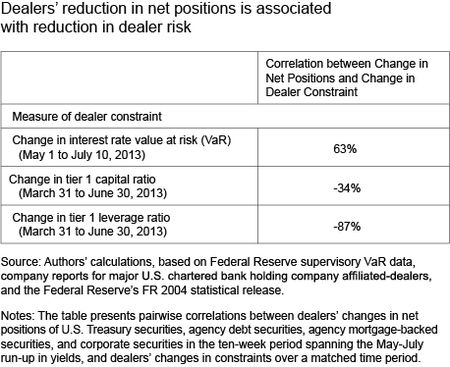 Competing Explanations for the Role of Dealers in the Selloff
The evidence discussed so far indicates that the 2013 selloff was large, that market liquidity deteriorated, that dealers reduced their fixed-income positions, and that the reduction in positions was associated with reduced risk-taking as measured by VaR and regulatory capital ratios. These findings are compatible with two alternative explanations. The first is that dealers were unable to provide market liquidity because of constraints resulting from capital constraints. The second is that dealers decided to manage their balance sheets more conservatively at a time when investors were repricing interest rate risk rapidly. That is, dealers may have been able but unwilling to provide market liquidity.


If the constraints explanation were correct, then dealers facing tighter balance sheet constraints before the selloff would have been expected to reduce their net positions more than other dealers during the selloff. The evidence presented in the next table isn’t consistent with that hypothesis. In particular, U.S. dealers with a higher VaR gap (which measures the difference between a dealer’s VaR and its VaR limit), a higher Basel III tier 1 common ratio buffer (which measures the difference between a dealer’s measured ratio and proposed ratio requirement), and higher tier 1 capital and tier 1 leverage ratios before the selloff tended to reduce their net positions more during the selloff. That is, dealers with greater ability to take on risk prior to the selloff actually sold off more. This relationship suggests that dealer behavior during the selloff appears to have been driven more by differences in risk appetite than by regulatory constraints. 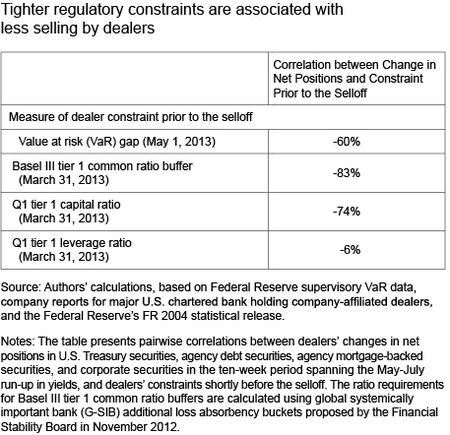 
Fabio M. Natalucci is an associate director in the Board of Governors of the Federal Reserve System’s Monetary Affairs Division.


Jason J. Wu is a section chief in the Division.
Posted by Blog Author at 07:02:00 AM in Dealers, Financial Institutions, Financial Markets, Liquidity

Isn't there a possible question of cause versus effect in your analysis? Assuming that stronger banks are not making markets could very well be because new regulations are possibly more punitive and would have a greater impact on their hard fought capital levels. Much of a large market makers revenues are generatess outside the capital markets function and relies on the maintenance of these capital levels, which have become less profitable given changing capital rules.

Thank you for a great review of this period. One thing I would be interested in is your ideas on these observations relative to the growth in the fixed income market (i.e. AUM, outstandings) since the start of the crisis in early 2007. If the dealer community acts as a "buffer" between sellers and buyers during sell-offs, isn't the potential flow from sales an issue? If The Street's role as a buffer is quantitatively lower, irrespective of cause, and the size of the potential selling higher, is that not a magnifying effect? By some measures, the potential pool of assets is 2-2.5X what is was at YE-2012, making a X% asset sale a much bigger number absolutely as well as relative to the Streets capacity to make fluid markets. Your comments would be appreciated.