« Historical Echoes: A Central Bank by Any Other Name Is Still . . . | Main | Twenty-Eight Money Market Funds That Could Have Broken the Buck: New Data on Losses during the 2008 Crisis »

Economic news moves markets. Most analyses find that economic news is incorporated quickly (within minutes) into asset prices, with some measurable persistence of these effects, and with some spillovers across national borders. Some types of announcements—for example, U.S. nonfarm payrolls announcements—generate much larger asset price responses than others. Generally, news that is more timely, is more precise (being subject to smaller revisions on average), and contains more information (being better able to better forecast GDP growth, inflation, or central bank policy decisions) has a larger effect on asset prices.

The magnitude of the effects of economic news is often discussed as if there is an underlying “rule-of-thumb” relationship, for example, that a payrolls “surprise”—the part of an announcement not already expected—might move a particular asset price by some fixed number of basis points for every 10,000 units of surprise. Yet in a new study, we argue that there is little reason to expect that the relationship between economic news and asset prices should be stable over time.


Why Time Variation?
The time variation could be generated for a number of reasons. For example, it could arise in relation to market views of how the central bank will react to the news. At different points in time, the expected policy outcome of news can change due to a perceived reweighting of inflation and output preferences within policy reaction functions, changing implications of a unit of news for forecasts of output or inflation as the state of the economy shifts closer to or moves further from targets, changing risk preferences in the economy, or the perceived importance of financial stability conditions leading to a (short run) shift of priorities of the central banks. The difference in the effect of a “unit of news” on asset prices can be quite large at different points in time.

To show this more concretely, the study looks at high-frequency asset price data over an eleven-year interval, focusing on data releases that have announcement times of 8:30 a.m. EST. We examine the effects that announcements of the CPI (total and excluding food and energy), the change in nonfarm payrolls, the unemployment rate, GDP, housing starts, PCE core, personal income and spending, retail sales less autos, and the empire manufacturing survey have on asset prices. The surprise components are constructed using expectations data from weekly surveys of market participants (conducted by Money Market Services, a division of Standard & Poor's, for the early part of the sample, and from Action Economics or Bloomberg News more recently).

First, we show that these data releases generally have a statistically significant effect on the yields of U.S. Treasuries of a range of tenors, for example, the two-year, five-year, and ten-year tenors, and that these effects are clear within minutes of the announcements. Second, using sophisticated tests, we show that some of the announcements that move markets the most—for example, those associated with payrolls reports, GDP, and core CPI—exhibit significant time variation in consequences for asset prices. More specifically, the chart below shows the time variation of effects of a unit of payrolls news, which is the surprise component normalized by the standard deviation of surprises, between 2000 and 2011, and intervals around these estimates using measures like standard error bands around these estimated effects. 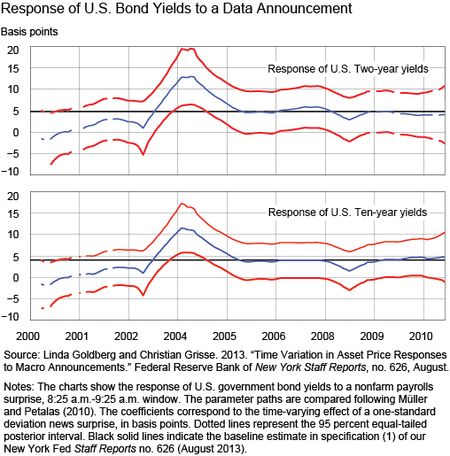 The effect of nonfarm payrolls news on U.S. bond yields ranges between -2 and +13 basis points for a one-standard-deviation surprise. This compares to a highly significant 4-to-6 basis-point estimate in the constant-coefficient regression model, indicated by the horizontal bold line in each of the charts. The estimated coefficient paths peak in 2004, during a period of robust economic growth when the Federal Reserve began a series of 25-basis-point rate hikes (starting in May 2004). The estimated effects of a payrolls surprise on U.S. bond yields decline in fall 2008, in particular during the months before and after the Lehman bankruptcy.


Risk Conditions and Time Variation
We show that risk conditions in financial markets may matter for news effects through a few channels. Market participants might expect the Fed to react less strongly to positive macro news when risk is elevated, potentially because of financial stability concerns. They might place less weight on announcement surprises when the relationship between news announcements and the economic outlook is more uncertain. Indeed, it is possible for U.S. government bond yields to fall following a positive U.S. macro announcement surprise if the risk conditions are sufficiently elevated.

A formal econometric decomposition shows that risk conditions (proxied by the VIX index) are a highly statistically significant determinant of time variation in the responses of U.S. government bond yields. U.S. yields increase on average following a positive payrolls surprise, but the increase is 5-to-10 basis points smaller when risk is elevated. The coefficient on the VIX index is always negative and significant at the 1 percent level, across maturities and across time windows. A second important driver of movements in U.S. bond yield responses to payrolls announcements is the level of the federal funds target rate. When the level of interest rates is already high, bond yields increase less in response to positive payrolls surprises. The coefficient on the unemployment rate is negative across specifications, but not as robustly statistically significant across specifications. These factors explain roughly 50 percent of the time variation in responses of U.S. yields. Inflation is never estimated to be a significant driver of payrolls effects across our specifications, possibly because its consequences are subsumed within the level of the federal funds rate. 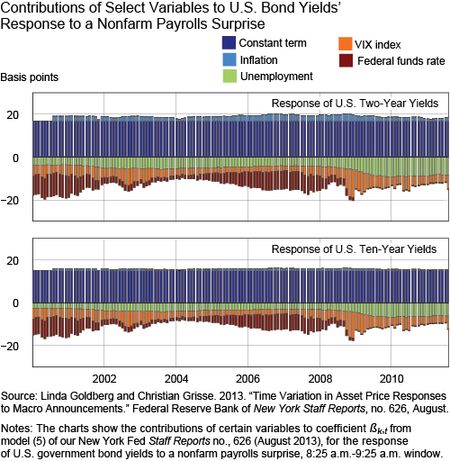 The 2008 episode illustrates how elevated risk conditions and macroeconomic conditions could induce time variation. At the height of the financial crisis, measures of risk were elevated, with several potentially offsetting implications for asset price responses to news. First, the central bank could have been seen as less likely to raise rates (relative to the prior path) following good news due to existing concerns about financial stability and growth, and unable to cut rates following bad news due to the zero lower bound. Second, elevated risk could have signaled that the relationship between macro announcements and subsequent macroeconomic outcomes was more uncertain, leading markets to place less weight on the macro news when updating their expectations. These first two effects would imply that U.S. bond yields rise less in response to good news when risk is elevated, and fall less in response to bad news. Third, positive macro news could lead to a smaller risk premium and therefore to higher yields on "safe-haven" assets such as U.S. government bonds. Finally, positive macro news should imply an improvement of financial stability, raising the likelihood of tighter policy relative to the prior path. These last two effects magnify the standard reaction of U.S. bond yields to data announcements.

Linda S. Goldberg is a vice president in the Federal Reserve Bank of New York’s Research and Statistics Group.
Posted by Blog Author at 07:00:00 AM in Financial Markets, Macroecon