Yen and Yang: The Response of the Nikkei to the Yen -Liberty Street Economics

The Typical Response of the Nikkei to the Yen
As illustrated in the chart below, since the final quarter of 2012—when policy action was increasingly viewed as imminent—the yen depreciated more than 25 percent against the dollar, while the Nikkei rose about 60 percent. 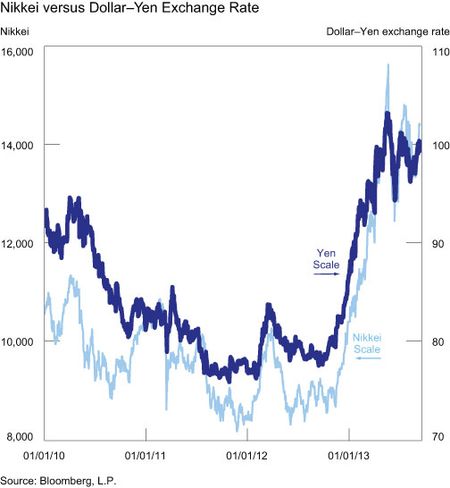 One effect of yen depreciation is to boost the international profits of Japanese exporting firms (denominated in yen) and hence the equity value of those firms. Because Japanese firms in many key industries are relatively export-oriented, this channel of transmission from the yen to the Nikkei may well be quite large.

While our interest lies in determining the impact of changes in the yen on the Nikkei, direct estimation of this relationship would likely result in biased measures of the Nikkei’s reaction because the Nikkei is driven by many factors, some of which also affect the exchange rate. For instance, accommodative monetary policy affects Japanese firms’ international profits (via the yen) as well as their domestic profits (via higher consumption and investment), making the specific role of the yen in driving the overall value of Japanese firms difficult to measure. Consequently, we want to isolate those movements of the Nikkei that can be ascribed solely to the influence of the yen and no other factors.

Our empirical approach is to regress daily changes in the Nikkei on daily changes in the yen spot rate between January 1, 2000, and November 8, 2013. To overcome the problems posed by direct estimation of the relationship, we use a statistical technique called instrumental variables. The idea is to find a variable, called an instrument, which captures variation in the yen’s value but does not respond to movements in the Nikkei (further details on the estimation procedure and our choice of instruments are provided in a technical appendix). Using this technique, we estimate a regression that relates daily percent changes in the Nikkei to daily percent changes in the (instrumented) yen–dollar spot rate. Recognizing that expected future changes in the yen will also affect the equity prices in a similar manner, we also consider two alternative specifications using the one- and two-year yen forward rates, respectively, instead of the spot rate.

The results indicate that the response of changes in the Nikkei to changes in the yen fall in a range of about 1.4 to 1.9 percent. That is, a one percent depreciation of the yen tends to increase the Nikkei by 1.4 to 1.9 percent. More specifically, the Nikkei’s elasticity to the yen spot rate is 1.4, while its elasticity to the one- and two-year forward rates is 1.5 and 1.9, respectively.

On a final (slightly technical) note, because we are dealing with daily changes, our estimates may be sensitive to the time difference between markets in New York, where we obtain price data for U.S. yields and the yen, and Tokyo, where we obtain price data for the Nikkei. Our baseline specification assumes that the Nikkei in the Tokyo session responds to changes in the yen in the preceding New York session (that is, in the prior calendar day). Under an alternative assumption about timing, namely that the Nikkei responds to changes in the yen during the contemporaneous Tokyo session, our results are qualitatively and quantitatively similar. Below, we will apply both sets of estimates to evaluate the role of the yen in recent Nikkei movements.


The Role of the Yen, Recently
The chart below shows our estimates of the contribution of the yen to changes in the Nikkei since January 2010. Alongside the actual level of the Nikkei, we plot the level implied by changes in the yen combined with our estimates of the typical response of the Nikkei to the yen. When the implied series moves closely with the actual series, as was the case in early 2010 and in late 2012/early 2013, it suggests a strong influence of the yen relative to other factors affecting the Nikkei. Similarly, when the series diverge, as was the case in late 2010, early 2012, and the past few months, it suggests that the yen played a less important role. The patterns are broadly similar using the one- and two-year forward rates instead of the spot rate. 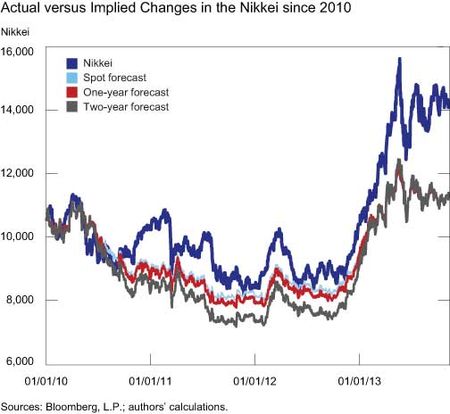 Since late 2012, around the time of the inception of Abenomics, the yen appears to have played an outsized role. In the chart below, we highlight three specific movements in the Nikkei: (1) the 75 percent rise between November 1 and May 22, (2) the 20 percent fall between May 22 and June 13, and (3) the roughly 15 percent rise since then. According to our baseline estimates, we find that the yen accounted for roughly 60 percent of the initial rise in the Nikkei, and about 45 and 20 percent of the subsequent two movements. Under the alternative timing assumption based on yen changes during the Tokyo trading session, the yen accounted for two-thirds of the initial ascent, and about 50 and 20 percent of the subsequent two movements in the Nikkei. 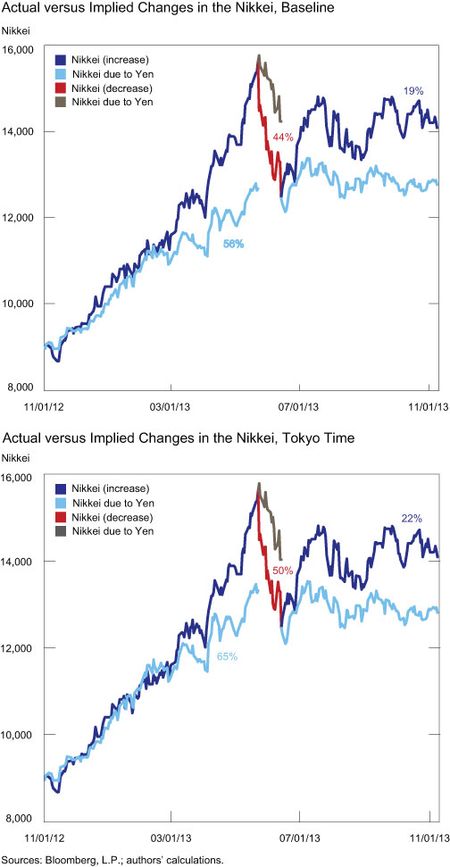 The fact that the yen accounted for such a large share of changes to the Nikkei is informative about how recent monetary policy developments are affecting the Japanese economy, highlighting the role of the exchange rate relative to other channels. We also note that the exchange rate channel seemed particularly important in the initial months of Abenomics, as evidenced by the relatively high share of Nikkei movements attributable to changes in the yen in late 2012 and early 2013. More generally, the methodology we propose can potentially be applied to measure the influence of other currencies on their respective domestic assets.

Andrew Howland is a quantitative analyst in the Federal Reserve Bank of New York’s Markets Group.

At the time this post was written, Benjamin Mandel was an economist in the Federal Reserve Bank of New York's Research and Statistics Group. He is now an economist at Citi Research.
Posted by Blog Author at 07:00:00 AM in Exchange Rates, Exports, International Economics, Macroecon

Why was the Nikkei so sensitive to the currency movement? My hypothesis is as follows: The Japanese economy had kept a long supply chain in the domestic economy for export goods when the yen appreciated during the post-QE period. Japanese suppliers had painstakingly preserved their production capacity during that period. In other words, they were slow in responding to the yen appreciation by exiting from depressed manufacturing or moving their production base out of the country. As a result, the Japanese economy immediately felt the possible effect of the currency move, anticipating an increased demand throughout the supply chain that was preserved in the domestic economy. The painstaking had increased the upward elasticity of economic mood to the exchange rate.