Just Released: Who’s Borrowing Now? The Young and the Riskless!

According to today’s release of the New York Fed’s 2013:Q4 Household Debt and Credit Report, aggregate consumer debt increased by $241 billion in the fourth quarter, the largest quarter-to-quarter increase since 2007. More importantly, between 2012:Q4 and 2013:Q4, total household debt rose $180 billion, marking the first four-quarter increase in outstanding debt since 2008. As net household borrowing resumes, it is interesting to see who is driving these balance changes, and to compare some of today’s patterns with those of the boom period.

The next two charts show contributions to changes in debt balances by borrower age, first when household credit was expanding rapidly in 2006, and then in 2013. For each age group, the charts show the percentage change in aggregate debt outstanding for each type. Thus, summing the numbers for a given loan type produces the overall percentage growth for that type over the relevant four-quarter period. 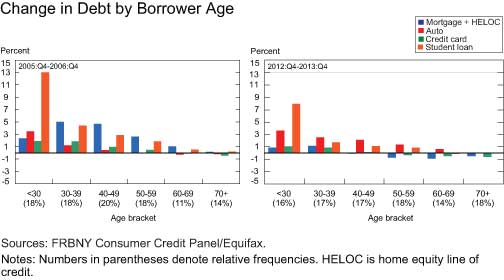 A couple of things stand out. First, overall growth in debt remains considerably more muted in 2013 than it was in 2006, with the exception of auto loans, where 2013 data continued to reflect the strong growth we have been seeing since mid-2011, and student loans. (In the case of student loans, the percentage growth has moderated since 2006, but since the outstanding balance has doubled, the lower percentage growth is associated with comparable dollar increases.) Mortgage and home equity line of credit (HELOC) balances, in particular, grew much more slowly in 2013 than in 2006. Second, for all loan types and in both years, balance increases were mainly driven by younger age groups. Again, though, student loans are an exception: even older student loan borrowers continue to increase their borrowing.

The next two charts break down the same data, this time by Equifax risk score (or credit score) groups. 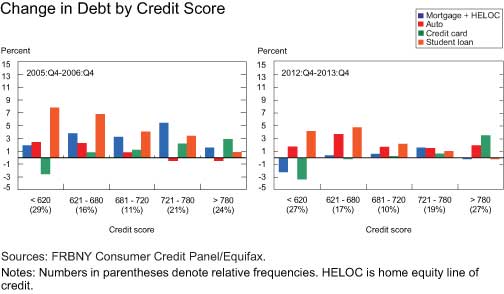 A similar picture emerges for credit card balances. Note, though, that credit card balances for subprime borrowers were falling in 2006, again mostly due to charge-offs, making the increased mortgage balance for that group in 2006 seem all the more remarkable.

There’s been a tremendous amount of attention to the growth of student loans in recent years, and these charts indicate some of the reason why. First, student loans grew the most of any debt product in both periods (in percentage terms). Second, the growth in educational debt, like that of auto loans, is concentrated among the lower and middle credit score groups.

But auto and student loans have been growing for some time, while overall debt continued to fall. In 2013, the increased credit card and mortgage debt among the young and the riskless led to a turnaround in the trajectory of overall debt.

For a more detailed look at net borrowing by age and credit score in 2006 and 2013, please take a look at our interactive graphic.

David Yun is a senior research analyst in the Group.
Posted by Blog Author at 11:15:00 AM in Household Finance, Housing

The young and financially strapped are defaulting on mortgage and credit card debt and running up nondischargeable student debt of dubious utility and, based on the headline, the strongest judgment four Fed economists can muster is a witty headline? Should we assume the Fed sees nothing to worry about it these numbers?