« The Long and Short of It: The Impact of Unemployment Duration on Compensation Growth | Main | Just Released: Who’s Borrowing Now? The Young and the Riskless! »

Every March, the Bureau of Labor Statistics (BLS) issues annual benchmark revisions of employment data for all fifty states, Washington, D.C., and territories such as Puerto Rico. These revisions are based on data from the Quarterly Census of Employment and Wages (QCEW), which provide a complete count of jobs covered by unemployment insurance, in contrast with the preliminary monthly estimates, which are based on a survey of large employers. The main drawback of the QCEW data is that they are released only after a lag of roughly six months. When doing the benchmark revisions, the BLS essentially “trues up” the data by going back two years and incorporating information from the QCEW up through March or June of the prior year.


Tracking the QCEW data can be particularly useful during periods of economic volatility. For instance, a New York Fed study, published in early 2003, used these data to note that New York City’s economy was weaker than previously thought right before the September 11 attacks occurred; this information was useful in estimating the effects of that attack. Getting back to Puerto Rico in the present, the upcoming benchmark revisions—to be released in March 2014—will adjust the preliminary employment data from Spring 2012 through Spring 2013 up or down (in this case, up) to essentially equal the QCEW data. The chart below shows seasonally adjusted employment data as currently reported. 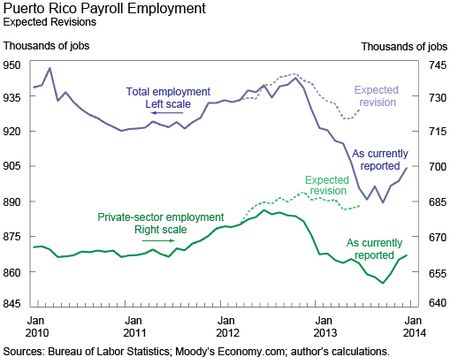 But what about more recent trends—from mid-2013 to now? There are no hard data available from the QCEW yet; but because the initial level is likely to be revised up, there will likely be a comparable upward-level adjustment to these more recent data. That is, the trend of the line should not look much different, but the levels will presumably be comparably higher than currently reported, by perhaps as much as 25,000 jobs, or 3 percent. This also suggests likely upward revisions to the Government Development Bank for Puerto Rico’s Economic Activity Index, because employment is an important component of that measure.


So, which industries are likely to see the biggest upward revisions? Much of the gain should accrue to education and health services (which we expect to be revised upward by 5 percent), professional and business services (4 percent), leisure and hospitality (2 percent), retail trade (2 percent), and manufacturing (2 percent). On the other hand, construction is expected to remain exceptionally weak, and financial activities employment is projected to be revised downward by about 2 percent.


But even after these revisions, Puerto Rico’s economy and labor market can still be characterized as quite weak, as is highlighted in this recent article. Overall employment is still down by well over 10 percent from its 2006 peak and has yet to show any meaningful sign of an upturn. Moreover, the comprehensive employment data only go up to mid-2013, and it is certainly conceivable that there has been renewed weakening very recently. Two of the island’s more timely economic indicators—bankruptcies and a manufacturing-sector survey—signal some weakening in late 2013. And the recent rating agency downgrades of the Commonwealth’s debt are not likely to help matters.


In short, while Puerto Rico’s labor market appears to not have been as weak in 2013 as the currently reported employment data suggest, it nonetheless remains depressed; it remains to be seen if the preliminary signs of softness in late 2013 are a harbinger for the economy’s outlook in 2014.

Thanks for these insightful comments. BM – On the potential implications of the benchmark revisions, yes, the magnitude of the expected revision is indeed quite large. However, the unemployment data are not likely to be substantially altered, as they are largely based on a (separate) survey of households. The recent rise in unemployment has been accompanied by somewhat of an upturn in labor force participation (from very low levels), so it is a mixed signal and difficult to interpret. The expected revision in payroll (establishment survey) data is indeed quite large, and it is expected to show the 2011-2013 trend as flat to positive, as you suggest—at least through mid-2013. As for what could cause such a large discrepancy, that is a good question but it is one for the Bureau of Labor Statistics. It should be noted that there were similar sizable (upward) revisions to the 2012 data when they were re-benchmarked in March 2013 (based on more reliable 2012 data). Cate – You raise some important points. While there is certainly evidence that Puerto Rico has a sizable underground economy—see http://www.newyorkfed.org/regional/puertorico/report.pdf (page 9)—this does not negate the importance of “official” employment counts. Payroll employment has a long track record as a cyclical economic indicator, even if it does understate the true level of productive employment. Moreover, with “above-ground” employment reasonably stable, any significant deterioration in overall economic activity would have to reflect massive weakening in the “underground economy,” but not in the “above-ground” economy—a seemingly unlikely scenario, particularly in a period of fiscal austerity. It should be emphasized also that the revisions to the employment data only incorporate final (complete) data through mid-2013; they will not necessarily make the trends for the second half of 2013 look better, and it is certainly possible that recent job trends will have more of a downward trajectory. As you correctly note, there have been some recent signs of weakness—not only in the bankruptcy counts and manufacturing survey readings noted in this post, but also in electricity generation (as well as consumption), gasoline sales, and cement sales. While these other indicators tend to be quite volatile individually, taken together, they do suggest some recent weakening in Puerto Rico’s economy, as noted near the end of this blog post. In conclusion, it is certainly the case that the island’s economy has been running at an exceptionally weak level—just not quite as dismal as the preliminary employment data for 2013 suggest.

Since over a quarter of Puerto Rico’s economic activity it believed to occur underground it’s useful to assess employment data in the context of other economic measures. The GDB on a monthly basis publishes gasoline consumption and electricity generation/consumption. This data suggests an economy in near collapse: …The Index of Economic Activity (IAE) published by the Government Development Bank (GDB) in December decreased 5.2% when compared with the same month last year. The IAE has been falling over the past 13 months and has contracted over the past five quarters. When compared with November, a drop of 1.0% was observed after three consecutive increases. The four components of IAE experienced declines. Gasoline sales declined 8.9%. Wage employment has decreased from 2.6% to 922.600 persons compared to December 2012. Cement sales decreased 18.0% and electricity generation fell 4.7%. In April 2012 GDB replaced electricity consumption for electricity generation. http://sincomillas.com/vuelve-a-caer-el-indice-de-actividad-economica/ It’s important to look at all economic data when assessing the Commonwealth. http://blogs.reuters.com/muniland/2014/02/15/puerto-ricos-funny-labor-data/

Jason, the difference between the BLS data and QCEW revision seems very large. With a difference in employment of 3-4%, the unemployment rate could be off 2-3%. The revision would also show the 2011-2013 trend as flat/positive rather than negative. What could cause such a large discrepancy between the data sources? Thank you