The Long and Short of It: The Impact of Unemployment Duration on Compensation Growth

How tight is the labor market? The unemployment rate is down substantially from its October 2009 peak, but two-thirds of the decline is due to people dropping out of the labor force. In addition, an unusually large share of the unemployed has been out of work for twenty-seven weeks or more—the long-duration unemployed. These statistics suggest that there remains a great deal of slack in U.S. labor markets, which should be putting downward pressure on labor compensation. Instead, compensation growth has moved modestly higher since 2009. A potential explanation is that the long-duration unemployed exert less influence on wages than the short-duration unemployed, a hypothesis we examine here. While preliminary, our findings provide some support for this hypothesis and show that models taking into account unemployment duration produce more accurate forecasts of compensation growth.

The hypothesis that individuals who are unemployed for long durations have less impact on the behavior of wages than the recently unemployed is not new. Insider-outsider models make this prediction, and a paper by Ricardo Llaudes finds strong support for this proposed explanation in data for European countries. What is new is the relevance of this hypothesis for movements in wage rates in the United States. In particular, conventional models—such as Phillips curve models—have generally underpredicted compensation growth since 2009. These models typically rely on the total unemployment rate as the measure of labor market tightness. If the long-duration unemployment rate has limited impact on the compensation growth process, then its relatively large share in the unemployment rate in recent years could account for the underprediction of standard Phillips curve models. 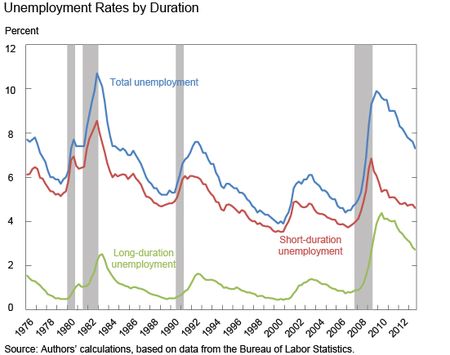 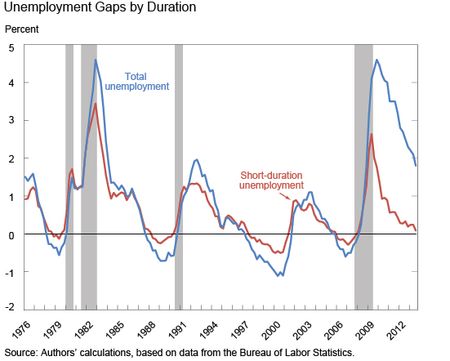 Following an earlier post on compensation growth, we specify a nonlinear compensation Phillips curve model (see this paper by Fuhrer, Olivei, and Tootell for a discussion of modeling the nonlinearity). The model relates the four-quarter growth rate in compensation per hour in the nonfarm business sector, relative to trend productivity growth and long-run inflation expectations, to resource utilization. For trend productivity growth, we use a twelve-quarter moving average of the (annualized) quarterly growth rate of productivity. For expected inflation, we construct a measure for the personal consumption expenditure index (PCE) by adjusting the Survey of Professional Forecasters ten-year expected CPI inflation series to account for the usual differential between CPI and PCE inflation. As in our previous post, we focus on the post-1997 period because it represents a low-inflation environment, based on the level and stability of the expected inflation series, and because we believe the nonlinearity may be especially relevant in such an environment.


We examine both the within-sample fit and out-of-sample forecasts of the models to evaluate the alternative unemployment gap measures. The out-of-sample forecast performance is based on estimation of the model using data through 2007:Q4. With the resulting estimated model, we input the actual values of the unemployment gap, trend productivity growth, and expected inflation series for the post-2007:Q4 period to generate forecasts of compensation growth. The first forecast corresponds to compensation growth from 2008:Q1 to 2009:Q1.


The next chart plots the four-quarter change in compensation growth, the within-sample fit of the models through 2007:Q4, and the post-2007:Q4 out-of-sample forecasts. 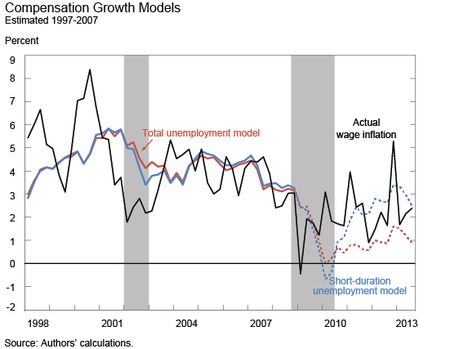 M. Henry Linder is a senior research associate in the Federal Reserve Bank of New York’s Research and Statistics Group.

Robert W. Rich is an assistant vice president in the Federal Reserve Bank of New York’s Research and Statistics Group.

Lisa—We’re glad you enjoyed the post. As far as the model’s implications going forward, they would depend on a forecaster making two judgments. First, the period over which to estimate the coefficient on the unemployment gap variable (Recall that we set the coefficients on the long-run inflation expectations and trend productivity growth variables equal to unity). Second, the future paths of the unemployment gap, long-run inflation expectations, and trend productivity gap variables. The forecasts can then be generated by feeding the paths for the three aforementioned variables through the estimated model. Steffan—Thanks for your question. It is important to stress that we are using a stylized model for compensation growth, and that we also needed to exercise some judgment as far as when to undertake the out-of-sample forecast exercise. We selected 2007:Q4 because we didn’t want the Great Recession to influence the estimated parameter on the unemployment gap variable. Rather, we wanted to evaluate the forecast performance of the models over the post-2007:Q4 period—that is, during the period of the Great Recession and beyond. It is possible that the out-of-sample forecast exercise starting in late 2009 might generate different results. However, such an exercise would rely on different estimates on the coefficient on the unemployment gap variable. There is the additional question of how to calculate the short-duration NAIRU using data through late 2009. Without some construct of the short-duration NAIRU and extending the estimation through late 2009, we can’t make a judgment about the relative performance of the two models.

Very interesting note. I was wondering whether you have tried jumping your model off a later date. My thinking is that your results are likely sensitive to the jump off date. I can imagine that if you jump off late 2009, say, the total unemployment model might track actual wage inflation closer (by predicting flat growth), whereas the short-term unemployment model would call for far too much acceleration. Is this intuition correct? Many thanks.

Hi All, I think the concept of separating long and short duration unemployment and regressing it against wages is very interesting. I am wondering if you did any work on the predictive nature of this? I.e. what are the implications for wage growth going forward? Thank you, Lisa H.