« A New Idea on Bank Capital | Main | Crisis Chronicles: Not Worth a Continental—The Currency Crisis of 1779 and Today’s European Debt Crisis »

Lunch Anyone? Volatility on the Tokyo Stock Exchange around the Lunch Break on May 23, 2013, and Stock Market Circuit Breakers

David O. Lucca and Or Shachar

Stock market circuit breakers halt trading activity on a single stock or an entire exchange if a sudden large price move occurs. Their purpose is to forestall cascading trading activity caused by gaps in liquidity or order errors. Whether circuit breakers achieve this goal is contentious. This post adds to the debate by analyzing intraday price formation on the Tokyo Stock Exchange (TSE) on May 23, 2013—the pinnacle of this past year’s volatility in Japanese stock markets. While no circuit breakers were triggered on the TSE, we focus on trading conditions before and after the daily lunch break, which halted trading amid heightened market volatility on that day. The data seem to indicate that the break did not stem price volatility; rather, its anticipation may have worsened trading conditions.

The Ongoing Debate on the Effectiveness of Circuit Breakers
Advocates of circuit breakers argue that they effectively dampen stock price volatility without interfering with trading activity. For example, if uninformed traders overreact to sharp price moves, trading halts dampen price volatility by allowing informed traders to enter the market and provide liquidity (Greenwald and Stein [1991] and Kodres and O’Brien [1994]). In addition, at times of unusual intraday price volatility, investors may be unsure about the order execution price, which may lead them to refrain from trading altogether and exacerbate trading conditions. Trade halts help these investors obtain information about order imbalances. In sum, trade halts followed by an orderly “open” procedure may help restore the information content of market prices and confidence in them.

Critics of circuit breakers argue that they only postpone the inevitable, especially when market moves are driven by fundamental factors, and can exacerbate volatility once trading resumes (Lehmann [1990]). In addition, some argue that the existence of trading breaks can lead to self-fulfilling volatility spirals. For example, Subrahmanyam (1994), Subrahmanyam (1997), and Cho, Russell, Tiao, and Tsay (2003) contend that investors, knowing that trading is halted after a large drop, have an incentive to sell out of their positions following an initial move to avoid holding a soon-to-be-illiquid position, inducing a cascading price move.

Available empirical evidence does not tip the scale in favor of either camp. Kim and Rhee [1997] examine the TSE price limit system and find it to be ineffective at stemming volatility. Lauterbach and Ben-Zion (1993) find in the context of the 1987 crash that trading halts and price limits had no impact on the overall decline of stocks in the Tel-Aviv Stock Exchange, but rather smoothed short-run return fluctuations. On the other hand, Corwin and Lipson (2000) and Christie, Corwin, and Harris (2002) study trading halts on NASDAQ and find that increased information transmission during the halt results in reduced post-halt uncertainty, consistent with Greenwald and Stein’s (1991) argument.

The TSE’s Trading Lunch Break on May 23, 2013: An Effective Circuit Breaker?
Stocks on the TSE experienced record-high levels of volatility, as measured by the NIKKEI index, for a few weeks starting in the last week of May 2013. After soaring more than 60 percent since December 16, 2012, the day of the Japanese general election, the NIKKEI index tumbled 7 percent on May 23—the largest one-day decline up to that day since the 2011 Tohoku earthquake—on worries about the effectiveness of the economic policies introduced by Prime Minister Abe.

The TSE has circuit breakers at the single-stock level that are based on a stock’s prior day closing price. While circuit breakers were not activated on that day, the TSE has two daily trading sessions separated by a lunch break, which halts the exchange each day and, more importantly for this post, acts as a circuit breaker if the market is in turmoil ahead of the break. If you have never heard of traders shouting “Lunch anyone?” on the trading floor and then leaving en masse for lunch, you are not alone: these breaks are rather uncommon. Among global stock exchanges, only a few Asia-Pacific exchanges have trading lunch breaks, although these comprise the most important Asian exchanges—Tokyo, Hong Kong, and Shanghai—that take one- to two-hour breaks each day. Between 2011 and 2012, both Japan’s TSE and Hong Kong’s HKE shortened their lunch breaks from ninety to sixty minutes, and Singapore’s stock exchange eliminated completely its ninety-minute lunch break. 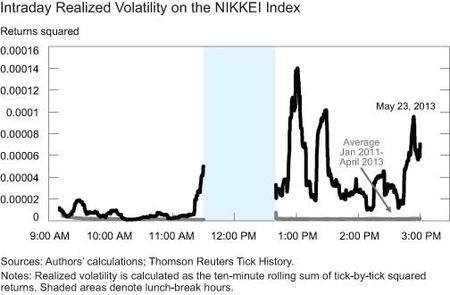 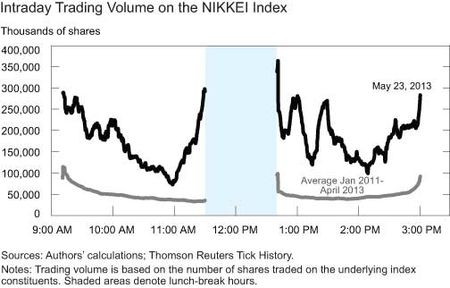 Although we do not have a counterfactual based on these patterns, it appears that the lunch break did not help forestall market pressures on May 23, 2013: volumes and realized volatility were at very high levels in the morning, and they resumed at very high levels in the afternoon after the break. As discussed above, circuit breakers are particularly beneficial when market volatility is driven by microstructure imbalances, but are unlikely to be effective when the turmoil is driven by fundamental factors. If the May 23 imbalances resulted from fundam
ental factors as press reports at the time appear to suggest, it is then not surprising that the lunch break did not ease stress on that day. More importantly, however, market stress appeared to suddenly worsen at around 11:00 a.m., with volume spiking first and then volatility increasing to very high levels. One interpretation of this worsening of trading conditions consistent with the literature discussed above is that investors may have tried to sell out of their positions to avoid the illiquidity associated with the lunch break. Thus, while not helping stem volatility, the lunch trading halt on May 23 may have had the unintended effect of worsening trading conditions ahead of the halt.

David O. Lucca is a senior financial economist in the Federal Reserve Bank of New York’s Research and Statistics Group.

Or Shachar is an economist in the Research and Statistics Group.