« Why Bail-in? | Main | Parting Reflections on the Series on Large and Complex Banks »

Why Large Bank Failures Are So Messy and What to Do about It?

This post is the twelfth in a series of thirteen Liberty Street Economics posts on Large and Complex Banks. For more on this topic, see this special issue of the Economic Policy Review.

If the Lehman Brothers failure proved anything, it was that large, complex bank failures are messy; they destroy value and can destabilize financial markets. We certainly don’t mean to trivialize matters by calling large bank failures “messy,” as it their messiness, particularly the destabilizing aspect, that creates the “too-big-to-fail” problem. In our contribution to the Economic Policy Review volume, we venture an explanation about why large bank failures are so messy and discuss a policy that can make them less so.

Uninsured Financial Liabilities
Our explanation of why large, complex bank failures are so messy hinges around the concept of uninsured financial liabilities (UFLs). UFLs are liabilities that are issued mainly by financial firms—think uninsured deposits or repos, for example. A bond is not a financial liability because large, nonfinancial firms can, and of course do, issue bonds. We borrowed the concept of UFLs from Joe Sommer, whose post appeared yesterday. 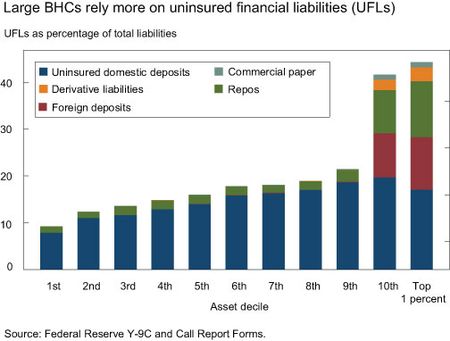 In passing, note that we’re counting commercial paper (CP) in the UFL bucket (even though nonbanks also issue CP) because banks tend to make markets in their own CP, which makes it more like a deposit (than CP issued by large, nonfinancial firms).

UFLs have two properties that contribute to messy failures. First, they provide liquidity or risk sharing that gets destroyed in bankruptcy; that adds to the cost of large bank failures. Second, they’re runnable. As UFL holders run, the bank must borrow to replace the funding it loses to the run or sell assets quickly. The asset sales can lead to deeply discounted prices (that is, fire sales), further imperiling the solvency of the bank and imposing costs on other banks with similar assets. In addition, because other financial institutions demand uninsured financial liabilities from banks because of their money-like properties, the failure of the issuing bank can bankrupt the institutions holding its liabilities (apart from fire sales). The leading example, of course, is the Reserve Primary Fund; that money market fund “broke the buck” after Lehman filed for bankruptcy because it was holding $535 million of Lehman’s commercial paper.

What to Do about Messy Failures?
In our paper, we join Calello and Irvin (2010), Liikannen (2012), Tarullo (2013), and others in calling for a long-term debt requirement, where the debt is “bail-in-able,” that is, it converts to equity in resolution. While we’re hardly the first to advocate a long-term debt requirement as a resolution tool, we make two new points about the policy.

First, we show that, contrary to common assertions, the stabilizing effect of a long-term debt requirement can’t necessarily be achieved by simply requiring the equivalent, additional amount of capital. In particular, we show that if the resolution authority waits until book capital is depleted before putting a failing bank into resolution (a not unreasonable assumption), then requiring x in long-term debt and x in capital is more likely to prevent a messy failure than requiring 2x in capital. We make the point algebraically in the paper, but a numerical example suffices here.

Consider a large BHC with $1 trillion in risk-weighted assets (RWAs). Say the BHC has an equity requirement of $100 billion (10 percent of RWAs) versus one with both equity and bail-in-able debt requirements, a $50 billion equity requirement, and a $50 billion bail-in-able debt requirement. Assume for this exercise that both BHCs have issued the same amount of UFLs and they hold the same type of assets. Note that when the firm has the high equity requirement, all of its remaining liabilities are in the form of UFLs. Now suppose that the BHC experiences solvency-threatening losses. As its losses mount to the critical range that could wipe out equity, from 8 to 9 then 10 percent of its risk-weighted assets, the holders of the UFLs realize that they have no further “buffer” that would limit their exposure if losses grow beyond those levels. If UFL holders anticipate that the resolution authority will not put the BHC into resolution until losses exceed 10 percent of RWAs, they will likely run the BHC. As the run creates fire sales by the BHC that impose losses on other parties, the resolution of the firm will be messy, and the government may feel compelled to bail out the BHC’s UFL holders to forestall the run.

Now consider the BHC with both the $50 billion equity requirement and the $50 billion bail-in-able debt requirement. In this case, losses of half the previous size will exhaust the BHC’s equity. When losses rise from 3 to 4 then 5 percent of RWAs, the holders of the UFLs realize that the firm has losses that equal its equity and it will likely be put into resolution. However, they also recognize that the $50 billion of bail-in-able debt provides “capital in resolution” that provides a buffer against further losses from eroding the value of the firm’s UFLs. Consequently, the UFL holders have little reason to run. As a result, the resolution authority could put the BHC into resolution without triggering a run on it, allowing a greater chance for an orderly resolution. Note that if policymakers were to substitute long-term bail-in-able debt for equity, one would expect more frequent—but less messy—resolutions. By contrast, if long-term bail-in-able debt were deployed in addition to the minimum regulatory equity capital requirement, then, all else equal, resolutions would be no more frequent but would be less messy.

The other point we make about a long-term debt requirement has to do with implementation. While most advocates of such a requirement suggest scaling the requirement by assets or perhaps by risk-weighted assets, we recommend scaling by the amount of UFLs the bank has issued. Because issuing long-term debt is expected to be costly to the firm, scaling the requirement by UFLs would motivate large banks to reduce their reliance on uninsured financial liabilities, which would improve the overall stability of funding by targeting the weak link in the large banks’ funding models. Further, Stein (2011) and others have argued that financial intermediaries have an incentive to overissue short-term money-like liabilities (such as UFLs) because they don’t internalize the social cost of fire sales that such UFLs create (because they’re runnable). Tying the long-term debt requirement to UFL issuance would force large banks to internalize those external costs so long as long-term debt is a more expensive source of funds.

James J. McAndrews is an executive vice president and the director of research at the Federal Reserve Bank of New York.

Joao A.C. Santos is a vice president in the Research and Statistics Group.

Tanju Yorulmazer is a research officer in the Research and Statistics Group.

While most of this is a little over my head, I agree with the premise that putting limits on UFLs is a good way to make our system a little more safe.