Because of the role that the Federal Reserve’s stress test projections play in assessing capital adequacy and because these stress test results are publicly disclosed, some have argued that the BHCs have strong incentives to try to mimic the Federal Reserve’s projections. As Schuermann points out, such convergence could be troubling if it indicated that BHCs were diverting resources away from innovating new stress testing techniques; the less the diversity in modeling approaches in the banking industry, the greater the likelihood that a new, emerging source of risk could be overlooked. To explore this concern, we compare the BHC and Federal Reserve stress test projections in 2013 and 2014 to see if the two sets of results are getting closer over time. Such convergence could be an indicator of decreased diversity of stress testing approaches. More benignly, convergence would also be consistent with less uncertainty about possible outcomes for the BHCs under stressed economic conditions, so that even quite different models generate similar results.

The chart on the left below shows projections of net income from BHCs and the Federal Reserve in both 2013 and 2014 under the Federal Reserve’s severely adverse scenario. In the DFAST calculations, net income is calculated as pre-provision net revenue (PPNR)—equal to net interest income plus noninterest income minus noninterest expense—minus losses. Losses include losses on the loan portfolio, losses on securities held for investment, and, for the largest BHCs, mark-to-market losses on the trading portfolio. The net income projections thus capture estimates of the impact of adverse economic conditions not just on the value of assets held by the BHCs, but also on their broader business activities via projections of revenues and expenses in PPNR. The chart shows cumulative net income over the nine quarters of the stress test horizon in the aggregate for the eighteen BHCs that participated in both the 2013 and 2014 DFAST and CCAR programs. 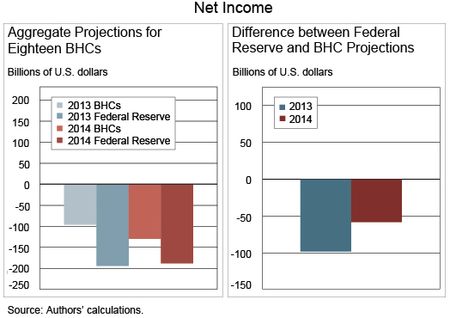 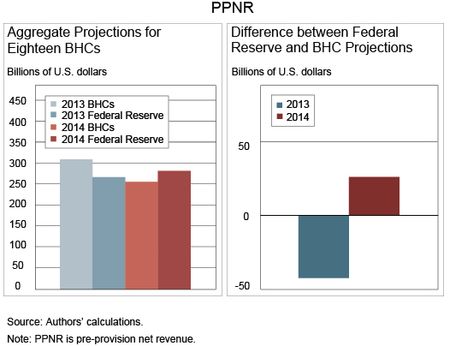 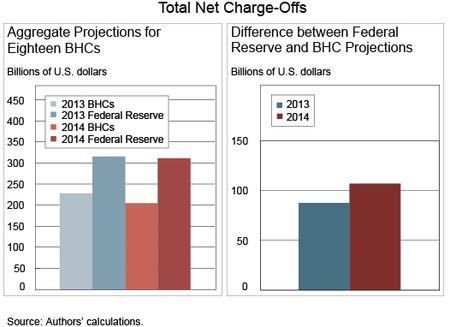 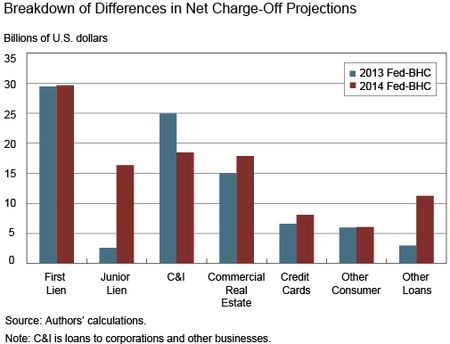 
To control for the impact of the Federal Reserve’s new approach for projecting loan balances, we compare BHC and Federal Reserve projected loan loss rates by type of loan. The figures in the chart show the difference between the weighted average loss rates as projected by the eighteen BHCs and by the Federal Reserve in the 2013 and 2014 DFAST results. The results, in fact, show greater convergence in loss rates than in projected net charge-offs, with the difference between the BHC and Federal Reserve projections decreasing for four of the seven loan categories (first lien mortgages, C&I loans, credit cards, and other consumer loans). The difference increased meaningfully for two of the categories (junior lien mortgages and other loans), however, illustrating that the convergence was not uniform across loan types. 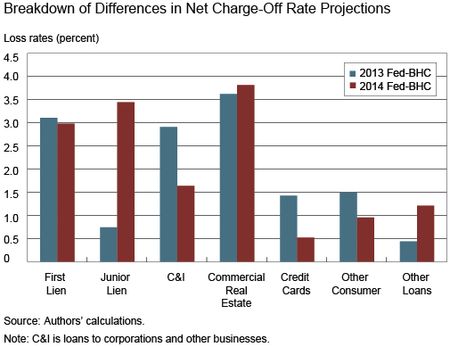 Eric McKay is a research analyst in the Bank’s Research and Statistics Group.

If they recognize it even if a financial panic occurs in Argentina and Portugal when I carry out a stress test by the dot Frank method if the American money market is reliable as for them, the world money market calms down immediately. However, the American trading bank does not have appropriate financing by the securing of capital-asset ratio It becomes the brakes of the growth of the American company There were many internal reserves, but “inflation” is taking root in the Japanese company I am going to throw internal reserves on investment, capital spending, management buyout If “inflation” advances, it is decreased assets. If U.S.A. faces the inflation that there is more than real GDP2 %, the effective utilization of the custody deposit of the trading bank is necessary more and more. Japan is going to go for a “company, trading bank” positive action. U.S.A. is important for the observance of the dot Frank method, but thinks the investment by “the inflation” to be a preliminary stage.