« The Declining U.S. Reliance on Foreign Investors | Main | Turnover in Fedwire Funds Has Dropped Considerably since the Crisis, but It’s Okay » 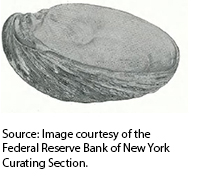 It was 1921 when the New York Fed finally broke ground on their construction project. The excavation began that summer, and with it, foundation work that was deemed the largest undertaking in New York City at that time because the basement floors extended five stories underground to accommodate the vaults. The project broke every city record for yardage excavated, and the workers were the first to tunnel so deeply under that portion of Manhattan Island.

The surprising geological discovery was made a few months into the excavation. The clam shells were found embedded in the clay, sand, and rock when the digging had reached its deepest point at around one hundred feet below street level and more than sixty feet below sea level. The find generated interest amongst the workmen, Federal Reserve officials, and those Fed employees who were geology aficionados. Because of the shells’ unusual location and appearance—they were thick and rough with uneven corrugations—the fossils were soon sent up to Cornell University and the American Museum of Natural History for further study.

Several months later, the Federal Reserve Bank of New York published an article for the staff summarizing the findings about the prehistoric “Federal Reserve clams.” They turned out to be a remarkable discovery because they indicated marine sedimentation in the New York City area during the Pleistocene era, or the late glacial period; the roughness and thickness of the shells signified that they were formed during cold climate conditions. Geologists, however, could not determine whether the clams were originally from the sea bottom that covered the area at that time or were carried later to that spot by flowing water.

Marja Vitti is an assistant curator in the Federal Reserve Bank of New York’s Legal Group.

Thank you for your question! Much of the humor turns on the use of “clam” as a slang word for “dollar,” but one commentator saw the clam as an apt metaphor for the reputed taciturnity of bankers.

What were some of the witty remarks about the Fed Clams?