In February 2014, we administered a survey on housing-related issues to the Survey of Consumer Expectations (SCE) panelists. Our primary goal was to secure rich and high-quality information on consumers’ experiences and expectations regarding housing. The survey, among other things, collected data on households’ perceptions and expectations of the growth in home prices, their intentions regarding moving or buying a new home, and their access to credit. In addition, for homeowners, we collected detailed information on their mortgage debt, past experiences such as foreclosure or refinancing, and expectations regarding future actions, such as taking out new debt or investing in the home. We are releasing the findings as a chart packet today, and in this post summarize some findings.

Household heads who had entered the SCE panel prior to February 2014 were invited to participate in the internet-based Housing Survey. Of 1420 eligible respondents, 1211 (85 percent) participated in the survey, of whom 867 (71.5 percent) were current homeowners. The chart packet is structured as follows: we present (1) demographic and economic characteristics of the sample, (2) statistics regarding consumers’ perceptions and expectations of home price changes, (3) questions that are fielded to both renters and owners, and (4) questions specific to owners and renters, respectively. The general layout of each chart is such that we show the question wording, the relevant subsample to whom the question was directed, and the summary statistics for that question.

As an amuse-bouche, we now present select findings from two sections of the survey.


Home Price Expectations
We asked our survey respondents for the value of a typical home in their zip code, and what they thought the value of that home would be in one year and in five years. Using these responses, we computed respondents’ expectations about future home price changes, at both one-year and five-year horizons. The table below shows that respondents’ mean (median) expectation for home price growth over the next year (February 2014–February 2015) is 4.3 percent (3.3 percent). There is, however, substantial heterogeneity in respondents’ expectations, as reflected by the large standard deviation of cross-sectional expectations. At the five-year horizon, both the average and the dispersion of expectations are lower. 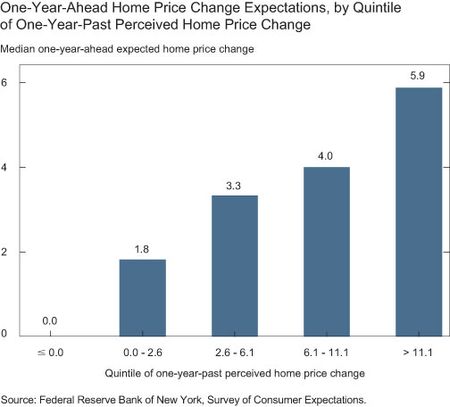 Mortgage Refinancing: Where Did the Money Go?
In another section of the survey, we asked the 576 homeowners who currently have a mortgage about their refinance history. Of these homeowners, 358 (62 percent) reported having refinanced the mortgage on their primary residence at least once. Of those who did refinance, about 45 percent last did so over the past two years.

We asked these respondents how their monthly mortgage payment changed as a result of refinancing. Unsurprisingly, the vast majority of respondents—64 percent (228)—reported that their monthly payment declined. The most common reason cited for the drop was a decrease in the interest rate of the mortgage. The monthly payment reportedly increased for 20 percent (72) of the respondents; common reasons cited for this rise were a decrease in the term or an increase in the balance of the mortgage.

Focusing on the 228 respondents whose payment was lowered, we see that the mean (median) change in their monthly mortgage payment was a decline of $249 ($200); this amounts to a non-trivial average (median) decline of 16.7 percent (14.2 percent) in respondents’ monthly payments. We asked these respondents what they did with the money they no longer had to spend on their monthly mortgage payment, which we refer to as “monthly savings.” The chart below shows that a large proportion of respondents (42 percent) reported that they used (part of) the monthly savings to pay for other expenses, and a third used (part of) it to pay down debt. A sizable minority of respondents (18 percent) reported saving (part of) the monthly savings. This suggests that the high refinancing activity over the period from 2009 to mid-2013 may have helped stimulate consumer spending and contributed to household deleveraging; that said, there may be partially offsetting effects on the investors who hold the mortgages, an issue discussed in the earlier post “Why Mortgage Refinancing Is Not a Zero-Sum Game.” 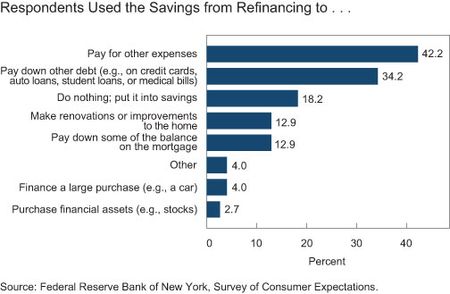 Conclusion
The rich and relatively timely information in the SCE Housing Survey provides a cross-sectional snapshot of consumers’ experiences, behavior, and expectations regarding housing. We plan to field the survey on an annual basis, which will allow us to track changes over time.

In our companion post, which will be released later today, we use data from this survey to explore why more renters aren’t becoming homeowners.

Andreas Fuster is a senior economist in the Research and Statistics Group.

Matthew Cocci is a senior research analyst in the Research and Statistics Group.
Posted by Blog Author at 12:00:00 PM in Inflation