« Introducing the SCE Housing Survey | Main | At the N.Y. Fed: Workshop on the Risks of Wholesale Funding »

Recent activity in the U.S. housing market has been widely perceived as disappointing. For instance, sales of both new and existing homes were about 5 percent lower over the first half of 2014 than over the first half of 2013. From a longer-term perspective, a striking statistic is that the homeownership rate in the United States has fallen from 69 percent in 2005 to 65 percent in the first quarter of 2014. This decrease in homeownership is particularly pronounced for younger households, implying that many of them are remaining renters for longer than in the past. In this post, we use survey evidence to shed some light on what is driving this sluggish transition from renting to homeownership.

Understanding the rate at which renters enter homeownership is important for several reasons. One, first-time homebuyers (mostly former renters) generally account for a substantial portion of home sales. (The share going to first-time buyers has historically amounted to 30 to 50 percent of all home sales.) Two, in the time series, renter-to-owner transition flows tend to lead the business cycle and house price growth.


What could be inhibiting the flow of renters into homeownership? Is it that renters today simply do not want to own because of changed attitudes toward housing, as sometimes hypothesized in the popular press? Or are they prevented from entering homeownership by fundamental factors, such as low incomes and weak personal finances, coupled with difficult access to mortgage credit? To help answer these questions, we use data from a special module on housing-related issues in the New York Fed’s Survey of Consumer Expectations, fielded in February 2014 to 867 homeowners and 344 renters. For more information on the survey, see our earlier post. 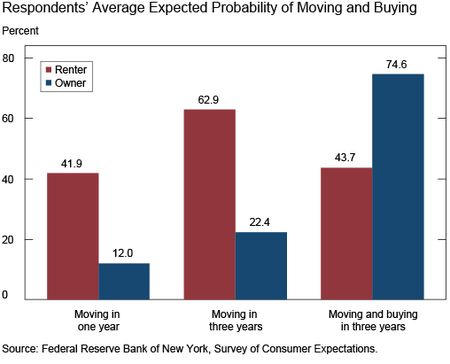 Renters who provided a probability of buying of below 60 percent were asked: “Which of the following are reasons you would rent and not purchase a home if you were to move over the next three years?” They could (and did) pick multiple options from the responses shown in the next chart. 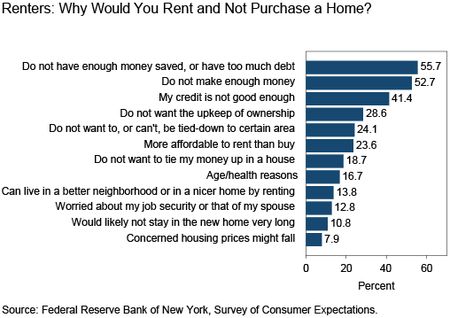 We see that the main reasons preventing renters from becoming owners are weak balance sheets (low savings or high debt), low income, and lack of access to credit. Some cite inherent advantages of being a renter (such as low upkeep and more flexibility), but notably few say that they do not want to own because they are concerned that house prices might fall.

Additional evidence reinforces the view that weak fundamentals and limited access to credit, rather than a lack of desire to own, are preventing renters from buying. The left panel of the chart below relates renters’ expected probability of buying to their income, and shows that the high-income renters in our survey are almost twice as likely to buy as lower-income renters (57 percent versus 31 percent). 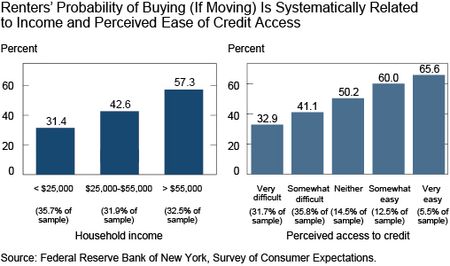 Importantly, these associations are not just “picking up the same thing”—in a regression analysis where we can simultaneously control for income and perceived access to credit as well as other factors (for instance, savings, debt, or demographic factors), both of the variables above remain statistically significant correlates of a respondent’s probability of buying.


Last, we examine how our respondents feel about owning a home as a financial investment. Given the depth of the housing bust in many parts of the country, it might not be surprising if many households shied away from owning a home because of the financial risks involved. However, we do not find much evidence supporting this view—as illustrated by the next chart. 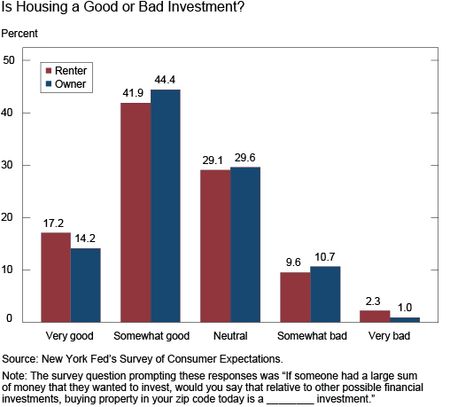 About 60 percent of our respondents think that buying property in their zip code is a good investment, and only 12 percent think it’s a bad investment. Furthermore, current renters are as bullish on housing as current owners, or perhaps even slightly more so. This optimism is also reflected in expectations about future house prices, shown in the table below. We can see that the renters in our sample expect home prices to grow at a slightly faster pace than the owners do, at both the one-year and the five-year horizon. Thus, none of our evidence suggests that renters are reluctant to own for fear of making a bad investment.

Taken together, these findings suggest that with a stronger economy and eased credit standards, flows into homeownership would pick up. However, one caveat is that many potential buyers with relatively low credit scores (35 percent of renters in our sample think that their credit score is below 680) might now be “discouraged,” meaning that they are convinced that they would not be granted credit and thus may fail to apply for a mortgage even after an easing in standards. Also, relaxing credit standards may, of course, have undesirable consequences down the road, since borrowers with lower credit scores are at higher risk of default.

Matthew Cocci is a senior research analyst in the Research and Statistics Group.

The Millennials do their own research and are likely to figure out this market before the rest of us, perhaps even be the force that establishes it. We’ve just ended an incredible 32 year bull run on low interest rates. But rates are rising again, the Fed notwithstanding, and new dynamics are in play. Maybe the early 80’s, the last time rates were rising, hold some of the solutions. Refinance is dead. Mortgage assumption will become important again. Perhaps we should be watching the Millennials instead of the so-called experts.

First of all, I am not a fan of 300+ renters representing the whole country when circumstances, regional economy, job prospects etc are factors at a very micro level like city, county or even part of the city. Another huge factor I consider missing is family issues. Issues like good schools for their kids, family members work and travel; and savings that the family doesn’t want to squander towards down payment (anywhere from 5 to 20%, which is a lot for buying a house over $100,000). A family renting a 2 bedroom apartment would not be looking buy 2-BR condo or house. They are obviously looking to buy something bigger/better. I believe some of these factors play a role in people’s house buying decisions.

It would be interesting to see how this data breaks out by region.

It is really too bad the yo did not explore the perceived stability of the economy and of the country as a whole. That is another metric but if you have a good possibility that your job won’t be there in a year, then you are not likely to do a lot of things but save what you can. If you perceive that nothing is being done to make the country more stable, but know that many assets are now not positive investments and that the old school investing philosophy was just taken to the trash, you will rent before buying. Houses are a place to live, they are not an investment vehicle.

I think you start with a flawed assumption: that there should be more buyers. You start with the decrease in home ownership rates since 2005, but neglect to account for the rise in that rate during the bubble. Which is to say, the rise in the rate was floated on a sea of cheap, easy credit. It is more likely that what we are seeing now is a return to pre-bubble levels, i.e., normality.

Very interesting. I’d like to know if the property tax is considered as an obstacle to buying a home. P.S. Unfortunaey it seems that your print button does not function properly: only the first page is printed.