At the N.Y. Fed: Workshop on the Risks of Wholesale Funding 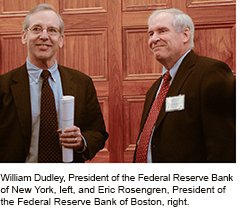 The day’s agenda started with welcoming remarks from William Dudley, President of the Federal Reserve Bank of New York. President Dudley set the stage by reviewing the risks associated with short-term wholesale funding and explaining how the significance of those risks became clear as the recent crisis unfolded. Eric Rosengren, President of the Federal Reserve Bank of Boston, then gave the workshop’s keynote remarks, in which he focused on the role of broker-dealers and how their vulnerabilities to wholesale funding have not yet been adequately addressed.

The presidents’ remarks were followed by various presentations from researchers in the Federal Reserve System, other central banks, and academia. Some presentations explored what happened in certain funding markets during the crisis, others sought to explain why the crisis unfolded the way it did, and still others attempted to clarify market participant behavior at a theoretical level. All of the presentations were followed by questions from the audience, which included market participants as well as policymakers and academics.

The day’s last session considered concrete policy changes to address fragilities in a particular area of wholesale funding, the market for repurchase agreements. Both presentations focused on the “safe harbor” that allows lenders to liquidate certain classes of collateral immediately rather than enter the normal bankruptcy process if the borrower defaults. The first presentation was based on a paper recommending that the safe harbor be limited only to securities backed by the full faith and credit of the U.S. government. The second presentation discussed the costs and benefits of the safe harbor, and proposed that it be limited to only the most liquid securities. An active and spirited debate followed, with some participants advocating their own solutions to the risks arising from this short-term funding instrument. In the conference overall, however, there was little debate that further steps were needed to improve the resilience of wholesale funding markets.

Patrick de Fontnouvelle is a vice president in the Federal Reserve Bank of Boston’s Supervision and Regulation Department.

Michael J.Fleming is a vice president in the Federal Reserve Bank of New York’s Research and Statistics Group.

Nice recap, and thanks for the links to the presentations.