What Is a Settlement Fail?
A settlement fail occurs when a market participant is unable to make delivery of a security to complete a transaction. Such a “failure to deliver” can result from the outright sale of a security, or the initiation or termination of a transaction to borrow or lend a security. The party to whom the delivery was due will also record a fail, in the form of a “failure to receive.” “Gross fails” refers to the sum of fails to deliver and fails to receive.

Past Episodes of Fails
Sporadic and temporary spikes in Treasury settlement fails are not new, with episodes of high fails arising after September 11, in the summer of 2003, and after the failure of Lehman Brothers.

Why Do Fails Matter?
Settlement fails can create liquidity problems for market participants, introduce operational risk, and increase counterparty credit risk because they effectively extend the period before a transaction can be settled. In the extreme, widespread settlement fails can cause market participants to withdraw from the market, adversely affecting market liquidity and potentially raising the U.S. government’s borrowing costs.

Introduction of Fails Charge
In May 2009, the Treasury Market Practices Group (TMPG) introduced a fails charge for the Treasury market, which increased the cost of failing. Since that time, the incidence of fails has decreased considerably. Indeed, the fact that fails spiked in June, despite the charge, is an important reason why the episode attracted attention.

Measuring Fails with FR 2004 Data
One source of data on settlement fails is the Federal Reserve. As described here, the Fed reports, on a weekly basis, cumulative settlement fails to receive and fails to deliver in U.S. Treasury and other securities. (The cumulative nature of the reporting means that a fail gets reported for each day it remains outstanding.) The data only reflect fails involving primary dealers, which report the data to the Fed (via the FR 2004 statistical releases), and for the most part are reported in aggregate (that is, for all Treasury securities as a group). These particular data series are available back to 1990 (2001 for corporate securities). 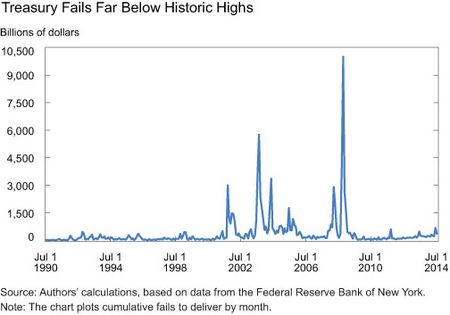 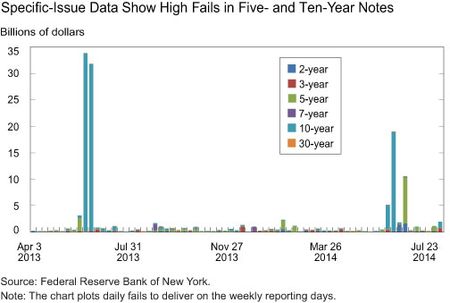 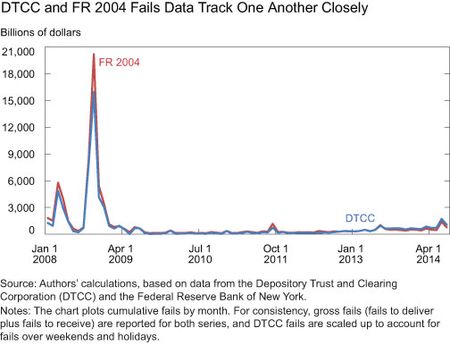 What’s Next?
We motivated this post by noting that fails in June reached their highest level in more than five years. Now that we have reviewed what fails are, why the high level of fails is of interest, and what data are available to measure fails, we are ready to dig into the data. In particular, by examining the data, we are able to discern how fails evolved over the month of June in several key benchmark issues and to measure fails in seasoned Treasury securities (that is, securities issued some time ago). As we show in the subsequent post, fails in both types of issues figure importantly in the high level of fails in June.

Michael McMorrow is an officer in the Bank’s Markets Group.

Thank you, What is the history and statistics for Settlement Fails in Mortgage Backed Securities (MBS) market? Glenn Hautly