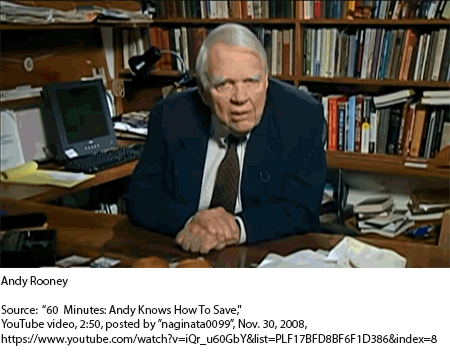 Sometime in the late 1960s or 1970s, possibly before his regular gig as commentator at the end of 60 Minutes, he in fact did a piece called “Bank Names.” It was published in 1981 as part of a compilation titled A Few Minutes with Andy Rooney, which was later combined with two other compilations and published as The Most of Andy Rooney in 1984. You can’t sneak a look inside the 1984 title at any of the online book retail sites; however, you can purchase a used copy of it online for one cent (the last time we checked.) You also can’t watch the broadcast of “Bank Names” online, unfortunately, but you can get an idea of Rooney’s style from a 60 Minutes piece about thrift. Rooney seems to have been interested in and amused by all kinds of names: a search of the finding aid for the Andy Rooney Papers, 1922-2011 at the University of Texas reveals that at one time or another Rooney commented on team names, beauty parlor names, car names, boat names, street names, and farm names.

The “Bank Names” piece starts out by explaining why bank names are so similar to one another:

. . . A bank has to have a name that sounds important and honest, otherwise people would keep their money under the mattress where it belongs.

If a bank has connections in Washington, there's a law that says it has to call itself either National or Federal. After that, they can do what they want with their name and very few of them are satisfied with just one name like that, so they embellish it with something they feel makes it sound better.

. . . They don't seem to worry much about making sense with their names. It's just got to have the right ring to it. Perpetual Federal Savings is the actual name of a bank.

The greatest bank name in America and perhaps in the world is the National Home Permanent Federal Savings and Loan. That has just about everything anyone would possibly want in a bank name. They don't make it clear whether it's the savings or the loan that's permanent but that's one of the mysteries that keeps us all interested in banks.

You can see where all these very similar-sounding bank names started in the List of Member Banks by Groups in Federal Reserve Districts as of May 27, 1914. Here, all the names have “National” in them and the names are very slight variations on a theme. If that was 1914 and Rooney was giving his opinion in the late 1960s or early ‘70s, then there wasn’t much evolution in bank names over that time period. After describing how banks like to have “American” and “Trust” in their names, Rooney continues:

Banks not only like being National, Federal, American, Home and Trusted, they also like being First. The First National Bank of Almost Anywhere, First Union Bank, First Savings and Loan. (In New York there's a Ninth Federal. This is strange because where there's a First Federal, there doesn't seem to be any Second, Third or Fourth Federal, let alone an Eighth. Bookkeeping error, probably.)


In wondering what one would not want to name a bank, Rooney offers up toward the end of the piece a few ludicrous hypothetical bank names:

Just as there are names banks favor, there are names they'd never think of using. Certain businesses seem to preempt groups of names for themselves. Acme, for instance, is most apt to be an exterminating service or a dry cleaner. You wouldn't call a bank the Acme Permanent Home Trust. AAA is a name reserved for car-repair shops and people who fix radiators.

Bel Air is popular everywhere as the name of a roadside motel. You wouldn't find a Bel Air Bank in any town that wasn't called Bel Air itself. Nor would any financial institution call itself a Bankorama or Bankland or Bank City. Those are supermarket names.

Some names that today seem irrelevant were indeed relevant when first created. For example, in the 19th Century before the National Bank Acts of 1863 and 1864 paper currency was the main means of payment and was issued by state-chartered banks or by private banks that operated without a charter.

In this period the currency of a failed bank became worthless (see the 2014 movie The Homesman). For this reason businesses and consumers were reluctant to accept currency from outside their immediate area.

Why would we find a large Wall Street bank named The Irving Trust Company, founded in 1851? In that time period Washington Irving was one of the most famous and trusted individuals in the United States. Therefore, having his image on its currency enhanced the perceived safety and therefore acceptability.

Thank you for the diversion. Interestingly, in Chicago, there is a bank named Fifth Third Bank...I guess they are having a little trouble making up their minds. Hmm...should we be fifth? third? How about 1.6th?

Andy would have had a field day with "Fifth Third Bank."