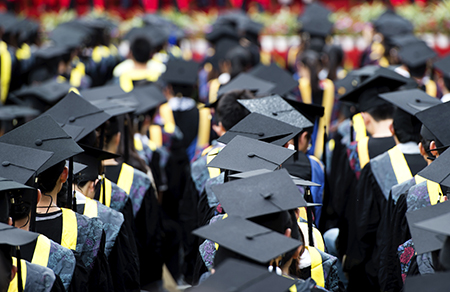 The first portion of the special briefing on student loans described the outstanding aggregate balance and highlighted some changes in borrowing patterns. The aggregate student loan balance has increased steadily, even during the “great deleveraging,” when the balances of other household debt types declined. While student debt may have historically been held by younger borrowers, the balances held by borrowers of all age groups have increased. In fact, the fastest growth has been in balances held by borrowers over age sixty, which increased 850 percent between 2004 and 2014. In 2004, 25 percent of student debt was held by borrowers over age forty; that share climbed to 35 percent by 2014. This change occurred primarily as a result of increases in the number of borrowers over forty, which grew at nearly double the pace of younger borrowers.

Although both the aggregate outstanding student loan balance and the number of individuals with outstanding student debt have been increasing steadily, we have recently seen a decrease in the number of active borrowers—borrowers originating new loans in each year. The number of active student loan borrowers peaked in 2010, at about 12 million, and is now down to about 9 million. This divergence in increasing aggregate balances and decreasing numbers of active borrowers stems from the low repayment rates; we’ll delve into this topic in more detail below.

Influx of Lower-Income Borrowers during Recession, then a Retreat

We identify the Zip code of each borrower at the time they took out their first student loan, and then use the average income in that Zip code to categorize the borrowers into income groups. We find that while there was an inflow of borrowers of all economic backgrounds during the Great Recession, the sharpest growth was for borrowers from the lowest-income areas.

Looking at borrowers who transition into default each year, we find that there was a period of sharp increases—from about half a million borrowers ten years ago to 1.2 million annually in 2011 and 2012. However, in the last two years we’ve seen a small decline in the number of borrowers who transition into default. Accounting for the increase in borrowers, we find that the rate of default increased from 2.4 percent in 2004 to 3.6 percent in 2012, and then eased a bit in 2014, to 3.1 percent.

Our February 19 post, “Looking at Student Loan Defaults through a Larger Window,” categorizes borrowers by their school-leaving cohort and concludes that the three-year window typically used to look at cumulative defaults by cohort is likely too short to capture the bulk of students who will eventually default. Further, we find that the cohort default rate schedules are worsening over time.

In addition, we look at the five-year cohort default rates by the age of the borrower when they began repayment. We find that the default rates are highest for borrowers in their thirties, who are also the borrowers with the highest balances. For the 2009 cohort, half of thirty-something borrowers have either defaulted or become seriously delinquent.

In our February 20 post, “Payback Time? Measuring Progress on Student Debt Repayment,” we find that the repayment rates—even for borrowers who have not defaulted on their loans—are very low. Using the framework described in that post, we identify borrowers whose balances (five years later) are higher than their balances upon leaving school, and then use their originating Zip codes to categorize borrowers by income.

In our new analysis, we find that about half of the 2009 cohort are demonstrating problems paying back their loans (having either defaulted, gone delinquent, or paid down none of their balance); these troubled borrowers, however, are dominated by borrowers from the lower-income Zip codes, where 70 percent of borrowers have had some sort of repayment problem. In contrast, 37 percent of borrowers from the highest-income areas have had repayment difficulties.

In new analysis based on the FRBNY Consumer Credit Panel (a panel based on Equifax credit report data), we find a slowdown in new student loan originations and in student loan default and delinquency rates in the past two years. Overall student debt balances continue to grow, however, reflecting low repayment and high delinquency rates of cohorts that left school during the recession. The increase in payment difficulties of more recent cohorts can be attributed primarily to borrowers coming from lower- and middle-income areas. This finding is not only of relevance for investigating the causes and consequences of growing student debt and delinquencies but is of key importance in determining the focus, impact, and beneficiaries of policy proposals aimed at alleviating the growing student debt burden.

I continue to applaud the NY Fed’s work in identifying the impact of student debt on the economy. I especially like that the analysis focuses on repayment rates. I firmly believe that the real economic impact of student debt is in the repayment rate and the cumulative effect of delinquency on the borrowers’ credit scores. What would the economy look like, all other things held equal, with the same amount of education and no student debt? It would be better. The best possible impact student debt can have on a consumer and the economy is neutrality, but it is most likely, no pun intended, a real drag.

While other forms of revolving credit are good indicators of current economic activity, student debt is different, it looks back. Student debt is more in the category of “faultless” debts like medical debt – a past debt that the borrower had little choice over taking on that (the existential value of health and education aside) just reduces their current disposable income. It is pre-baked into their credit score. Both the repayment status and the repayment plan selected affect the score. In this case though, a slower amortization through federally supported repayment plans like Income Based Repayment that lower the monthly payments and, thus, lowers the debt-to-income ratio, could mean greater credit and greater economic activity.

Getting borrowers into the right repayment plan is key to reducing the drag of these loans on their credit scores and the economy.

The concept of deleveraging applies primarily to existing borrowers, such as a reduction in credit card balances of existing borrowers. Student loan debt is different, in that there is significant growth in outstanding debt by a constant influx of new borrowers with significant new debt even as existing borrowers make progress in paying down their debt. This is not just a characteristic difference between revolving and non-revolving debt, but also a different between student loans and other non-revolving consumer debt, such as home mortgages and auto loans. Consumers borrow to purchase cars and homes on numerous occasions periodically throughout their lives, while student loans tend to be borrowed in just one or two concentrated intervals. Perhaps FRBNY should develop a new model of deleveraging that separates the impact of new borrowers from existing borrowers. After all, new student loan volume to new borrowers each year is about $100 billion, while payments on existing student loan debt total about $70 billion each year. The measure should also consider the impact of typical term differences. Credit cards and auto loans are repaid over months to years, while student loans and mortgages are repaid over decades (although mortgage refinance might be considered to put mortgages in the months to years category).

The decrease in active borrowers may have more to do with the end of the countercyclical effect than a decrease in repayment rates. During an economic downturn, high unemployment rates cause consumers to return to postsecondary education to obtain credentials to make themselves more marketable in the job market. These consumers tend to demonstrate more demand for student loans and student financial aid due to short-term income deficits. In addition, parents of traditional college students (age 16-21) may be feeling more financial pressure due to investment losses (e.g., S&P 500 declined 39% in 2008, causing a sharp decrease in the value of college savings plans), job loss and salary reductions, and so may be more likely to borrow. During the economic recovery, the reverse happens, leading to a decrease in the number of borrowers. Those who do borrow, however, may borrow more due to the failure of federal and state government grants to keep pace with increases in college costs. In fact, new federal education loan dollar volume has decreased for each of the last two years.

Normalizing deferment, forbearance and delinquency rates by borrowers in repayment is not a new concept. Fitch and Moody's have been doing this for many years. The annual SEC filings of education lenders, such as Sallie Mae, also report these rates as a percentage of loans in repayment. Unfortunately, the FRBNY characterization of its analysis has incorrectly suggested a serial decline in the normalized data as opposed to just a (not-so-new) understanding. The FRBNY analysis does not include any longitudinal comparisons to determine whether overall non-repayment and repayment rates as a percentage of loans in repayment has been deteriorating. A similar analysis I did as part of a 2009 report on the proposals for gainful employment regulations yields similar figures, suggesting that there has been no change in performance. There are also some flaws in the FRBNY analysis. For example, while the FRBNY analysis distinguishes borrowers in an initial in-school deferment or grace period from borrowers whose loans entered repayment, the FRBNY analysis treats subsequent deferments as a monolithic entity instead of distinguishing borrowers in an economic hardship deferment or unemployment deferment (which do denote financial difficulty) from borrowers in a military service deferment or subsequent in-school deferment (e.g., a Bachelor's degree recipient enrolling in graduate or professional school).

Progress in paying down the loan balance five years into repayment is an interesting measure of loan performance. It combines the impact of various non-paying statuses, such as delinquency, deferment, forbearance and default, with the impact of longer repayment terms as well as differences in interest rates and fees. Assuming a 6.8% interest rate and a level amortization, borrowers of Federal Stafford Loans will have repaid 42.5% of the loan balance at repayment in 10 years, 33% in 12 years, 23.5% in 15 years, 14.5% in 20 years and 6.0% in 30 years. (The balance at repayment ignores the impact of capitalized interest and adding loan fees to the principal balance on differences between the amount disbursed and the amount in repayment.) So, 3% progress in paying down debt is suggestive of long repayment terms and a high level of borrowers in non-paying statuses (which can include in-school deferment for graduate school, not just financial pressure), while 30% progress in paying down debt is suggestive of a 10 year repayment term with a small amount of deferment.