Just why might compensation per unit of risk decline with maturity or beta and thereby make BABgov profitable? One possibility is that leverage constraints differ across investors and over time. Market participants, such as mutual fund managers with rigid limits on borrowing, tend to bid up high-risk assets to boost returns. Meanwhile, investors with fewer constraints, such as hedge funds, can exploit this lower required compensation by shorting “over-priced” high-beta assets and buying low-beta securities with greater reward-to-risk ratios. Notably, these investors can borrow the precise amount required to neutralize their exposure to overall headline risk, so that the long and short sides of the trade net to zero market exposure or beta. Again, other studies report that this strategy works across and within asset classes, as BAB supposedly supports RP “out-of-sample.”

Yet already, without any new empirical analyses, a contradiction with low-risk investing is hard to miss. Consider investors who participate exclusively in the U.S. Treasury (UST) market, in the realm of BAB. They might overweigh the back end of the term structure, increasingly so with leverage constraints. Such preferences push prices (yields) on, say, ten-year USTs higher (lower) relative to shorter maturities. Now consider investors with balanced mandates who participate in both the UST and the U.S. stock markets, as in the broader context of RP. The same leverage constraints bind, but notably, now across rather than within asset classes. They may well overweigh not longer-dated Treasury securities, but riskier shares, to boost returns. Preferences push stock prices higher and expected equity returns lower, but they also may pressure bond prices (expected returns) lower (higher) as these particular investors “reach for yield.” Therefore, market participants with balanced mandates, and especially those also with longer-duration liabilities, may offset those with narrower remits. Heterogeneous preferences, therefore, ambiguously buffet longer-dated yields. Without further clarification, BABgov says leverage-constrained investors buy UST duration to boost returns, whereas RP implies they sell it. If anything, BABgov perhaps does not confirm, but contradict, RP.

Some Evidence: First, the Good News

Nonetheless, turning to the data, published BABgov results are among the most compelling. Few BAB strategies have greater returns per unit of risk, even BAB using U.S. shares, and the magnitude of absolute returns on BABgov tends to rival gains on the S&P 500. Indeed, as my staff report fully details, and as noted in the following chart, BABgov is robust to some alternative methodological choices (regarding return frequency, beta estimation, etc.), using data from May 1964 through December 2013. 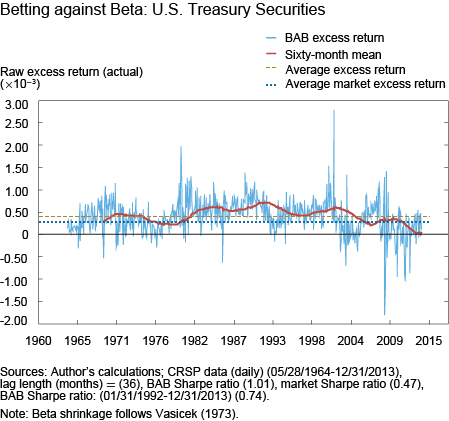 The rolling five-year geometric return, the black line, suggests that returns have waned meaningfully in recent years, perhaps amid the zero nominal lower bound. However, monthly BABgov portfolios returns, the blue line, do not correlate any more closely with the S&P 500 than the UST market index. BABgov is also insensitive to whether the strategy is constructed with a market beta that includes U.S. shares, as opposed to USTs exclusively. These results broadly suggest that profitability does not necessarily owe to “selling volatility” or exposure to occasional
flights-to-safety into the back end of the term structure, as skeptics might suspect.

The first issue is to test BABgov out-of-sample using ten previously unexamined markets, including Germany, France, the Netherlands, Belgium, Italy, Spain, Japan, the United Kingdom, Canada, and Switzerland. This cross-sectional evidence might help uncover conditional information relevant to more efficient strategies, but in short, none of these ten cases produce as compelling returns as for the United States from the early 1990s through late last year. My staff report includes more analyses, but perhaps the simple chart below suffices. Sample-average SRs for representative cases do decline with maturity (or in effect for bonds, with beta), but not to the extent as for the United States, the black line. This result suggests that BABgov simply may have limited breadth as a trading strategy and might owe to idiosyncratic, rather than systematic return, patterns. 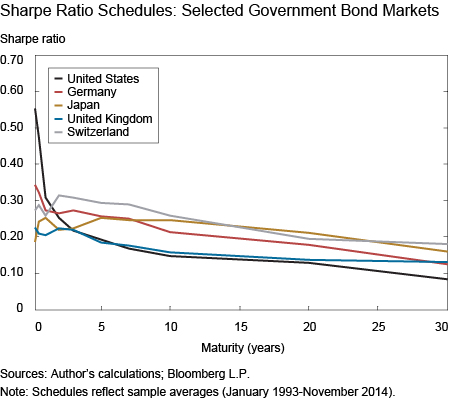 The second issue addresses the fact that the “risk” in “low-risk investing” refers to the second and not the third moment of asset and portfolio returns, in other words, the variance (or standard deviation) instead of the skew. Some behavioral perspectives suggest otherwise, but the standard view is that investors prefer positively skewed asset returns. Under the CAPM, securities that decrease portfolio variance are more expensive. Correspondingly, investors may pay premiums for assets that tilt return distributions to the right, either by contributing to positively skewed portfolio returns or by offsetting negatively skewed results. The question for BABgov is whether longer-dated USTs have lower required returns, not given leverage constraints per se, but because they contribute more to the observed positive skew of Treasury market returns than shorter-dated USTs. If so, BABgov returns might reflect fair compensation for the risks related to skew that investors take, as opposed to any true anomaly or free lunch.

Again, my staff report includes more analyses, but some evidence suggests as much. I tested constrained BABgov strategies that neutralize coskew exposures, so that the low-beta long side and the high-beta short side of the trade have the same skew as the market. These portfolios had notably lower returns and SRs than the standard unconstrained strategy. However, just as leverage-averse investors may reach for yield and bid up high-beta prices to harvest second-moment-based premiums, there is no direct evidence that to boost gains they similarly pressure required returns on assets with greater coskew risks lower. Even so, these analyses recommend a broader consideration of relevant “risks.”

Indeed, a third issue is perhaps more straightforward but hardly less problematic for BABgov, which is essentially a strategy defined with respect to an important but nonetheless single risk, namely beta. BABgov portfolios may be neutral to the market beta, but other risks might lurk and account for “anomalous” patterns. A multivariate framework seems required, because indeed fixed-income researchers have widely acknowledged that it’s not just the level but also the slope and the curvature of the term structure that matter for bond returns. An alternative BABgov strategy is to own low-beta bonds and short high-beta securities, as usual, but to insure that both sides of the trade have the same exposure to these first three principal components of the term structure. Unfortunately, as the following chart shows, BABgov gains vanish when hedged to a more complete set of common risks. 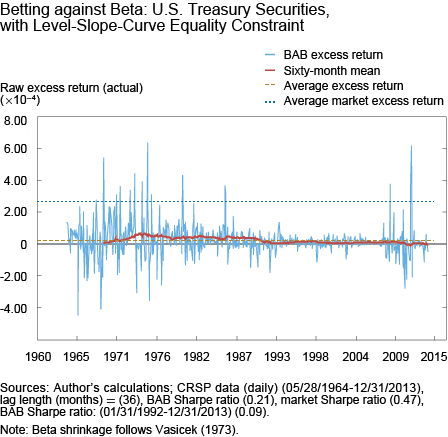 To appeal again to further reasoning, this result is perhaps not surprising. Affine term structure models (ATSMs) are flexible enough to capture empirically the inverted schedule between SRs and maturity shown in the second chart, notably without any reference to, say, leverage aversion. The problem for BABgov as a proper anomaly is that ATSM-implied hedge ratios by construction outlaw arbitrage and therefore excess returns. Levered portfolios that are long low-beta bonds based on the inverted SR schedule, but comprehensively hedged with respect to the underlying ATSM factors, simply cannot produce a free lunch.

Whether BABgov produces sufficiently “true” risk-adjusted returns aside, the patterns under investigation have notable policy relevance. For example, a key mechanism underlying BAB is leverage constraints, which obviously relate to broader financial conditions. Also, the schedule of SRs, or roughly speaking forward term premiums by maturity, seems germane to central bankers who try to “remove duration risk” most efficiently from markets with outright government bond purchases. In addition, elevated SRs at the front end of the term structure may puzzle, if not offend, central bankers who painstakingly hone their communication strategies. Investors might chronically require greater compensation per unit of volatility amid business cycle fluctuations as well as increased reward for bearing uncertainty about near-term monetary policy responses, notably to varying degrees over time and across countries.