The FR 2420 Data Collection: A New Base for the Fed Funds Rate -Liberty Street Economics

« From the Vault: Separating News and Noise … and Jokes | Main | Crisis Chronicles: The Panic of 1825 and the Most Fantastic Financial Swindle of All Time »

The fed funds market, as defined by Regulation D, consists of unsecured borrowing of U.S. dollars, usually overnight, by depository institutions (DIs) either from other DIs or from certain other eligible entities, including government-sponsored enterprises. This market is important to the implementation of monetary policy because the Federal Open Market Committee sets a target or a target range for the fed funds effective rate (FFER) to achieve its dual mandate of maximum employment and price stability. For decades, the FFER has been calculated as the volume-weighted average of rates on fed funds trades that were arranged by major brokers on the previous day.

There are two main areas in which FR 2420 data can improve the process for producing the FFER: higher transaction volumes—and therefore a larger base of activity from which to calculate the rate—and transaction-level detail for better data monitoring. With the FR 2420 data, the Fed can better assess the quality of the data submissions, in line with recent international focus on best practices for reference rates. The FR 2420 data are currently collected from 163 DIs, of which 53 are domestic banks or thrifts and 110 are branches or agencies of foreign banking organizations. Since July 2014, the average overnight borrowing in the fed funds market reported via the FR 2420 form has been around $50 billion and the number of reported overnight transactions in fed funds has averaged about 300 per day, never dropping below 200. These overnight fed funds volumes have been roughly 25 percent larger than volumes observed in brokered data, largely because FR 2420 data include both transactions intermediated by brokers and transactions that are negotiated directly between two counterparties.

Given these benefits, the Fed plans to use FR 2420 data to eventually replace brokered data in calculating the FFER. Based on data received so far, the change in data source does not seem likely to have a significant impact on FFER levels. As the chart below shows, the rolling five-day average of the volume-weighted medians—the rates at the 50th percentile of transaction volumes—as calculated from FR 2420 and brokered data have tracked each other closely, although on occasion nonbrokered activity generates small differences between the two. Likewise, the five-day rolling average of the volume-weighted 10th and 90th percentile rates, the rates at or under which 10 percent or 90 percent of the volume occurs, have behaved very similarly in the FR 2420 and brokered data.

The overall distribution of rates is also quite similar in the two data sets (see chart below). As in the brokered data, the majority of volume in the FR 2420 data occurs close to the brokered FFER. And, since July 2014, when the New York Fed started collecting FR 2420 data, the daily volume-weighted average rate calculated from FR 2420 data has differed from the FFER very little, by less than 1 basis point on average.

Note, however, that there has been some activity at higher rates (around the rate at which the Fed pays interest rate on excess reserves, currently 25 basis points) that is not currently captured by the FR 2420. This volume mainly represents smaller banks borrowing from other banks, whereas the Federal Home Loan Banks, which are the primary lenders in the market, comprise the majority of the volume occurring near the FFER. 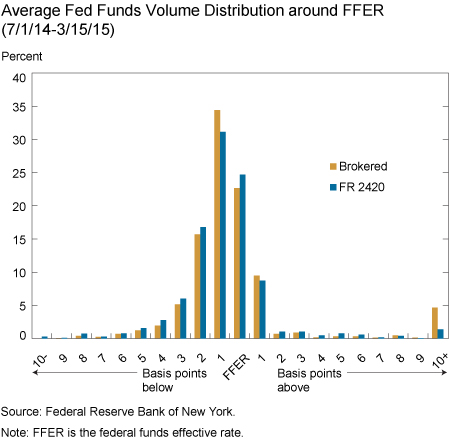 Before making changes to the FFER, the Fed is proposing revisions to the FR 2420 data collection in order to refine, among other things, the criteria by which reporting banks are selected and by which borrowing transactions are classified as fed funds. These enhancements are meant to capture even more activity, including more of the bank-to-bank transactions seen in the brokered data that occur above the interest rate paid by the Fed on excess reserves.

Marco Cipriani is a Research Officer in the Federal Reserve Bank of New York’s Research and Statistics Group.


Jonathan Cohn is an analyst in the Bank’s Markets Group.
Posted by Blog Author at 04:30:00 PM in Fed Funds, Financial Markets, Monetary Policy