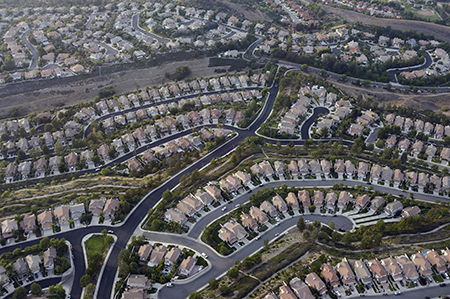 The Federal Reserve Bank of New York today released results from its 2015 SCE Housing Survey. The survey, administered to 1,205 U.S. household heads in February, is a follow-up to the one conducted in February 2014. The purpose of the effort is to collect rich and high-quality information on consumers’ experiences and expectations regarding housing. The survey collects data on individuals’ perceptions and expectations of the growth in home prices, intentions regarding moving or buying a new home, and their access to credit, among other things.

The main findings from the 2015 survey can be summarized as follows. Households expect home price growth to continue at a similar pace as they did a year ago. On average, households expect mortgage rates to increase in coming years, but at a moderate pace. Attitudes towards housing as a financial investment remain overwhelmingly positive. Finally, most renters express a preference for owning over renting if they had the necessary financial resources. As was the case last year, a majority of renters believe it would be difficult for them to get a mortgage, although responses suggest a slight easing in perceived credit access.

The housing report can be viewed here, with the detailed background report available here. We discuss one particular finding from the survey next.


Housing as an Investment
Respondents are asked about how good an investment buying property in their Zip code would be today, on a qualitative scale (from “very good” to “very bad”). The same question was asked in the 2014 survey, so we can see how attitudes towards housing have evolved over the past year.

The chart below shows the distribution of responses for renters and owners separately for this year’s and last year’s surveys. Looking at the 2015 survey, we see that more than 60 percent of both renters and owners think that buying property in their Zip code is a (very or somewhat) good investment, and only about 10 percent think it is a bad investment. 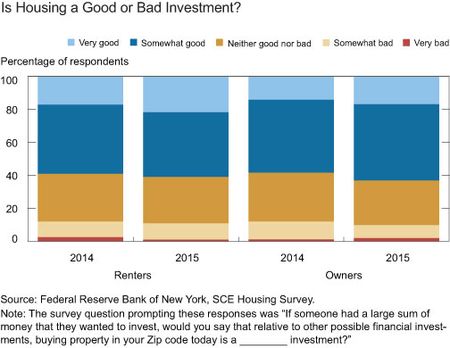 A comparison of the 2015 responses with the 2014 responses shows little difference in how renters answered this question over time. However, owners seem to have become more bullish since last year’s survey. The proportion of owners who think that housing in their Zip code is a good investment increased from 58.5 percent in the 2014 survey to 63.2 percent.

Micah Smith is a senior research analyst in the Research and Statistics Group.
Posted by Blog Author at 10:15:00 AM in Household Finance, Housing