Have Dealers' Strategies in the GCF Repo® Market Changed?

In a previous post, “Mapping and Sizing the U.S. Repo Market,” our colleagues described the structure of the U.S. repurchase agreement (repo) market. In this post, we consider whether recent regulatory changes have changed the behavior of securities broker-dealers, who play a significant role in repo markets. We focus on the General Collateral Finance (GCF) Repo market, an interdealer market primarily using U.S. Treasury and agency securities as collateral. We find that some dealers use GCF Repo as a substantial source of funding for their inventories, while others primarily use GCF Repo to fine-tune their repo positions. Recent regulatory changes, such as the supplementary leverage ratio (SLR), may be contributing to reduced lending in the GCF Repo market.

The GCF Repo Market
A repurchase agreement (repo) is effectively a collateralized loan, structured as a paired sale and future repurchase of securities at specified dates and prices. In a general collateral repo, a cash borrower settles a transaction by providing as collateral any security that meets the criteria of a relatively broad collateral class, such as Treasury securities.

GCF Repo is a service provided by the Fixed Income Clearing Corporation (FICC). It was introduced in 1998 by FICC and the two clearing banks Bank of New York Mellon and JPMorgan Chase to reduce transaction costs and enhance liquidity in the interdealer repo market. FICC serves as the counterparty to all trades. The market is blind-brokered so the cash lender and borrower do not know each other’s identity. Netting members of FICC’s government securities division are eligible to participate in GCF Repo.

The GCF Repo market is perceived as an attractive source of funding for dealers who may lack stable access to cash lenders in the broader repo market. Additionally, some members reportedly find GCF Repo useful as a way to manage liquidity, take positions, or “fine-tune” positions due to unexpected flows throughout the day. The overall daily size of the GCF Repo market is about $460 billion on average over our sample period from March 2011 to December 2014.

BHC-affiliated dealers lend to non-BHC dealers
To understand the flows of cash in GCF Repo and how they have changed, we follow Adam Copeland, Isaac Davis, and Antoine Martin’s “An Empirical Analysis of the GCF Repo Service,” forthcoming in Economic Policy Review. For each dealer on each day, we calculate the net cash position as the difference between their repo lending (reverse repo) and repo borrowing to determine whether they are net cash lenders or borrowers in the GCF Repo market. A positive net cash position implies that the dealer is receiving cash across all collateral classes, and a negative net cash position implies that the dealer is lending cash. We classify dealers into three groups: dealers affiliated with a large bank holding company (BHC) (more than $500 billion in assets); dealers affiliated with a small BHC (less than $500 billion in assets); and dealers who are not part of a BHC. Below we plot the monthly average net cash position for each group. 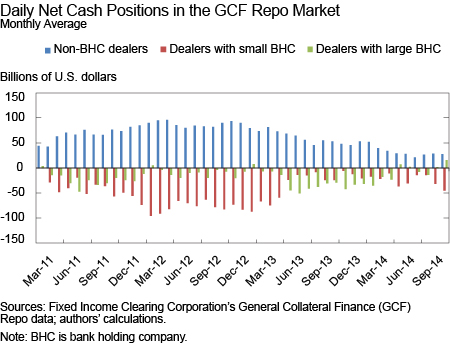 As a group, affiliated dealers typically lend cash to unaffiliated dealers. The funding raised by non-BHC dealers peaked at $93 billion per day in December 2012, but since the beginning of 2013, there is a general decline in activity, which reached its lowest level in our sample period in August 2014. This downward trend could be due to the SLR, which was issued as a final rule by the Federal Reserve and the Office of the Comptroller of the Currency in July 2013, and other capital rules, which may have resulted in less appetite to lend into the GCF Repo market as BHC dealers’ balance sheet capacity had been reduced.

Among the lenders, dealers affiliated with small BHCs tend to lend more than dealers affiliated with large BHCs. Until May 2013, small BHC dealers supplied the majority of funds, but as the funding decreased, large BHC dealers began providing more funding than small BHC dealers. Next, we consider the extent to which the recent decline in net cash positions come from a change in the strategies pursued by dealers, for a given level of GCF Repo activity, or general decline in activity without a change in strategy.

Decline in net cash positions is primarily due to a general decline in activity
To understand whether the recent decline in net cash positions reflects a change in dealers’ strategies (for a given level of GCF Repo activity) rather than a general decline in activity without a change in strategies, we focus on two collateral classes which account for the vast majority of GCF Repo trades: U.S. Treasuries and Fixed Rate Agency (FFFR) mortgage-backed securities (MBS). The top panel of the chart below plots the daily net position in U.S. Treasuries (total repo minus total reverse repo) for each dealer group and the bottom panel plots the daily net position in FFFR MBS. A negative position means that the group of dealers has promised to deliver these securities, on net, each day. The chart shows that while dealers affiliated with large BHCs were delivering U.S. Treasuries and receiving FFFR MBS, a collateral downgrade strategy, they switched to lending against both types of collateral early on, in the beginning of 2013. In contrast, the strategy of dealers affiliated with small BHCs remained relatively stable, though the dealers have reduced their net lending considerably since August 2013. 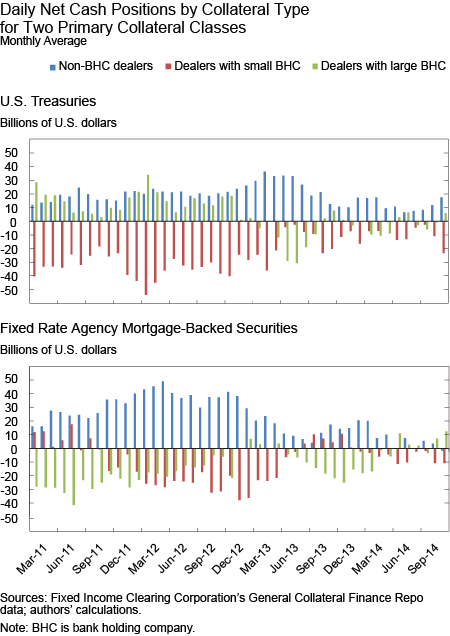 More generally, while BHC-affiliated dealers pursue both repo and reverse repo strategies, non-BHC dealers are concentrated primarily in repo, as can be seen in the table below, where we report the distribution of net-to-gross ratios by dealer group, where the net-to-gross ratio for a dealer on a given day equals the sum (across collateral types) of the dealer’s net positions for the day divided by the sum of its gross positions. The ratio is positive if the dealer is receiving cash at the end of the day, negative if the dealer is delivering cash, and zero if the dealer is receiving equal amounts of cash and collateral.

The majority of large BHC dealers pursue mixed repo and reverse repo strategies, with 46 percent having a negative net-to-gross ratio and 34 percent having a positive ratio but different from ±1. In contrast, small BHC dealers are more likely to follow a pure strategy, with 31 percent of these dealers conducting either only repos or only reverse repos. These patterns hold both early on in the sample and after net activity declined in August 2013.

Since we do not observe a change in the propensity of dealers to receive cash or to deliver cash over the sample period, it seems that the downward trend in net activity is due to reduced activity rather than a change in dealers’ strategies. 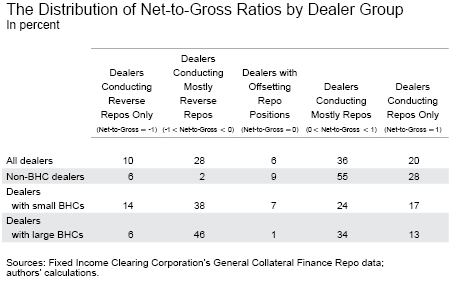 Recent regulatory changes make repo trading more expensive
In addition to regular Basel III risk-based capital requirements, the SLR requires BHCs with more than $700 billion in assets or $10 trillion in managed assets in the United States to hold additional capital against all assets on their balance sheets. These rules increase the total cost of maintaining a large balance sheet for broker-dealers affiliated with BHCs. In order to meet the new capital requirements some BHC-affiliated dealers might choose to reduce their repo activity. While these regulatory changes do not seem to have changed dealers’ GCF Repo strategies, they do seem to have reduced the amount of activity that dealers are willing to participate in. Similarly, the introduction of the Federal Reserve’s overnight reverse repo facility in 2014 may also have had a negative effect on the volume of GCF Repo activity, as it provided an alternative to dealers lending cash.

Nina Boyarchenko is an economist in the Federal Reserve Bank of New York's Research and Statistics Group.

Or Shachar is an economist in the Research and Statistics Group.
Posted by Blog Author at 07:00:00 AM in Dealers, Financial Institutions, Financial Markets, Repo