« A Discussion of Thomas Piketty’s Capital in the Twenty-First Century: Does More Capital Increase Inequality? | Main | Have Dealers’ Strategies in the GCF Repo® Market Changed? »

The Effect of the Strong Dollar on U.S. Growth 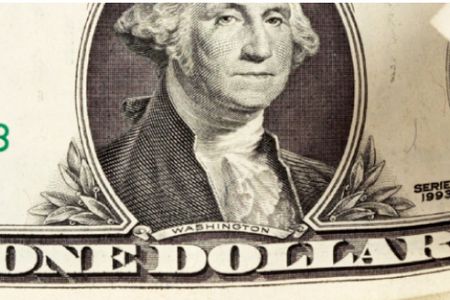 The recent strengthening of the U.S. dollar has raised concerns about its impact on U.S. GDP growth. The U.S. dollar has appreciated around 12 percent since mid-2014, rising against almost all of our trading partners, with the largest gains against Japan, Mexico, Canada, and the euro area. There was far less movement against newly industrial Asian economies and hardly any change against China. In this blog, we ask how the strength of the dollar affects U.S. GDP growth. Although the dollar can impact the U.S. growth through a number of different channels, we focus on the direct impact through the U.S. trade balance. Our analysis shows that a 10 percent appreciation in one quarter shaves 0.5 percentage point off GDP growth over one year and an additional 0.2 percentage point in the following year if the strength of the dollar persists.

Exchange rate movements affect the trade balance by changing the prices of domestically produced goods relative to goods produced abroad, an outcome that in turn affects relative demand. A stronger dollar makes U.S. imports relatively cheaper than domestically produced goods, which pushes consumers to substitute towards imported goods and provides firms with relatively cheaper inputs from abroad. Though both consumers and importing firms benefit from lower import prices, the data show that the extent of the benefit is limited because exchange rate movements are not fully passed through into prices seen by U.S. buyers. We estimate that a 10 percent rise in the dollar results in a 3.8 percent decline in nonoil import prices. Instead of adjusting prices charged to U.S. consumers by the full exchange rate change, firms exporting to the United States adjust their profit margins. Because import prices do not adjust by the full extent of the appreciation, the increase in demand for import quantities in response to the appreciation is moderated. The New York Fed trade model suggests a 10 percent appreciation of the U.S. dollar in one quarter (which then persists) results in 0.9 percent increase in real import values, as shown in the table below.

On the export side, a stronger dollar makes the price of U.S. exports more expensive when converted into foreign currency terms, reducing U.S. export growth. In order to try to maintain competitiveness, U.S. firms adjust their markups rather than pass on the full exchange rate appreciation into foreign prices. That is, U.S. exporters take a hit on their profit margins in order to maintain market shares. The New York Fed trade model suggests that a 10 percent appreciation of the U.S. dollar is associated with a 2.6 percent drop in real export values over the year. Consequently, the net export contribution to GDP growth over the year is 0.5 percentage point lower than it would have been without the appreciation and a cumulative 0.7 percentage point lower after two years. 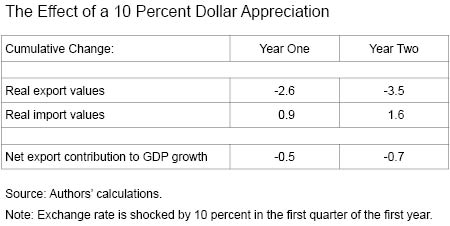 There are many factors that determine how big of an impact exchange rate movements have on local prices, and hence on real import and exports values. Some studies have shown that firms tend to set different prices in different markets for the same goods. Their prices depend on the demand conditions in each market, the exporting firm’s market power, and its import intensity. An additional, related, factor contributing to low exchange rate pass-through is what is referred to as “local currency pricing,” where firms choose to invoice their exports in foreign currency, making their prices “sticky” in that currency. For example, if U.S. imports are priced in dollars, then a dollar appreciation would not change the import price at all in U.S. dollars for existing orders and would mechanically translate into higher markups of firms exporting to the U.S. market. Although the prices for new orders can change, there is evidence of some rigidity in price setting.

What is special about the U.S. case is that its export prices (and import prices) are mostly denominated in U.S. dollars whereas other countries tend to set prices in the currency of the destination market. This pattern of invoicing combined with price stickiness can help explain the much bigger impact on exports than imports shown in the table. This is consistent with previous literature that has found that pass-through into U.S. import prices is much lower than pass-through into U.S. export prices in local currency terms.

The New York Fed trade model does not include other channels through which the exchange rate can also affect U.S. growth. For example, the decline in U.S. exporters’ profitability could reduce their domestic investment spending on plant and equipment. On the upside, lower prices of imported inputs reduce firms’ marginal costs, which increase firms’ profitability. Moreover, lower import prices increase consumers’ disposable income, boosting consumption of both imports and domestically produced goods and services. Such indirect effects are potentially important, but they are a lot more difficult to quantify.

When the dollar is strong U.S. energy prices decrease making the production costs of American made goods much lower. Your analysis doesn’t seem to take this into account. Foreign energy prices do not decrease as much because many foreign governments artificially control their own energy costs.

A related point. The strengthening of the dollar against other currencies, which is to say an increase in the price of the dollar, is a reflection of its increasing scarcity. This can only mean that US monetary growth is falling. So not only will the dollar continue to strengthen but it will strengthen even faster if the Fed raises rates as it plans to. And of course that will impact US growth as your article shows. The following graph shows the fall in YoY money growth rates. http://www.philipji.com/item/2015-05-15/the-monetary-contraction-continues-at-a-slower-clip It has fallen even more since then.