« The Survey of Consumer Expectations Turns Two! | Main | A Discussion of Thomas Piketty’s Capital in the Twenty-First Century: Does More Capital Increase Inequality? »

Historical Echoes: The Woman Who Would Be Bank 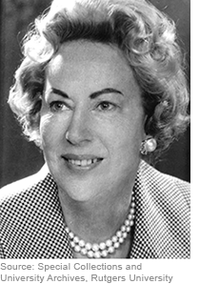 Mary Roebling (1904-94) was the first woman to serve as president of a major U.S.  bank. (She was also the first woman governor of the American Stock Exchange, among numerous other honors.) According to a New York Times obituary, she came into her position through a combination of happenstance and preparation:

Mrs. Roebling’s own economic power came initially through inheritance, but she increased it vastly once it fell into her hands. She was bequeathed a large block of Trenton Trust stock by her millionaire second husband, Siegfried Roebling, whose family had long been prominent in engineering and cable manufacturing. He was a great-grandson of John A. Roebling, who designed the Brooklyn Bridge, and a grandson of Col. Washington A. Roebling, who completed its construction.

Siegfried Roebling died in 1936, of a heart attack. Mrs. Roebling’s father and father-in-law then urged her to try her hand at running the bank. She had preparation for the job: she had worked for a Philadelphia investment house while taking business courses at night and, the two men told her, she had another important qualification, common sense.

The rest was banking history. She took her husband’s seat on the bank’s board and, on Jan. 21, 1937, was elected president. 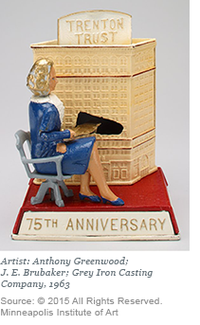 Here’s the fun part: she had 200 commemorative mechanical banks made in her image! (See alternate views and moving images of other banks.) That’s right—and the last time we looked, one was selling on eBay for over $1,300 and another on an auction site for over $1,800. Why were these banks made?

According to a 1967 issue of Hobbies Magazine,

she sets aside certain time to the avocation of collecting mechanical banks and has a deep interest in her collection. Sometime prior to 1963, the 75th anniversary of her bank the Trenton Trust, Mrs. Roebling came up with the idea of creating a mechanical bank to commemorate the occasion. She wanted the bank to have the characteristics of the old cast iron type and be made in the same fashion and material. This required a bit of ingenuity on her part, and to begin with she acquired the services of the well known sculptor, Anthony Greenwood of Philadelphia, Pa. He worked for some six months to develop the original idea and two working models were made. These at a later date completely and mysteriously disappeared.

It was decided by Mrs. Roebling to make a limited edition of 200 of the banks, each to be numbered. The Grey Iron Casting Company of Mt. Joy, Pa., made the bank from designs by J.E. Brubaker. The Mary Roebling-Trenton Trust mechanical bank was designed to symbolize the free enterprise system upon which our country’s economy thrives—to commemorate 25 years during which Mrs. Roebling has served as President and Chairman of the Board of Trenton Trust—to show the bank’s location, significant in historic times, as well as today, where it is the highest building in Trenton.

According to the descriptive entry for the bank on the artsconnected.org website, here is how this mechanical bank works:

bank building with female figure seated in front in blue dress; lever on back activates woman’s arm which “shovels” coins into the side of the building and then a sign saying “Trenton Trust” pops out of the top of the building like toast.

Here’s a different description of the bank’s mechanics from the Hobbies Magazine article (we like the detail about the movement of the head):

The bank operates as follows: A coin of any size, including a silver dollar, is first placed on the key as shown in Picture 1. The Trenton Trust sign on top of the building is then pressed down and it snaps into place (the bank is pictured with the sign up to better illustrate same). A lever, located to the back of the building, is then pressed down. Mrs. Roebling’s right arm raises and moves forward causing the coin to slide from the key into the bank, Picture 2. At the same time her head turns toward the building and the sign atop the building springs into the position as shown. All parts except the sign return automatically to position on releasing the lever. The sign is again pushed down and the bank is ready for another coin.