« From the Vault: Supplementing a Monetary Policy Syllabus | Main | Historical Echoes: How Members of the Society for Creative Anachronism Make Money » 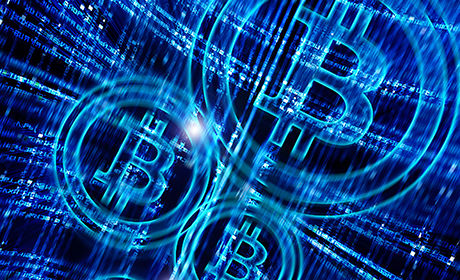 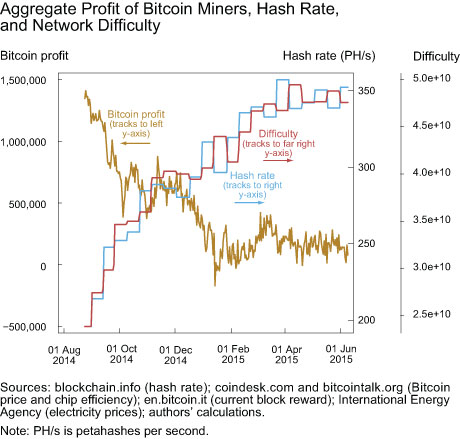 Our estimate of the aggregate daily profit of bitcoin miners dropped below zero for several days in mid-January 2015. The average hash rate over the two-week period following the realization of negative profit was noticeably lower than the average hash rate over the preceding two-week period. It appears that diminished profit may have prompted some miners to exit the market or to reduce their mining efforts. This lower average hash rate caused the network difficulty level to adjust downward at the next retarget, and the relative increase in the ease of mining attracted additional hashing power to the network.

There were also declines in the two-week average hash rate even before the network experienced negative aggregate profit in January. In particular, in both of the two-week difficulty periods beginning in mid-November 2014, the average hash rate was lower than in the previous two-week period. Our calculations suggest that aggregate mining profit at the time was above $800,000 per day. In order to explain these earlier reductions in the hash rate we need to decompose our previous measure of aggregate profit into its individual components.

Breakeven Electricity Price
One important assumption underlying our calculations is that half of the bitcoin miners receive industrial energy pricing and half receive residential energy pricing. However, in evaluating miners’ entry and exit decisions, it may be more informative to consider miners’ breakeven price of electricity instead of assuming that all miners face the average market price. When a miner’s electricity price is higher than her breakeven price, we expect her to either exit the market or upgrade her mining technology.

In addition to the price of electricity, a second important input into the electricity cost of mining is the average efficiency (in terms of Joules per gigahash (J/GH)) of the chips used in mining rigs. When calculating the aggregate mining profit shown above, we measure the chip efficiency of the entire network using a ninety-day rolling window estimate of efficiency. On the first day that a new, more efficient Application Specific Integrated Circuit (ASIC) is available, we assume that 1/90 of the network mines using the new chip and 89/90 of the network continues to mine using the previous most efficient chip. Every day, we assume an additional 1/90 of the network converts to the current most efficient chip until after ninety days the newest most efficient chip has been universally adopted.

We believe this estimate achieves a reasonable balance between miners’ incentives to upgrade to more efficient chips as soon as they become available and reports about delays in the shipment and receipt of new chips. However, under different assumptions about network chip efficiency, our estimates of miners’ breakeven electricity prices will vary. While our ninety-day moving average estimate makes sense for calculating aggregate network profit over time, an individual miner’s entry and exit decisions should be driven by the average efficiency of her own chips and the electricity price she faces.

In the next chart, we compute the breakeven electricity price at which mining profit equals zero for three generations of ASICs with varying energy efficiency. This assessment ignores other variable costs, such as the opportunity cost of the operator’s time, and any fixed costs that need to be renewed, like leases on warehouse space. We have no way to estimate these costs. The implication is that miners might shut down in the long run even when our profit calculations are positive. However, we should expect some miners to shut down immediately (that is, in the short run) if profits fall below zero according to our calculations.

From the chart, we see that the breakeven electricity price for miners using first-generation (1G) ASICs fell below both industrial and household electricity prices in September 2014. As the price of bitcoin continued falling throughout the fall, it seems likely that such miners would have begun to exit the market and may have been behind the initial decreases in the network hash rate in November. 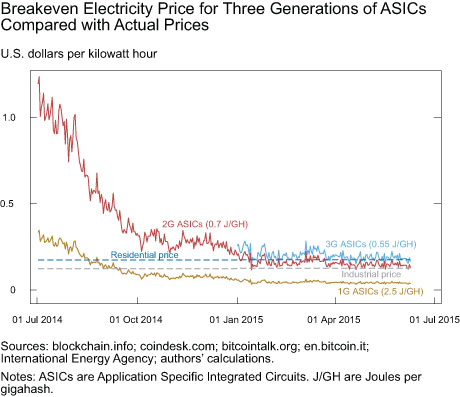 Future Block Reward Halving
The Bitcoin protocol follows a declining block reward schedule, whereby the number of bitcoins awarded for confirmed blocks halves every 210,000 blocks. The halving of the block reward is a significant negative shock to miners’ revenue, similar to a large discrete price decrease.

The estimated time of the next block reward halving is July 2016. At that time, the block reward will decrease from 25 to 12.5 bitcoin per block. Assuming electricity costs do not drop considerably in the next year, the 2016 block reward halving will cause aggregate daily mining profit to drop below zero. It is unlikely that improvements in chip efficiency will be sufficient to offset this revenue decrease. Increases in chip efficiency (in terms of J/GH) have gotten smaller over time (see the chart below). All else equal, in order for miners to break even after the block reward halves, we estimate that mining chips must achieve an efficiency rating of at least 0.3 J/GH, which is nearly twice as efficient as the most efficient chip currently available (0.55 J/GH). This does not imply that the 2016 block reward halving will be problematic. Our analysis suggests that when marginal profit falls below zero, the market is able to equilibrate. 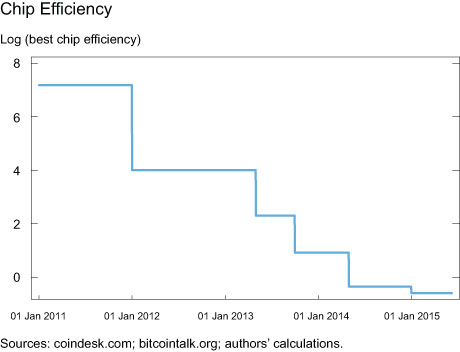 Following the drop in the block reward there is likely to be adjustments to hashing at both the intensive and extensive margin. We expect the miners with the highest electricity cost of mining—due to inefficient chips or high energy prices or both—to drop out while miners with lower costs will continue mining, albeit possibly at a reduced rate. As the aggregate hash rate declines, the aggregate network profit should return to zero. We may, however, see increased concentration of mining power in locations with the cheapest energy costs.

Note: We are grateful to Peter Diamond for many helpful comments and suggestions.

Rosa Hayes is a former senior research analyst in the Bank’s Research and Statistics Group.
Posted by Blog Author at 07:00:00 AM in Financial Markets