Historical Echoes: The Fed’s Ties to the Barbie Doll 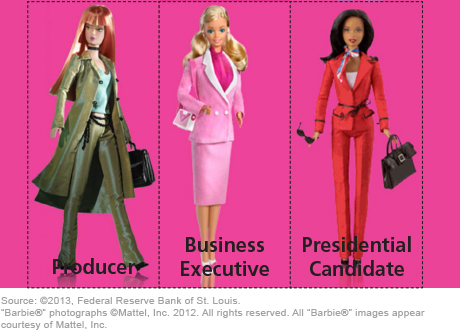 Barbara Campagna, architect, has blogged extensively about the social, psychological, and political implications of Architect Barbie (in this blog post, she states that her friends and colleagues were responsible for the launch of Architect Barbie). Campagna was instrumental in the 1996-99 cleaning and restoration of the Federal Reserve Bank of New York’s landmark building, leading the “effort to document and analyze the interior and exterior of the building, and restore its exterior and key interior spaces.” About the FRBNY cleaning and restoration, she states in her blog: “Developing the specifications for cleaning the Federal Reserve Bank of New York was one of the most complex preservation projects I have completed.”

In 2013, Barbara Flowers (yes, another Barbara; almost everybody’s named “Barbara” in this post), economic education specialist at the Federal Reserve Bank of St. Louis, compiled a vivid lesson plan for students in grades 6 through 12 called Barbie® in the Labor Force. Here’s the lesson plan in summary:

Since 1920, women have more than doubled their share of the labor force. More women are working, but has the type of work they do advanced similarly? What were the top occupations for women 20, 60, and 100 years ago, and how do those occupations compare with women’s choices today? In this lesson, students use primary documents to review historical trends in women’s share of the labor force and chosen occupations. Using Barbie careers as a time line, they speculate as to why Barbie represented certain careers for girls at different points in time since 1959. They choose which career Barbie might represent next year and explain that choice in a one-page essay.

The lesson plan includes many photographs of Barbie in her various occupations, intended to be cut out and glued to a timeline. It would not hurt most adults to go through this lesson plan.

In case you are wondering: Mattel so far has never come out with a Banker Barbie. Maybe it has something to do with the stereotypical banker’s attire? The closest you may get to “Banker” might be Business Executive Barbie.