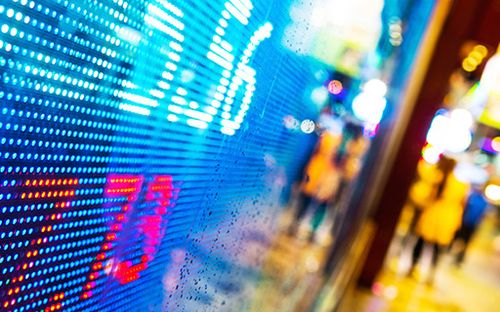 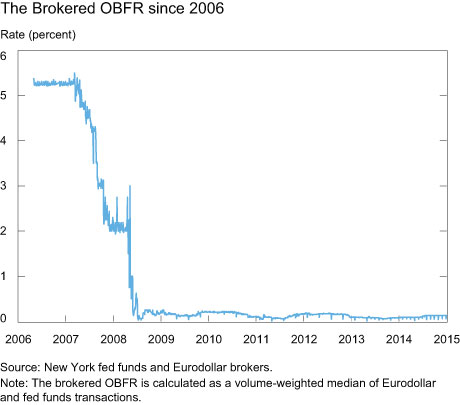 The OBFR and the Fed Funds Rate

The OBFR is intended to complement the effective fed funds rate, so it is useful to see how the two rates would have compared since 2006. For the purpose of this exercise, we compute a volume-weighted median fed funds rate using brokered data, the “brokered fed funds rate.” 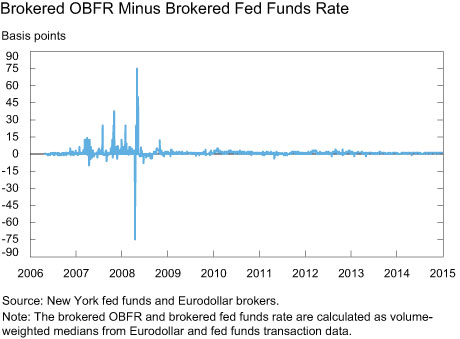 In order to understand the relationship between the brokered OBFR and the brokered fed funds rate, we use brokered data to look more closely at dynamics in the Eurodollar and fed funds markets. U.S.-based banks consider fed funds and Eurodollars to be similar sources of overnight dollar funding. They can borrow fed funds onshore from other banks or from certain other eligible entities, including government-sponsored enterprises (GSEs). U.S.-based banks can also borrow Eurodollars from a broader set of lenders, such as U.S. money market funds. The Federal Reserve imposes a zero reserve requirement on net Eurodollar deposits of U.S.-based banks, effectively treating these deposits the same as fed funds. As a result, under most circumstances institutions borrow fed funds and Eurodollars at similar rates. Since 2006, the average spread between the median rates in each market was 1.9 basis points, as shown in the chart and table below. 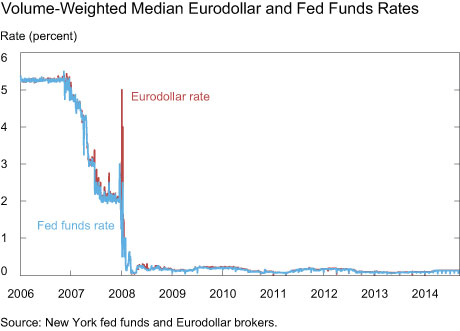 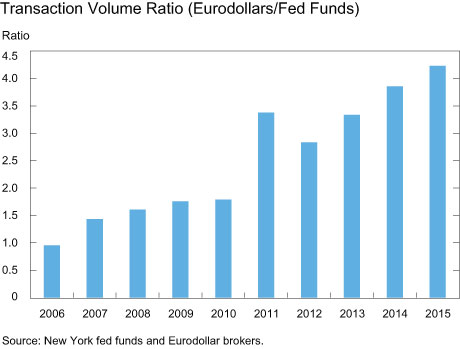 Once published, the OBFR will provide a new measure of overnight U.S.-based bank funding costs. Since it is based on a larger set of transactions than other existing rates, it will offer market participants a more comprehensive gauge of overnight unsecured borrowing costs for U.S.-based banks. In normal market conditions, the OBFR and the fed funds rate are likely to track each other closely, although differences may emerge in periods of stress.

Adam Spiegel is a senior research analyst in the Bank’s Research and Statistics Group.

Fed funds and Eurodollar transactions are reported separately by brokers based on the counterparty to the trade and where transactions are booked. Fed funds are borrowings from exempt entities, such as depository institutions or Federal Home Loan Banks, according to Regulation D and are booked in domestic branches. Eurodollar transactions are borrowings from a broader group of lenders, such as money funds, and are booked in IBFs or offshore branches. In the FR 2420 report, which will be used to publish the EFFR and OBFR next year, reporters are required to indicate if transactions are fed funds or Eurodollars according to the report instructions. For Regulation D, see http://www.ecfr.gov/cgi-bin/text-idx?tpl=/ecfrbrowse/Title12/12cfr204_main_02.tpl. For FR 2420 report instructions, see http://www.federalreserve.gov/reportforms/forms/FR_242020151020_i.pdf.

Nice post. I have a basic question though. How do you label any given transaction as a fed fund or Eurodollar? Thanks in advance