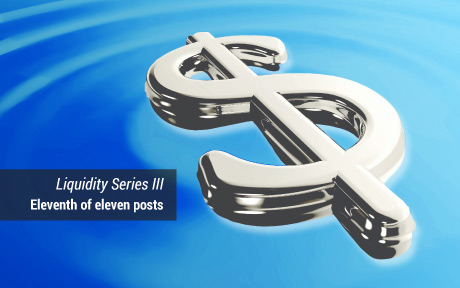 The announced liquidation of Third Avenue’s high-yield Focused Credit Fund (FCF) on December 9, 2015, drew widespread attention and reportedly sent ripples through asset markets. Events of this kind have the potential to increase the demand for market liquidity, as investors revise expectations, reassess risk exposures, and fulfill the need to trade. Moreover, portfolio effects and general fears of contagion may increase the demand for liquidity in assets only remotely related to a liquidating firm’s direct holdings. In this post, we examine whether FCF’s announced liquidation affected liquidity and returns in broader corporate bond markets.

In the weeks and months preceding its liquidation, Third Avenue’s Focused Credit Fund experienced an ever-increasing outflow of investor assets, similar to a run. The investor redemptions followed poor performance of the fund and forced FCF to try to sell assets to meet those redemptions. This created a direct and mechanical need for immediacy in the segment of the corporate bond market in which FCF specialized. There are at least two reasons to think that the corporate bond market in aggregate could experience liquidity strains in such a scenario.

First, a publicized risk event like FCF’s announced liquidation may raise expectations of redemptions at other funds. To meet those expected redemptions, fund managers (all else equal) may prefer more liquid bonds, which they can sell at a moment’s notice and with low cost. Similarly, these managers may have a preference for safe bonds that can prevent their funds from declining further in value during a flight to safety. If fund managers have these motives in aggregate, the market can become temporarily one-sided, leading to shortages of safe and liquid bonds and hence strains on market liquidity more broadly.

Second, FCF’s liquidation occurred against a backdrop of heightened uncertainty in corporate bond markets. Rising credit spreads, increased costs for default insurance, declining commodity prices, uncertainty about global demand, and a possible change in the Federal Reserve’s monetary policy stance were all common themes affecting markets at the time. Against that backdrop, a highly observable shock like FCF’s liquidation could lead to a broad-based repricing of risk and a subsequent need to hedge and reduce exposures, further increasing the demand for immediacy.

Which bonds were sensitive to news about Third Avenue?

To examine how FCF’s closure affected broader market liquidity, we compute several well-known liquidity measures for each bond with a time-to-maturity of less than ten years in the Trade Reporting and Compliance Engine (TRACE) database. We then sort bonds into quintiles of performance on December 11, as measured by their return relative to their average price the previous day, so as to examine bonds grouped by their price sensitivity to news about Third Avenue. Lastly, we average the individual bond liquidity measures by quintile. Note that, while FCF’s liquidation was announced December 9, the news did not become public until late on December 10, and market commentary suggests that the initial market reaction came December 11.

The following table shows that the bonds with the worst returns on December 11, 2015, tended to (1) have higher spreads relative to Treasury securities, (2) have higher yields at issuance, and (3) be more likely to be high yield (HY). These findings support the view that FCF’s announced closure triggered a wider sell-off of risky assets.

The chart below shows, however, that not all bonds had negative returns that day. In fact, the best performing bonds (those in the highest 20 percent, or quintile) experienced positive returns. This group of bonds was more likely to be investment grade than other quintiles, suggesting that their positive performance reflected a flight to safety. The chart also shows that the bonds with the lowest returns on December 11 (those in the bottom quintile) had already been suffering steady losses in the months prior. Thus, even a week before FCF’s announced liquidation, the low quintile was trading at a steep discount compared with the other groups. 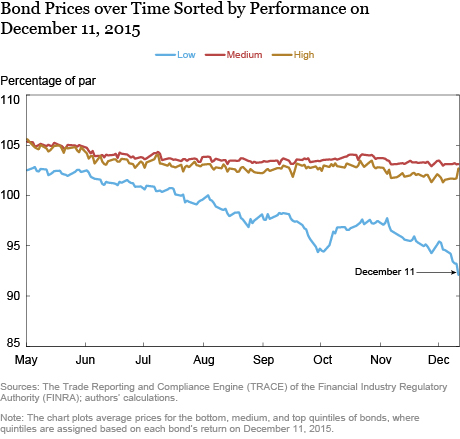 Low- and high-return groups on December 11 were less liquid

Perhaps unsurprisingly, the bonds in the low- and high-return quintiles for December 11 had higher price impact measures prior to the event and on December 11. The next chart shows average Amihud (2002) price impact coefficients for each bond group; these coefficients measure how returns change for a given unit of dollar volume. Thus, a higher price impact measure suggests that prices in the low- and high-return group move more per given unit of order flow, as proxied by the dollar volume measure. On the actual event day, the high-return group experienced the largest increase in price impact, while the medium-return group, whose prices responded the least to the Third Avenue event, showed the smallest increase in price impact. Note that none of these changes were large by recent standards. 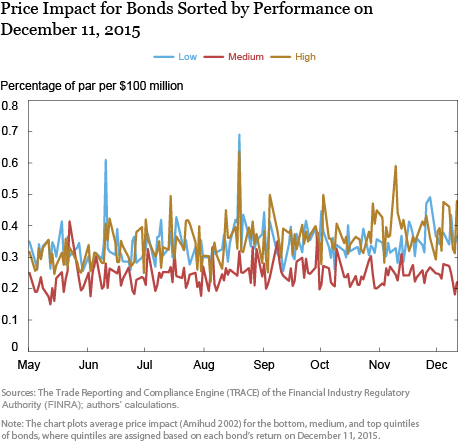 Bid-ask spread and round-trip cost (Dick-Nielsen, Feldhutter, and Lando 2012) capture the cost of buying and selling the same bond in quick succession. The next chart shows that bid-ask spreads and round-trip costs were highest for the low- and high-return groups even prior to the event window. This is consistent with the observation that the bonds with the largest price reactions to news about Third Avenue were already less liquid. On the event day, bid-ask spreads and round-trip costs increased most for these two return groups, suggesting liquidity strains in both groups. The medium group, which had historically better liquidity, did not experience liquidity deterioration on December 11. 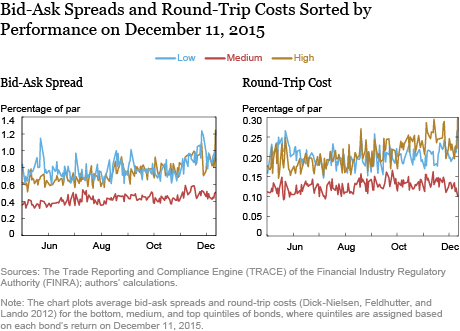 The Validity of Price-Based Liquidity Measures

While our analysis focuses on price-based measures of liquidity (such as bid-ask spread and round-trip cost), market illiquidity is also often described in terms of the time needed to sell a large quantity of a given security. The price-based liquidity measures do not capture that temporal element—that is, the need to delay selling until a buyer can be found. That said, the sudden shock of FCF’s liquidation dramatically increased the need for immediacy. Whereas during normal times investors may have the luxury of waiting for another buyer at a suitable price, sudden changes in the pricing of risk often force investors to pay a premium for a more timely trade. Thus, during risk events like FCF’s liquidation, price-based liquidity measures can provide a reasonable view of trading conditions at the time of the shock.

Third Avenue’s announced liquidation of its Focused Credit Fund on December 9, 2015, was viewed as a risk event in the corporate bond market. We outline theories as to why such risk events could have broader implications for overall market liquidity. Empirically, we find that liquidity was most affected in bonds that were most sensitive to news about Third Avenue, but that those bonds were less liquid to begin with. However, in terms of magnitudes, the liquidity reactions were not particularly large compared with recent variation.

Zachary Wojtowicz is a research analyst at the Bank’s Research and Statistics Group.