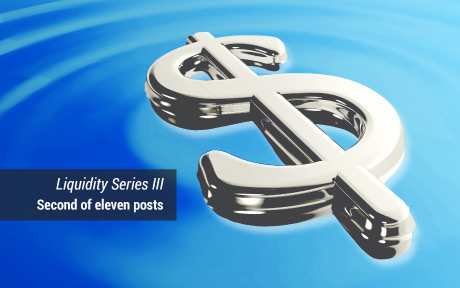 Mortgage-backed securities guaranteed by the government-backed entities Fannie Mae, Freddie Mac, and Ginnie Mae, or so-called “agency MBS,” are the primary funding source for U.S. residential housing. A significant deterioration in the liquidity of the MBS market could lead investors to demand a premium for transacting in this important market, ultimately raising borrowing costs for U.S. homeowners. This post looks for evidence of changes in agency MBS market liquidity, complementing similar posts studying liquidity in U.S. Treasury and corporate bond markets.

Background on the MBS Market
A unique feature of MBS trading is the existence of a forward market known as the to-be-announced (TBA) market. In a TBA trade, the counterparties do not specify which particular securities—or MBS pools—will be delivered to the buyer on settlement day but instead agree on a few basic characteristics of the securities to be delivered—including the coupon rate, issuer, term, and face value. Thus, while the agency MBS market comprises over one million heterogeneous MBS pools, more than 90 percent of trading is concentrated in only a small number of liquid forward contracts.

The concentration of trading allows for a highly liquid market for hedging new mortgage production and existing mortgage positions, for pricing new mortgages, and for speculating on the course of interest rates. As a result, trading volume in agency MBS has historically been much higher than that of corporate bonds. Over the course of 2015, agency MBS trading volume averaged approximately $190 billion a day, compared with $27 billion a day for corporates—this despite the fact that the $8.2 trillion corporate debt market is notably larger than the $6.2 trillion agency mortgage market (all statistics are from the Securities Industry and Financial Markets Association [SIFMA]).

Another consideration when assessing mortgage market liquidity is the pattern of issuance. The gross issuance of agency MBS fluctuates substantially, primarily with the level of long-term interest rates, a main determinant of mortgage refinancing. Following the 2013 taper tantrum, for example, when long-term interest rates rose sharply, issuance plunged, as shown in the chart below. 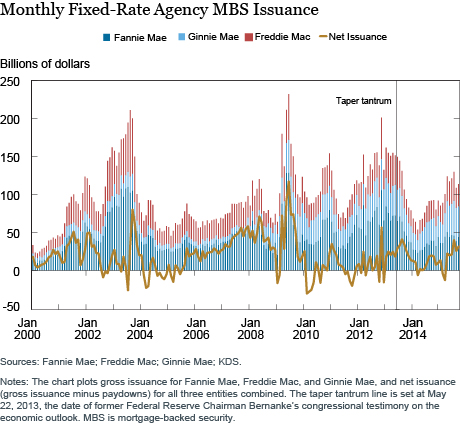 Trading Volume Has Declined Even though Number of Trades Is Stable
Our liquidity metrics are based on Trade Reporting and Compliance Engine (TRACE) data from the Financial Industry Regulatory Authority (FINRA). TRACE began collecting MBS data in May 2011 and thus does not allow us to look at earlier periods. Overall, the number of trades in the agency MBS market has shown little trend since 2011, as seen in the chart below. Note that the proportion of trades that occur between dealers and customers (as opposed to between dealers) has increased.

By contrast, average trade size has decreased. Specifically, the average size of trades declined over the second half of 2013 following the taper tantrum and has remained lower since. As a result, total trading volume (the number of trades multiplied by their average size) has declined as well, as shown in the following chart.

Additionally, the turnover rate (trading volume as a percentage of total agency MBS outstanding), which attempts to control for changes in trading volume that are attributable to the change in the size of the agency MBS market, also declined over the second half of 2013, before stabilizing. 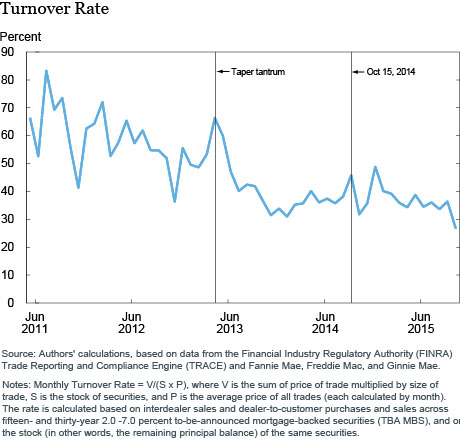 Transaction Cost Measures Largely Stable
While the decrease in average trade size, trading volume, and turnover could suggest a decline in liquidity, measures of transaction costs show a mixed picture. The bid-ask spread, calculated here as the difference between daily average sell and buy prices for a security, spiked in the second half of 2013 but soon declined, and it has been relatively stable since. The same pattern is reflected in indicative bid-ask spread levels reported by Tradeweb, a trading platform widely used by agency MBS traders in the dealer-to-customer market. 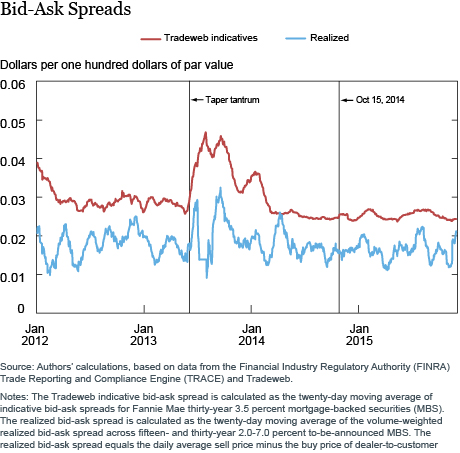 Similarly, a measure of the price impact of trades (how much prices change for a given size trade), developed by Amihud (2002), suggests that liquidity deteriorated in 2013 but has since largely recovered. Moreover, there is little evidence that the turmoil in the Treasury market on October 15, 2014, had any lasting impact on MBS liquidity. Conclusion
Some measures of agency MBS trading activity, such as trade size, trading volume, and the turnover rate, indicate a decline in market liquidity. Analysts attribute this trend to myriad factors, including increased regulation, which has made it more costly for financial institutions to take on risk; a rise in agency MBS ownership among buy-and-hold investors; and a decline in issuance. However, measures of transaction costs and price impact suggest that liquidity conditions have been relatively stable since 2011. It will be interesting to monitor liquidity conditions in this market as monetary policy is normalized, especially given the planned introduction of a single security designed to improve liquidity.

Rich Podjasek is an associate in the Federal Reserve Bank of New York’s Markets Group.

Linsey Molloy is a senior associate in the Markets Group.

Andreas Fuster is a research officer in the Research and Statistics Group.

Posted by Blog Author at 07:02:00 AM in Financial Markets, Housing, Liquidity