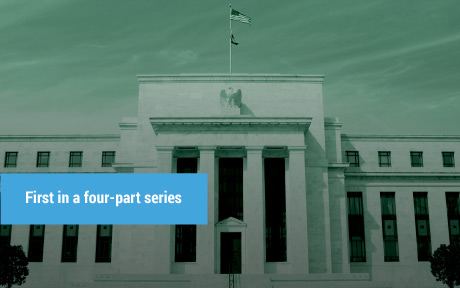 The main source for this post is a paper from the Bank for International Settlements (BIS) on Monetary Policy Frameworks and Central Bank Market Operations, which gives an overview of Basel Committee-member central banks’ frameworks. We are interested in these global frameworks because they offer a broad view of what constitutes the standard elements necessary for monetary policy implementation. However, we do not attempt to draw specific implications from the choices of individual central banks. (Our discussion relies on a basic understanding of central bank activity. For a good primer on monetary policy implementation in the Federal Reserve System, please see “Monetary Policy 101: A Primer on the Fed’s Changing Approach to Policy Implementation” [Ihrig, Meade, and Weinbach 2015].)

In this first post, we focus on the more standard elements of a monetary policy implementation framework, the central bank’s target rate, and the tools that central banks have to achieve their targets (specifically the central bank facilities and operations), as well as policies that influence the supply and the demand for reserves.

In the next three posts, we will discuss elements of an implementation framework that have not been studied as much. In some cases, these elements changed a lot during the crisis. Our post tomorrow will consider the type of counterparties that can borrow from or lend to a central bank and the collateral against which these counterparties can receive a loan from a central bank. The other two posts, which will run Wednesday and Thursday, will discuss the composition and structure of central banks’ balance sheets before and after the crisis.

What are the target rates?

Many central banks specify a market interest rate that they target. A large majority of central banks target an overnight market rate, but these rates can come in many flavors. Some central banks, such as the Bank of Canada, target an interest rate on secured loans, meaning that the loans considered are backed by collateral. Others, such as the Federal Reserve, target an unsecured rate. Some central banks specify that they use a rate on interbank loans, while others are not specific about which financial institutions are counterparties in the market that determines their target.

While targeting an overnight rate is very common, it is far from the only choice. Before the crisis, the Swiss National Bank targeted a three-month interest rate—the three-month Libor. In Norway, the central bank targets a “short” rate without being explicit about the specific term. A benefit of longer-term rates is that they can affect the real economy more directly, as argued in this article in our Current Issues series. That said, longer-term rates are more difficult for the central bank to control.

Other central banks, like the European Central Bank (ECB), do not specify an interest rate target. As of 2009, the Reserve Bank of India had no formal rate target and had as a goal of its operations to reduce market volatility. The central bank in Hong Kong, a small open economy, uses the spot exchange rate as its target rate. With its policy of quantitative and qualitative monetary easing, the Bank of Japan targets the monetary base.

These differences reflect variations among central bank mandates and objectives, as well as the level of development of the financial markets in which the central banks operate.

How do central banks work to achieve their targets?

Central banks implement their interest rate targets by influencing the cost of borrowing reserves held at the central bank. There are two basic approaches. One way is to make reserves sufficiently scarce. Basic supply and demand logic implies that the cost of borrowing reserves increases with scarcity. The other way is to rely on arbitrage. If a central bank pays an interest rate on its reserves, banks should be unwilling to lend these holdings at a rate that is lower than what they could earn from the central bank.

If the central bank knows the demand for reserves, it can set the supply of reserves to intersect the demand at the desired interest rate, as explained in this Liberty Street Economics post on “Corridors and Floors in Monetary Policy.” Market operations are typically used to adjust the supply of reserves. All of the central banks described in the BIS document use some form of market operations, usually short-term repurchase agreements, as their main form of market operation.

Until the financial crisis, the Bank of England had a system where banks could choose voluntary targets for the reserves they hold over the maintenance period. That meant that banks would not face any opportunity cost as long as they held reserves within a given range around their target.

In systems that rely on scarcity, holding too few reserves has a cost because there are penalties for not meeting the requirement; conversely, holding excess reserves has an opportunity cost since they earn a low return. Hence, banks have an incentive to hold exactly the amount of reserves they need, but not more. This structure promotes trading in money markets as banks try to manage their reserves.

Before the crisis, a small number of central banks relied on arbitrage to implement monetary policy, among them the Reserve Bank of New Zealand and Norges Bank. These central banks supplied a relatively large quantity of reserves, even before the crisis, so they could not rely on scarcity. Instead, these central banks set the interest rate on their deposit facility at, or very close to, their policy rate. This rate acted as a “floor” for their target rate. Since the financial crisis, other central banks have increased reserves substantially through asset purchase programs (for example, the Bank of England, the Bank of Japan, the ECB, the Federal Reserve, and the Riksbank), such that these central banks now rely on arbitrage to steer their target rates.

Central banks relying on arbitrage don’t need to manage the level of reserves very closely and may not need to conduct market operations. Indeed, under these frameworks, even large fluctuations in the level of reserves should not affect money market rates very much and banks are roughly indifferent about the amount of reserves they hold. Holding large reserves can also reduce incentives for banks to trade in interbank markets, with a number of countries that increased the supply of reserves during the crisis experiencing a decrease in interbank market activity.

There is a wide variety in the tools used by central banks to conduct monetary policy. In our next three posts, we will explore other dimensions in which these differences manifest themselves.