« Monetary Policy Transmission before and after the Crisis | Main | How Have High Reserves and New Policy Tools Reshaped the Fed Funds Market? »

A Conversation with Ken Garbade 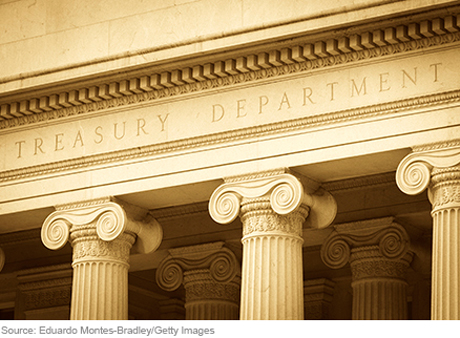 Few people know the Treasury market from as many angles as Ken Garbade, a senior vice president in the Money and Payments Studies area of the New York Fed’s Research Group. Ken taught financial markets at NYU’s graduate school of business for many years before heading to Wall Street to assume a position in the research department of the primary dealer division of Bankers Trust Company. At Bankers, Ken conducted relative-value research on the Treasury market, assessing how return varies relative to risk for particular Treasury securities. For a time, he also traded single-payment Treasury obligations known as STRIPS—although not especially successfully, he notes.

As an economist at the Fed, Ken has sought to combine his academic and practical backgrounds by researching and writing about the history of the Treasury market. His book Birth of a Market: The U.S. Treasury Securities Market from the Great War to the Great Depression was published by MIT Press in 2012; his latest work, Treasury Debt Management under the Rubric of Regular and Predictable Issuance, was released by the Bank last fall.

Publications editor Valerie LaPorte spoke with Ken about his interest in the Treasury market and his new book.

Q: To many people, the Treasury market seems obscure. What makes it so worthy of study?
A: The Treasury market provides the U.S. government with its principal means of funding federal budget deficits. It’s also an important source of liquidity for investors who generally need to invest over predictable intervals but whose needs may change before their investments mature. And, of course, it's the principal locus of Federal Reserve open market operations.

Q: Your new book looks at the evolution of a particular Treasury practice—the issuance of securities in predictable amounts at regular intervals. Those who follow Treasury auctions might assume that Treasury securities were always issued in this way. But as you show in your book, this was not always the case.
A: That’s right. The Treasury initiated regular auction offerings with weekly 13-week bill auctions in 1937, and moved to regular auctions of 26-week and 1-year bills in the late 1950s. However, until the 1970s, it issued notes and bonds—its longer-term obligations—through fixed-price subscription offerings on an “as needed” basis. The Treasury scheduled the offerings to meet its funding requirements but offered maturities that investors were interested in buying at the time.

Q: What drove the Treasury to adopt regular and predictable issuance of notes and bonds in the 1970s?
A: The lack of predictability left many intermediate- and long-term investors with little incentive to accumulate funds in anticipation of an offering at a desirable maturity—who knew when it might come to market? The uncertainty also placed a significant underwriting burden on primary dealers.

When interest rates became more volatile in the early 1970s—and as the size of the federal deficit and the frequency and size of Treasury offerings began to grow—Under Secretary of the Treasury Paul Volcker, who would later become the president of our Bank and then chairman of the Board of Governors, realized that it would be less costly to issue notes, and later bonds, on a regular and predictable basis and to auction those securities as it auctioned bills. Regularity meant that investors could plan ahead; auctions reduced the risk that an offering would fail to attract adequate interest.

Q: If the Treasury had many years of experience auctioning bills on a regular and predictable basis, why did it take so long to extend the practice to notes and bonds?
A: My best guess, and it's only a guess, is that change and innovation are uncomfortable in the absence of a demonstrated need. The changed conditions of the 1970s produced the requisite need. The fresh outlook of a new Treasury under secretary undoubtedly helped as well.

Q: Have circumstances required the Treasury to depart from this practice at times? What were the consequences?
A: The Treasury departed from the practice twice—in the sale of foreign-targeted notes in the mid-1980s, and in the sale of bills for the Supplementary Financing Program following the onset of the financial crisis in 2008. In the first case, Treasury officials thought they could get cheaper funds by issuing opportunistically; in the second, officials had to respond to the exigencies of the crisis. The foreign-targeted program was a failure and was canceled after four offerings. SFP issuance proved more lasting, but was converted to a regular and predictable schedule in 2009 as funding requirements stabilized, and later eliminated when the funds were no longer needed.

Q: Given that Treasury financing needs rise and fall with the business cycle, how has the Treasury been able to maintain its reputation for regular and predictable issuance?
A: The historical record suggests that Treasury has maintained its enviable reputation as a regular and predictable issuer by limiting revisions of offering schedules and amounts to those times when fluctuations in federal financing requirements clearly demand a change, and to revisions that clearly reduce aggregate funding costs without substantively altering investment opportunities. An example of the second type of change is the Treasury’s 1986 decision to cancel the 20-year bond series and to replace it with expanded offerings of 10-year notes and 30-year bonds that nicely bracketed the terminated series.

Q: The musical “Hamilton,” which focuses on the first U.S. Treasury secretary, may be generating new popular interest in this area of the government. What first interested you about the workings of the Treasury?
A: The New York Fed has long-standing and extraordinarily deep ties to the Treasury market, as Treasury’s agent in primary market sales and in its role managing open market operations for the other Reserve Banks and the Federal Open Market Committee. There were gaps in our understanding of the evolution of the market that I was quite happy to fill. My research has taken me to the Treasury’s own archives, to contemporary news accounts, and to the reports and meeting minutes of the Treasury Borrowing Advisory Committee. I’ve found it gratifying to help document and preserve a rich administrative legacy that has so benefited the country in war and peace.

“How the Nation Resolved its First Debt Ceiling Crisis,” March 4, 2013

Kenneth D. Garbade is a senior vice president in the Federal Reserve Bank of New York's Research and Statistics Group.