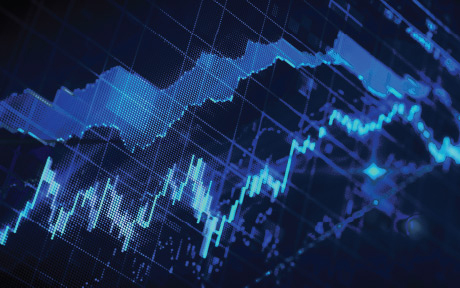 The Federal Open Market Committee implements monetary policy by raising or lowering its target for the federal funds rate, the interest rate banks charge each other for overnight loans. Because the Federal Reserve has no direct control over most interest rates, it relies on arbitrage in money markets for the change in the fed funds rate to be transmitted to other short-term rates, thus causing all short-term rates to move in tandem. This transmission to other rates is an important first step for the Fed’s actions to influence the real economy. In this post, we describe the major developments that have affected monetary policy transmission since the recent financial crisis. We conclude that while arbitrage may have been impeded at the beginning of the crisis, it currently remains effective in transmitting changes in monetary policy via the money markets.

Before the financial crisis, bank reserves were relatively scarce—that is, the amount of reserves in the banking system was close to the amount that banks were required to hold. Further, since banks received no interest on the reserves held at the Fed, they tried to minimize their holdings. Instead, if they needed reserves (for example, to meet a payment), banks would borrow them in the fed funds market. The New York Fed’s trading desk adjusted the total supply of reserves in the banking system to keep the market or “effective” rate of the fed funds close to the target rate. Since some of the banks that traded in the fed funds market were also active in other money markets, they had incentives to keep rates aligned through arbitrage. 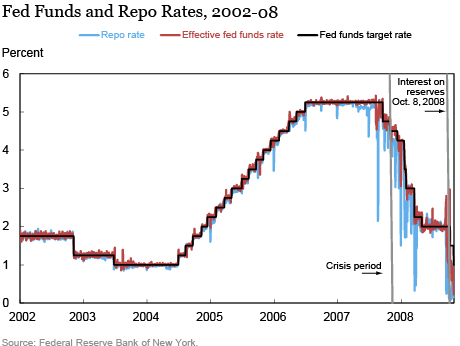 The Fed implemented extraordinary measures during the crisis to ensure the soundness of the financial system and to stimulate the economy. In particular, the Fed provided liquidity assistance to financial institutions and implemented the large-scale asset purchase (LSAP) program. These programs entailed a substantial increase in reserves as liabilities to back up these assets. Since the quantity of reserves was well above required reserves, banks no longer faced a strong trade-off between holding reserves and selling them in the fed funds market. To maintain an incentive for banks to hold reserves, the Fed paid interest on reserves (IOR) from October 2008 onwards. This was meant to create a “floor” for the fed funds rate since no bank should be willing to lend reserves at a rate below the IOR rate.

The Fed also repeatedly reduced the fed funds target rate until it reached a range of 0 to 25 basis points (the zero lower bound or ZLB) in December 2008. It remained in this range until “liftoff” in December 2015, when the Fed increased the target range for the first time since the crisis.

Also during the post-crisis period, the repo rate frequently exceeded the fed funds rate even though repo borrowing is secured while fed funds are not. This could be indicative of frictions in money markets, and could also be related to a Fed program that increased the demand for repo financing. 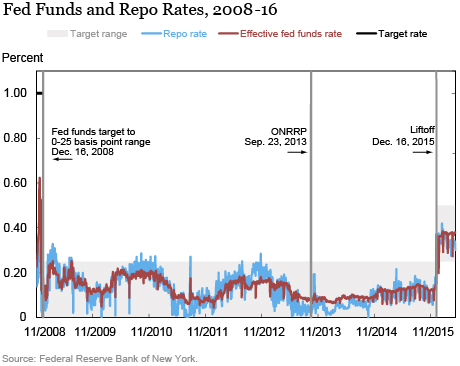 In order to set a harder floor for short-term rates and to improve arbitrage between money markets, the Fed began testing a new tool in September 2013, the overnight reverse repurchase agreement (ONRRP) facility, where eligible counterparties provide overnight loans to the Fed secured by collateral from the Fed’s securities portfolio. This new facility is open to a broad set of financial counterparties (including nonbank entities such as mutual funds) and therefore has not suffered from the same segmentation issues as IOR.

For monetary policy transmission to be effective, information about fed funds rate changes should be quickly conveyed to other money market rates (such as for repo borrowing). This section investigates whether that is the case, despite the many changes to the money markets since the crisis.

To compare the dynamics of fed funds and repo rates before and after major developments in money markets, we consider their movements relative to the target rate. Since there were several target rate changes in the pre-crisis period but none during the ZLB period, we measure rates as deviations from the target rate in order to make the rate dynamics more comparable. We exclude from our analysis the crisis period of 2007-08 due to the extreme market stress at this time as well as the period from November 2015 onward since the markets were already anticipating “liftoff.” We analyze the following periods: the pre-crisis (2002-06) and the ZLB periods (January 2009-October 2015) with the latter divided into pre-ONRRP (January 2009-August 2013) and post-ONRRP (September 2013-October 2015) periods.

On average, the fed funds and repo rates remained within the target range even during the ZLB period (see the left panel in the chart below). However, this is not necessarily evidence of effective monetary policy transmission but instead might reflect natural features of the financial system that prevent nominal interest rates from becoming negative. There also appears to be a reduction in the absolute spread between the fed funds rate and the repo rate in the post-crisis period, a fact which seems counterintuitive since the higher credit risk in the post-crisis period would be expected to result in higher spreads between the secured and unsecured rates. The right panel below reveals a dramatic reduction in volatility of rates, particularly the repo rate, after the introduction of the ONRRP program. 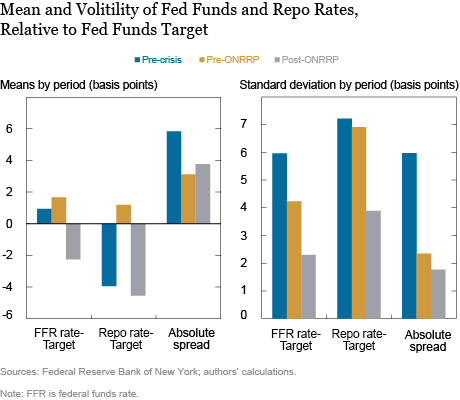 Despite substantive changes in the monetary policy framework and in money market conditions since the financial crisis, arbitrage currently appears to be effective in transmitting changes in monetary policy from the fed funds market to other money markets. While arbitrage may have been hampered initially during the ZLB period, it seems to have revived after the ONRRP facility was introduced. One explanation for the revival of arbitrage may be the ability of the ONRRP facility to reduce uncertainty in rates by setting a harder floor for short-term interest rates. Thus, the continued operation of this new facility appears to be important for efficient money market functioning and monetary policy transmission.

Alexander Kroeger is a senior research analyst in the Federal Reserve Bank of New York’s Research and Statistics Group.