« U.S. Real Wage Growth: Fast Out of the Starting Blocks | Main | From the Vault: Does Forward Guidance Work? » 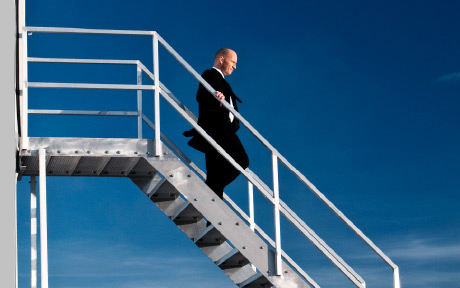 As discussed in our recent post, real wages, holding constant any cyclical effects, show positive growth that is concentrated early in a worker’s career. By age 40, real wage growth has typically declined to around zero. The following chart, reproduced from Monday’s post, depicts this pattern for the five cohorts of white males born in the 1950s by different education levels. 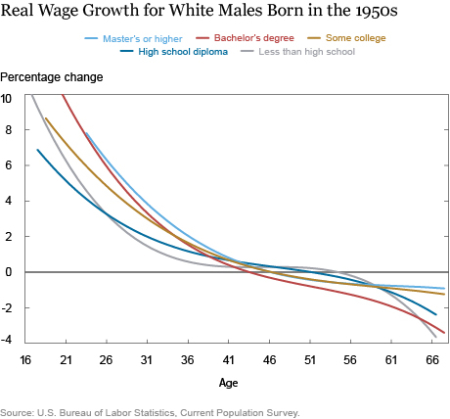 In Monday’s post, we explained how our methodology for estimating the 140 cohort-specific real wage profiles controls for cyclical factors relating to tight or slack labor markets. Consequently, the real wage growth rates for the five cohorts shown above should be interpreted as what workers in those cohorts would expect to experience on average at each age in a neutral labor market. 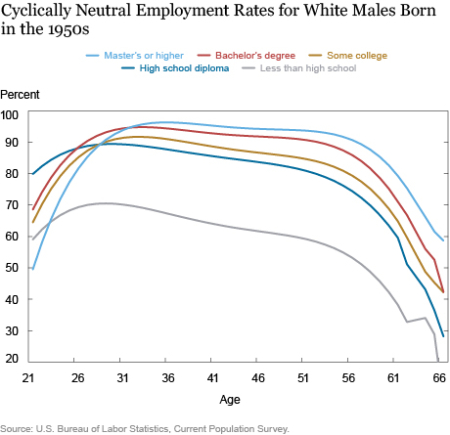 We now have the necessary pieces to construct the cyclically neutral aggregate average real wage growth series, with our estimate based on the following procedure. For each year and month, we use our sample of individuals from the Current Population Survey (CPS) described in Monday’s post. For each individual, we use his/her cohort and age to identify an expected employment rate and an expected real wage growth rate. Since the CPS is a random sample, each worker is assigned a sample weight reflecting how many people in the population that individual represents. We combine these three elements by multiplying the individual’s employment rate, real wage growth rate, and sample weight.

For illustrative purposes, consider an individual from the CPS who according to the sample weight represents 100,000 people in the U.S. population. Regardless of this individual’s actual employment status at the time of the survey, we assign a predicted employment rate to the individual based on his/her cohort and age. If we assume this employment rate is 0.6, then this person would represent 60,000 employed individuals in a neutral labor market. Next, we assign the predicted real wage growth rate based on this person’s cohort and age to each of these 60,000 individuals. Averaging across all individuals in the CPS survey for that month gives us the expected economy-wide real wage growth rate associated with a neutral labor market at that point in time. We then repeat this exercise for each year/month in our estimation period. 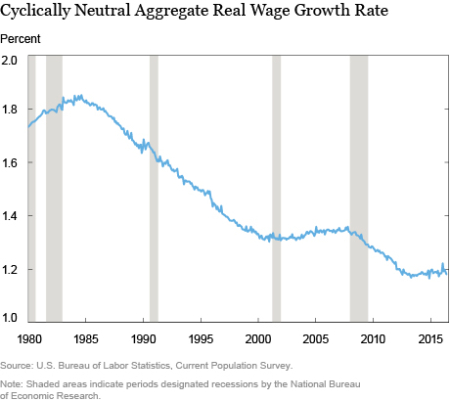 The analysis also suggests that the pace of the decline has not been uniform over the three decades with the average leveling out in the 2000s. Readers should keep in mind that this measure is an average of individual real wage growth rates, which is not the same as the growth rate of an index tracking an average real wage. Thus, the aggregate average real wage growth series we derive is not directly comparable to growth rates in real compensation per hour, average hourly earnings, or the employment cost index.

Ellen Fu is a former senior research analyst in the Bank’s Research and Statistics Group.

In reply to TK: Thank you for your comment. We capture this demographic trend by allowing education completion to be one of the characteristics of our cohorts. As we show in the first chart of Monday’s post, more education raises the life-cycle real wage profiles of workers—that is, the level of the series. However, as shown in the second chart of Monday’s post, the implied life-cycle real wage growth rates are more similar by education. Thus, over time as higher percentages of the population have college degrees or more in education, this would be expected to raise the aggregate real wage level, but would have less of an effect on aggregate real wage growth.

Certainly, due to demographic shift the overall wage growth is expected to be on downward trend. I was wondering how would you incorporate impact from increasing percent of population with higher education. As more percent of employed population moves from high-school or lower education cohort to college education cohort, this must boost the overall wage increase. Do you think this shift helps in opposite impact of demographic shift or the pace at which population is moving into college degree is just too slow to have some meaningful impact.