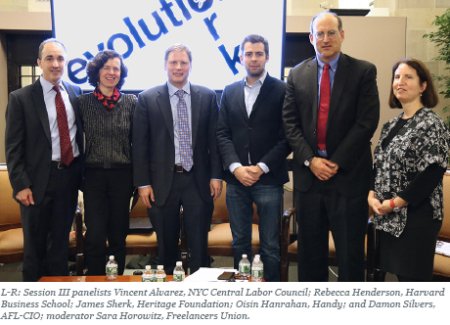 Sara Horowitz, founder and executive director of the Freelancers Union, opened the event by describing the transformations taking place in the nature of work. Pointing to the rapid growth of the independent workforce, she emphasized the importance of ensuring that the necessary support systems are in place for these workers.

In his remarks, New York Fed President William C. Dudley spoke of the Federal Reserve’s commitment to monitoring the evolution of the workplace, linking it to the System’s mandate to pursue maximum sustainable employment. Dudley underscored the need to understand how this evolution may affect job security and earnings stability, and suggested that workforce development strategies be realigned to help workers acquire the skills necessary to adapt to the changes now under way.

Randi Weingarten, president of the American Federation of Teachers, focused her remarks on the structure of benefits for contingent workers, including healthcare and pensions. Weingarten highlighted the importance of working across the political spectrum and with a diverse set of stakeholders. She concluded by asking all participants to consider “what we can do together to ensure contingent workers have stability in their lives.”

Morning Panels: Sizing the Gig Economy and the Impact of Technology

The first panel focused on defining and sizing the “gig” economy. How large is the workforce that operates under alternative work arrangements? How do we measure and track the participation of these workers in the labor force, and what is their impact on the economy? Experts outlined various work arrangements that depart from the single-employer, nine-to-five model, including short-term independent work arrangements and those enabled by platform technologies. The participants agreed that measurement and obtaining data are a priority.

The second panel explored the impact of emerging technologies on the future of work. The panelists discussed models of education and skill development that are necessary to compete in today’s job market. The discussion also covered the investment community’s perspective on providing capital for innovation.

Federal Reserve Governor Lael Brainard delivered remarks over lunch on the gig economy and the growth of contingent work. Brainard remarked that “understanding the changing nature of employment in today’s economy is not only central to the mission of the Federal Reserve, but also goes to the core of who we are as providers for our families and productive members of society.” After exploring some of the potential implications of these changes, she noted that policymakers will need to address both the positive and negative effects of the growth of gig work on household welfare by seeking “to maximize the benefits of the greater flexibility and lower entry barriers provided by advances in technology, while addressing the risks that currently accompany many forms of gig employment.”

After lunch, a panel consisting of representatives from industry, labor, and academia identified the most pressing issues facing the American worker. Chief among these issues was how the shifting power structure of the employer-employee relationship may be affecting the workforce. Panelists also evaluated the merits of the current regulatory and legal landscape. The concluding panel provided insight into how practitioners might rethink workforce and community development strategies in light of how work is evolving. Each panelist outlined different models for engagement, and some research was shared on the demographics of gig workers.

Senator Mark R. Warner concluded the conference by underscoring the importance of coming together across sectors to discuss emerging issues in the gig economy. Importantly, he reiterated that improved access to data on the evolving workforce is a key priority as we continue to understand the changing landscape of work in the United States.

Nora Fitzpatrick is an assistant vice president in the Federal Reserve Bank of New York’s Communications and Outreach Group.

Anika Pratt is an assistant vice president in the Bank’s Communications and Outreach Group.

Aysegul Sahin is a vice president in the Bank’s Research and Statistics Group.