Historical Echoes: Are There Any Banks on Bank Street? 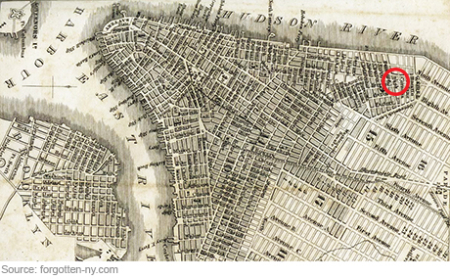 Bank Street in New York City is a quaint little six-block stretch in Greenwich Village (see this 48-second video) with a huge cultural legacy—but no banks. Many cities and towns have a Bank Street and often the street is so named because that’s where most of the banks were originally located. (It is not likely that any Bank Street got its name because of its proximity to a riverbank.) However, New York City’s Bank Street is not where the banks were originally located and it’s not even in the financial district—it’s in Greenwich Village. Why, then, is it called “Bank Street?”

Okay, we cheated in that last paragraph. Manhattan’s banks were not on Bank Street originally but they were indeed there at some point—they moved northward from Wall Street in the late eighteenth and early nineteenth centuries in an effort to escape yellow fever. A post on the Forgotten New York website explains how there were two main waves of the epidemic in the city and that Bank Street was essentially named for the first bank to relocate, not the set of banks that eventually moved there:

Though most neighboring streets are named for local personalities in the Village’s early days (one early burgess, Charles Christopher Amos, had three streets named for him), Bank Street is named for one of the oldest institutions in NYC, the Bank of New York, which opened an office “uptown” after a yellow fever epidemic downtown on Wall Street in 1798 prompted a relocation. Several other banks followed suit in 1822 after a second outbreak.

One can view this relocation of banks as an early form of corporate contingency (or business continuity) planning. Think about how important continuity is in banking and how advantageous it would have been to keep those early New York banks functioning. In his 1922 book A Century of Banking in New York, 1822-1922, author Henry Lanier describes, in the chapter “The Year the Banks Migrated,” the Bank of New York’s forethought:

Some bankers and others had been more foresighted. As noted, one of the first deaths in the scourge of 1798 was a book-keeper in the Bank of New York. “Fearing another visitation of the pestilence, the bank made arrangements with the branch Bank of the United States to purchase two plots of eight city lots each, in Greenwich Village, far away from the city proper, to which they could remove in case of being placed in danger of quarantine. Here two houses were erected in the spring of 1799, and here the banks were removed in September of that year, giving their name, Bank Street, to the little village lane that had been nameless before. The last removal was made in 1822, when the yellow fever raged with unusual virulence, and the plot which had been purchased for $500 was sold in 1843 for $30,000.”

In this 1842 map of lower Manhattan, you can see Bank Street just to the right of the large “E” of the “Hudson River” label. (Here is a 1933 street view.) Of course, Wall Street is in the bottom tip of the island. Bank Street is about 2.7 miles north of Wall Street. Yes, it takes a bit of time to walk from one to the other—but not that long. How did they know that this distance would be sufficient to prevent the fever’s spread? They didn’t know with scientific certainty, but they had an idea (see below), and the move was indeed sufficient. Scientists at the time were ignorant of the mechanism of transmission—the mosquito. That discovery and proof thereof did not come until 1900 (see video from PBS’s American Experience series, which describes the horror of this disease and how three medical scientists discovered the virus’s means of transmission). Mosquitoes don’t travel very far by themselves (most don’t travel more than a mile from where they hatched), so for yellow fever to have spread to Bank Street, someone would have had to transport an infected mosquito and let it loose among people on Bank Street, or an infected person would have had to hang around in the Bank Street neighborhood long enough to be bitten by a mosquito, of which there were possibly a lot fewer in the Village. The question of why mosquitos could not have been blown by the wind from one location to the other is posed by Henry Lanier in the same book mentioned above. (Lanier also somewhat answers the question about why people thought the move north would be sufficient):

Now, it happened that there was at the city’s very door a safe refuge. From the time of the “epidemical distemper or plague” reported by Mayor John Cruger in 1742, New Yorkers had discovered they could escape the infection by fleeing to the village of Greenwich, only two or three miles away. This haven was considered almost proof even against smallpox . . .

Certainly, odd as it seems, there is no record that yellow fever ever “crossed the swamp and the meadows between the town and the village.” (Though it’s hard to guess why not, since the stegomyia mosquito, whom we now know to be the assassin that spreads yellow fever, could hardly fail to have been blown that far when the winds were right.)

Perhaps Lanier was mistaken in his belief that the wind should have been able to blow mosquitoes to Bank Street. Or maybe he was right and the Bank Streeters just got lucky.

Although yellow fever was an ongoing problem primarily in the southern region of the United States, it had a big impact on New York. The Centers for Disease Control and Prevention has a map of the geographical range of the mosquito species that spread yellow fever (Aedes aegypti)—the same species that is responsible for the spread of the Zika virus. New York City is within that range now (and must have been then).