« Hey, Economist! Tobias Adrian Reflects on His Work at the N.Y. Fed before Heading to the IMF | Main | Credit Market Arbitrage and Regulatory Leverage » 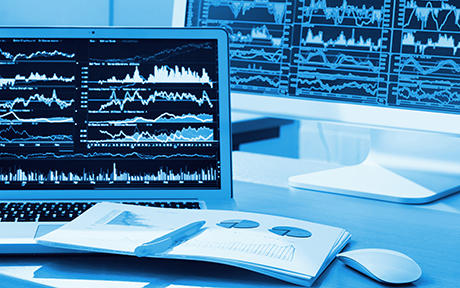 Corporate bonds are an important source of funding for public corporations in the United States. When these bonds cannot be easily traded in secondary markets or when investors cannot easily hedge their bond positions in derivatives markets, the issuance costs to corporations increase, leading to higher overall funding costs. In this post, we examine recent trends in arbitrage-based measures of liquidity in corporate bond and credit default swap (CDS) markets and evaluate potential explanations for the deterioration in these measures that occurred between the middle of 2015 and early 2016.

In the first trade we consider, the CDS-cash bond “arbitrage trade,” an investor buys a corporate bond and simultaneously buys CDS protection on the bond (or vice versa on both legs of the trade). The CDS-bond basis is the difference between the CDS spread and the implied spread on the bond. “Arbitrage” refers to the fact that the spread of the bond should equal the CDS spread for the same firm if they represent only the firm’s default risk. In practice, the basis is generally not zero. One interpretation of this basis is that it measures the liquidity of the cash bond market relative to the CDS market; when one market is more liquid than the other, investors will accept a lower spread as compensation for the greater liquidity.

The chart below plots the CDS-bond basis for investment-grade (left panel) and high-yield (right panel) bond indexes since January 2005. The CDS-bond basis has been increasing since January 2015 for investment-grade bonds and since the middle of 2015 for high-yield bonds, suggesting that liquidity of the cash bond market has been deteriorating relative to the CDS market. 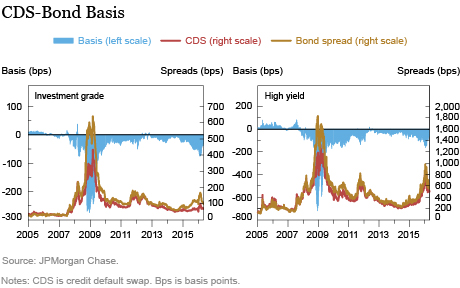 In the second trade we consider, the CDX-CDS arbitrage trade, an investor buys protection on a CDX index and sells protection on the portfolio of single-name CDS contracts that replicates the index (or vice versa). The resulting CDX-CDS basis equals the absolute value of the difference between the CDX index spread and the weighted average spread paid on the replicating portfolio of single-name CDS. Recent academic research has argued that the CDX-CDS basis measures the overall liquidity of the CDS market, with changes to the basis accounting for 30 percent of CDS returns on average. The next chart plots the quoted spread, the single-name implied spread, and the CDX-CDS basis for the North American investment-grade (left panel) and North American high-yield (right panel) on-the-run CDX indexes. Similar to the CDS-bond basis, the CDX-CDS basis has been increasing since the beginning of 2015, suggesting that while liquidity of the CDS market has improved relative to the cash bond market, it has deteriorated relative to the CDX market. In February 2016, the CDX-CDS basis reached peaks not seen since the financial crisis, reaching a third of the financial crisis peak. 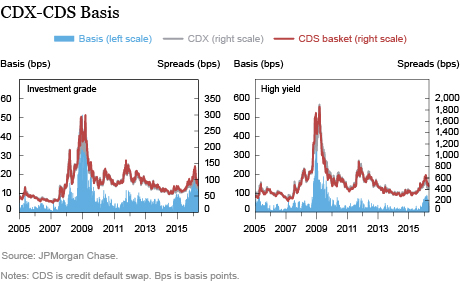 The moves in the credit bases between the second half of 2016 and the first quarter of 2016 were abnormal relative to this historical experience. The table below shows that the one-month change between January and February 2016 in the CDS-bond basis was in the bottom (most negative) fifth percentile of one-month changes observed between January 2005 and April 2016, and the six-month change (between August 2015 and February 2016) was in the bottom tenth to fifteenth percentile of historical changes for the investment-grade and high-yield indexes. For the CDX-CDS basis, both the one-month and the six-month changes are in the highest (largest) fifth percentile of the historical distribution of changes for both the investment-grade and the high-yield indexes. 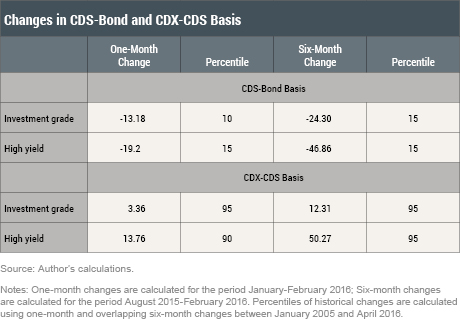 Three possible explanations for these recent changes are greater idiosyncratic risk at the firm level (which makes the CDX index less attractive for hedging), strategic positioning by asset managers, and regulatory constraints, which reduce the attractiveness of arbitrage trades.

Market participants have suggested that investment advisors specializing in corporate credit may have increased their long positions (by selling more protection) in CDX indexes in the second half of 2015 in anticipation of future fund outflows; by selling the more liquid CDS rather than buying the less liquid bonds, investment advisors still take on credit risk exposure while maintaining a relatively liquid portfolio. The chart below shows the net position in the CDX-CDS basis trade in the investment-grade (left panel) and high-yield (right panel) index by type of institution, together with the monthly net inflows into bond funds specializing in investment-grade and high-yield bonds, respectively. Indeed, we see that investment advisors increased their use of derivative products in advance of fund outflows. While this increase was unusual for the high-yield index, investment managers typically have a large sell exposure to the investment-grade index. The strategic substitution away from bonds to CDS further decreases liquidity in the bond market relative to the CDS market, contributing to the widening CDS-bond basis. 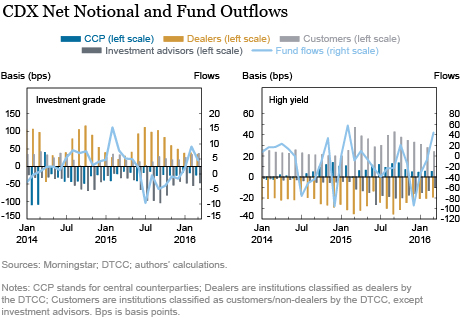 Market participants have also suggested that post-crisis regulatory changes have limited the willingness of regulated institutions to engage in arbitrage trades across a variety of markets, including CDS and interest rate swap markets. Below we plot the two credit bases and the spread between the fixed interest rate paid on interest rate swaps with a ten-year maturity and the yield on the ten-year Treasury security. 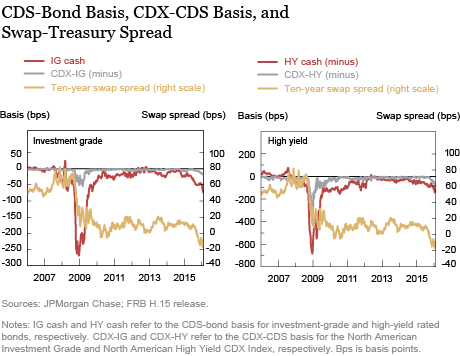 The credit-basis widening does indeed coincide with swap spreads becoming negative in the early part of 2015. Note also that the credit basis and the swap spread are barely correlated before 2015, further suggesting a recent structural change in these markets. We examine the changes in the costs associated with the CDS-bond basis trade in greater detail in a companion post.

Nina, Does this work impact your understanding of the overall liquidity changes in the debt market or equity market? Charles LeMaire