« At the N.Y. Fed: Capital Flows, Policy Dilemmas, and the Future of Global Financial Integration | Main | Trends in Arbitrage-Based Measures of Bond Liquidity »

Hey, Economist! Tobias Adrian Reflects on His Work at the N.Y. Fed before Heading to the IMF 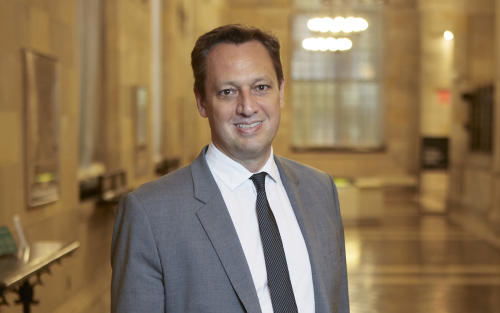 Tobias Adrian is leaving the New York Fed to become the Financial Counselor and Director of the Monetary and Capital Markets Department at the International Monetary Fund (IMF). In announcing Adrian’s appointment, Christine Lagarde, managing director of the IMF, described Tobias as “internationally highly regarded for his insightful analytical work.” Until he starts his new position at the beginning of 2017, Adrian will be winding down his service as Senior Vice President of the New York Fed and Associate Director of the Bank’s Research and Statistics Group. Before he moves on to the IMF, Adrian shared some insight on his time at the Bank.

Q: How did you start working on systemic risk?

I subsequently teamed up with Markus Brunnermeier from Princeton University to propose a systemic risk measure called CoVaR. The key contribution of that work is the realization that systemic risk measurement has to capture externalities across firms. In the work with Markus, we focused broadly on the financial sector, including banks and dealers. The working paper version was first made public in September 2008, just before the Lehman failure, and the published version is printed in the July 2016 edition of the American Economic Review.

Q: You also worked on the leverage cycle of financial institutions, how did that work come about?

A: When I was a junior economist, I spent lots of time talking to staff in the Markets and Supervision Groups of the New York Fed. I had studied financial markets and institutions in grad school, but it struck me that the academic literature did not capture the way markets really worked. One sector that was particularly understudied was the broker-dealer sector. Those are the classic investment banks, the heart of Wall Street. Yet they did not show up in any of the capital market or banking theories. Academics tended to assume that households set asset prices and that financial intermediaries don’t matter for pricing and capital allocation.

Another academic from Princeton University, Hyun Song Shin, who is now Economic Adviser and Head of Research at the Bank for International Settlements, shared my view that financial institutions had to play a key role in the pricing of assets, the allocation of capital, and ultimately, macroeconomic activity. This shared view led us to write a series of papers. In the first, “Liquidity and Leverage,” which we drafted prior to the financial crisis, we document that broker-dealers manage their balance sheet in a highly procyclical manner so that they tend to expand balance sheet size in asset price booms and contract balance sheet size in busts. In equilibrium, such behavior tends to amplify asset price volatility, with consequences for credit supply and macroeconomic activity. Hyun and I followed up that work with a series of papers on the implications for monetary policy, one of which was presented at the Jackson Hole Economic Symposium of 2008. That research documents that the leverage of banking organizations is highly procyclical: firms tend to increase leverage in booms, making the system vulnerable to adverse feedback loops when asset prices decline, so that deleveraging cycles interact in a self-reinforcing manner. Monetary policy should take these dynamics into account.

The mechanisms that Hyun and I described were powerfully at work during the 2008 financial crisis, when adverse shocks triggered a sharp deleveraging with consequences for the real economy. Our research fed into the April 2009 paper by the Committee on the Global Financial System on The Role of Valuation and Leverage in Procyclicality. In subsequent work with New York Fed economist Nina Boyarchenko, we built on the work with Hyun by considering a general equilibrium macro-financial model that features intermediary procyclicality and that can be used as a basis for macroprudential and monetary policy evaluation.

Q: How deeply were you involved in monetary policy issues?

A: Throughout my career, I’ve briefed policymakers on monetary policy, primarily related to macro-finance issues, and I’ve conducted research on the role of financial stability for monetary policy. My ongoing research is focused on quantitatively documenting the so-called risk-taking channel of monetary policy. Expansionary monetary policy not only acts on the risk-free term structure, but also on the price of risk as financial intermediaries’ funding constraints are loosened. Reaching for yield thus acts as a transmission mechanism via financial conditions, but also increases vulnerabilities. Policymakers thus face a tradeoff between current macroeconomic objectives and risks to those objectives due to an increase in risk taking. Macroprudential policy can mitigate such risks.

Q: What was your role during the 2008 financial crisis?

A: During the financial crisis, I worked intensely on issues relating to the distress of financial institutions, under the leadership of Bill Dudley. I contributed to the development of liquidity facilities (including the Primary Dealer Credit Facility and the Commercial Paper Funding Facility), the assessment of certain institutions, and the overall risk assessment of financial and economic conditions. One particular paper that came out of that work, with Adam Ashcraft, Hayley Boeskey, and Zoltan Pozsar, features a map of the shadow banking system that presents the system’s complexity in a concise manner and illustrates the role of the various liquidity facilities and U.S. public sector backstops.

Q: Were you also involved in the post-crisis reform efforts?

A: After the financial crisis, I spent time helping to develop the Federal Reserve’s financial stability framework. That was motivated by the Dodd-Frank Act’s mandate to have the Fed monitor and manage systemic risk broadly, for the whole financial sector. A paper with Nellie Liang and Daniel Covitz from the Federal Reserve Board explains our monitoring framework to promote financial stability. The framework identifies and tracks the sources of systemic risk over time and facilitates the development of preemptive policies to promote financial stability. The framework distinguishes between shocks, and vulnerabilities that amplify shocks. The monitoring program tracks financial vulnerabilities in the banking sector, shadow banking sector, asset markets, and the nonfinancial sector.

In 2013, during a secondment to the U.S. Treasury, I was lead author of the Financial Stability Oversight Council’s annual report to Congress. The report is signed by the U.S. regulatory agencies, identifies threats to financial stability, and provides recommendations for ways to address those threats. The 2013 report was focused on vulnerabilities due to valuation levels in fixed-income markets and pointed to the compression of term premia and credit spreads. The report’s publication was followed by the 2013 bond market selloff, in which valuation levels reversed. Subsequent work analyzed the role of regulations in the selloff.

Q: What are important areas of your recent academic research?

A: I have published extensive research on valuations in fixed-income markets, in equity markets, and across asset classes. Much of that research has been conducted with New York Fed economist Richard Crump and Bundesbank (former New York Fed) economist Emanuel Moench. My paper with Erkko Etula and Tyler Muir on intermediary asset pricing won the Amundi Smith Breeden best paper prize of the Journal of Finance and my asset valuation models are used as a basis for valuation assessments for financial stability monitoring purposes. Recently, I have also worked with colleagues on the estimation of nonlinearities in asset pricing.

Q: What are important areas of your recent policy research?

A: With colleagues Michael Fleming, Or Shachar, and Erik Vogt, I have done work on market liquidity to evaluate the impact of regulations and changes in technology and market structure. This work has been publicized in a series of Liberty Street Economics blog posts that are summarized in a recent paper.

Q: What will your role at the IMF entail?

A: In my new role as Financial Counselor and Head of the Monetary and Capital Markets Department (MCM) of the IMF, I will advise the IMF and its member countries on monetary, capital markets, and financial stability issues. The department is focused on financial stability topics including multilateral surveillance, financial sector assessments, technical assistance, crisis management, country support, regulation and supervision, and policy development. The MCM also publishes the Global Financial Stability Report twice a year. I am very excited by the opportunity to lead MCM and to contribute to the IMF as financial counselor.

Tobias, what a great body of work and contributions while here at FRBNY. Looking forward to seeing what you do at the IMF.

A great retrospective and collection of important research to reference while continuing to learn about financial stability and lessons from crises. Good luck to you, Tobias, in your next chapter.