Historical Echoes: The Bank That Never Existed, or You Say ‘Immigrant’ and I Say ‘Emigrant’ 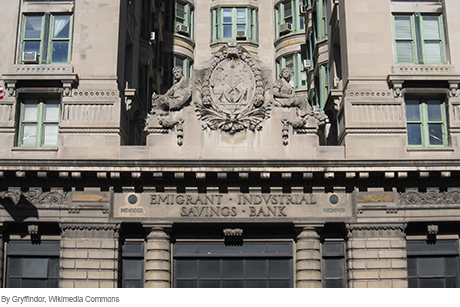 Just because an entity is referred to all over the place, does that mean it exists? We are not talking about heaven or hell. We are talking about the “Immigrant Savings Bank.”

Let’s backtrack for a second. Suppose you’re walking along the street in New York and you see a sign that says “Emigrant Savings Bank”—a name you may have come across before. Maybe you even have an account at that institution. But with immigration so prominently in the news of late, the bank’s name might suddenly strike you as puzzling: Shouldn’t it be “Immigrant Savings Bank”? Wouldn’t the bank’s services be for immigrants, among other customers, rather than emigrants?

We know the words “immigrate” and “emigrate” (and similarly “immigrant” and “emigrant”) mean slightly different things. Dailywritingtips.com provides an example to illustrate the difference:

When Charles Darnay fled France to escape the guillotine, he was an emigrant. When he settled in England, he was an immigrant.

Doesn’t it seem that the amount of time one is an emigrant is quite small in comparison to the time one spends as an immigrant (from the point of view of all but the folks left behind)? Also, according to Google’s Ngram viewer (which gets its data from the contents of Google Books), “immigration” and “immigrant” are used much more than “emigration” and “emigrant.”

Perhaps the previous lines of reasoning could account for a widespread error: it seems that a number of newspapers and pamphlets from the early 1900s contain references to “Immigrant Savings Bank” when “Emigrant Savings Bank” is intended (or “Immigrant Industrial Savings Bank” instead of “Emigrant Industrial Savings Bank,” the original name of the bank). One hilarious example (paywall, but you can see the evidence in the snippet) appears in a 1912 New York Times article, in which two different names are assigned to the same bank:

They Will Move Their Private Offices and Library into the Emigrant Savings Bank Building.

The Justices of the Supreme Court in this county decided yesterday afternoon to forsake their cramped quarters in the old Court House and, with the exception of two or three, to move their private offices to 43 Chambers Street, where the twelfth and thirteenth floors of the new Immigrant Savings Bank Building will be set aside for their use.

There are older examples: this page from the 1883 Real Estate Record and Builders’ Guide (Brooklyn) has two versions of the bank name in the same list (to keyword search the entries, click “view plain text”). Another list from an 1852 issue of The New York Herald has the “Immigrant Industrial Savings Bank” located at 51 Chambers Street—the original address of the Emigrant Savings Bank. Could the cause of some of these errors be that when in doubt, the brain will grab whatever seems to make the most sense?

In any case, why was the name “Emigrant Savings Bank” chosen? The bank’s name was derived from the name of the organizational body that founded it in 1850—the Irish Emigrant Society.

A 1934 treatise, Modern Story of Mutual Savings Banks, has this to say about the origins of the bank (page 352):

We must remember that in 1850 the Nation was still in the process of being made. Through the large accretions of population, owing to the extensive immigration from Europe, the United States was coming to the fore as a really populous country. It was then much of the foundation was laid for the nation of today.

Among these immigrants, many were from Ireland. They were arriving in a new country, fated—most of them—to grope and stumble until a foothold had been gained. To help them was, of course, an act of humanity. It is from this desire to help that the Emigrant Savings Bank derives its being.

And why did the Society use the word “emigrant”? Perhaps they still had one foot back in their beloved country of origin. Also, consider that in the second half of the nineteenth century it would not have been an odd choice to use “emigrant” instead of “immigrant.” As a point of interest, let’s look back at that Google Ngram Viewer graph of usage cited above. What’s super interesting is that “emigrant” and “emigration” were used more frequently than “immigrant” and “immigration” between 1800 and 1905. This pattern reversed itself somewhere between 1900 and 1905. What concepts these words actually denoted at different points in time is a question that goes well beyond the scope of this blog post.

The archives of the Emigrant Savings Bank provide a rich source of data about immigrants (mostly Irish ones) in New York City between 1841 and 1933. The New York Public Library, which hosts these archives, states that “many of the volumes in the collection are personal and family chronicles as well as records of banking transactions. Collectively these volumes rank with the richest sources to be found on either side of the Atlantic for the study of Irish emigration.”

You may be forgiven for your consternation with Emigrant and Immigrant, but your second paragraph clearly demonstrates how the authors create these dilemma, i.e. “Emigrant Savings Bank” The sign reads: EMIGRANT INDVSTRIAL SAVINGS BANK