« Just Released: The Regional Economy Is off to a Good Start in 2017 | Main | Historical Echoes: The Bank That Never Existed, or You Say ‘Immigrant’ and I Say ‘Emigrant’ » 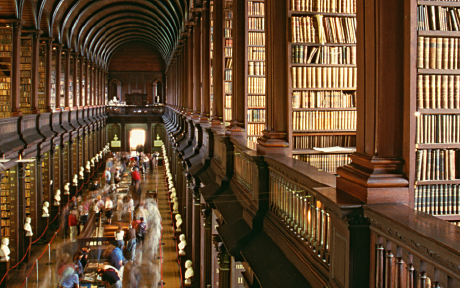 The “extremely overdue library book” has had a long run as a sitcom trope. As a source of humor, the ludicrously large library late fine pays off in at least two ways: first, there’s the enormity of the fine when compared with the insignificant monetary value of the book itself (paving the way for jokes about inflation and compound interest); and second, there’s the idea of the “criminality” of the offender, who is probably unlikely to commit any other kind of crime, with the concomitant image of “library police” (or actual police) coming after the negligent borrower . . . One day, that could be you, dear reader.

Although the concept makes for some funny story lines, this phenomenon is very real. Recently, the New York Times published an entertaining article about a library book that was finally returned to the Brooklyn Public Library—fifty-seven years past its due date. Recent stories about extremely overdue library books include cases where volumes were turned in 67, 75, 100, and 120 years late. Mentalfloss.com has a post listing “11 ridiculously overdue books (that were finally returned)”—apparently, chopping down cherry trees was not George Washington’s only social transgression.

The New York Fed has its own story to add to the annals of overdue-library-book justice. Here is an item called “Lost Book,” found in an internal Bank newsletter from 1952:

Looking back on 1951, the girls of the Reference Library may well think of it as “The year the book came back.” Establishing some kind of record for that sort of thing, a book borrowed in 1917 was returned to the Library as 1951 neared its end—34 years later.

As Library girls tell it, the story of the possible record is a simple one. In 1917, much before their time, when our quarters were lodged in the Equitable Building, 120 Broadway, a young man at work in the Bank borrowed a copy of Credit and Its Uses, published that year.

Later he reported it missing. Still later he left the Bank. Thirty-four years later, his sister came across the book in an old trunk at her home in California. She remembered a missing book and her brother’s embarrassment, and mailed the book to him back East. He recognized it at once as the long missing book, and he was quick to send it to the Bank with an appropriate note.

The historical record does not indicate whether the guilty party was slapped with a hefty fine. One assumes he was pardoned for his crime—and that a new generation of Fed researchers was overjoyed to finally crack open Credit and Its Uses after a three-decade wait.

William Ambrose Prendergast, the author of Credit and Its Uses, was the fellow Teddy Roosevelt asked to nominate him as a presidential candidate at the Republican Party’s 1912 convention in Chicago. Columbia University Archives holds his papers from 1904-09 and describes Prendergast as a “financial expert [and] holder of various political appointments in New York City.” New York State Court of Appeals associate judge William E. Werner stated in a 1914 paper that he was “very largely indebted to William A. Prendergast, whose able and exhaustive work entitled ‘Credit and Its Uses’ is a text-book that should be in the library of every credit man in the country.“