« How Do People Find Jobs? | Main | The End of China’s Export Juggernaut » 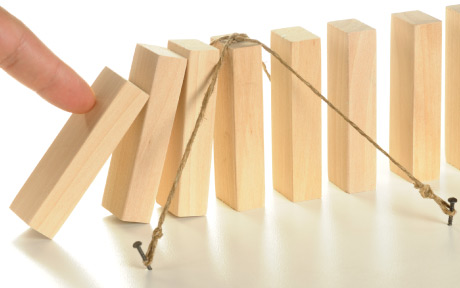 Stylized Facts on Financial Crises
A model to analyze macroprudential policy needs to adequately capture the nonlinear nature of a financial crisis. For example, an examination of credit spreads and output using data from several European countries and the United States shows that credit spreads—defined as average yields of corporate bonds relative to government bonds of similar maturity—tend to hover around 100 basis points a large fraction of the time. But during a crisis, credit spreads may take values as large as 700 basis points. (The period examined is 1999-2015 for the euro area countries, 1983-2015 for the United Kingdom, and 1973-2011 for the United States.)

As shown in the chart below, during crises, spreads rise sharply, peaking at about 450 basis points on average, and the value of banks’ equity declines dramatically, by roughly 70 percent on average relative to trend. These adverse developments on the financial side occur alongside sharp economic contractions, with GDP and investment spending falling about   4 and 7 percent below trend, respectively, in the quarter when the spread peaks. 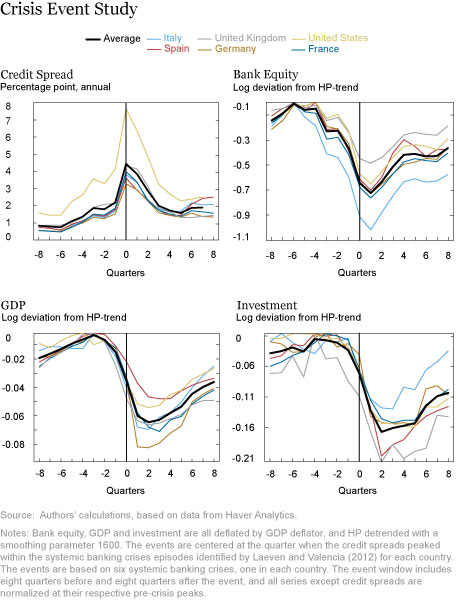 A Macroeconomic Framework
Our model incorporates a banking sector facing an occasionally binding leverage constraint (with leverage defined as the ratio of a bank’s total assets to its equity capital) into a standard small open-economy model of business cycles. The leverage constraint arises endogenously from an agency problem between banks and their respective creditors. We show that our model can account for the stylized facts of financial crises.

Banks’ main role in our model is to intermediate funds between savers (households and foreigners) and borrowers (domestic nonfinancial firms). Most of the time, banks perform this activity smoothly and face no limit on the amount of funds intermediated, resulting in low credit spreads. Occasionally, however, banks find themselves up against their leverage constraint, resulting in a shortage of intermediated funds that firms use in their investment spending and production activities.

Financial crises in the model are defined as severe cases of binding leverage constraints, which occur when banks’ equity capital is very low. Low capital then raises spreads sharply due to the banking sector’s inability to extend financing to firms, which in turn slows the economy, depressing asset prices and bank capital further. Our model also features working capital frictions that hinder banks' ability to lend to firms to pay for the wage bill. This type of friction gives rise to declines in hours and output in times of elevated credit spreads, helping the model account for the sharp output downturns observed in the data.

If banks chose to keep their equity capital high enough at all times, they would avoid the problem of hitting the constraint and having to restrict the amount of lending to firms. In other words, a better-capitalized bank balance sheet position would work to reduce the probability of a financial crisis. However, individual banks fail to internalize this systemic effect when they choose how much equity to issue. The existence of this type of externality creates a rationale for government intervention. We next study the effects of a policy that tilts the incentives of banks in favor of raising equity. This simple exercise is meant to capture the spirit of policies such as capital requirements.

Assessing the Desirability of Macroprudential Policy
We use the model to consider a subsidy on bank equity issuance. That is, for example, for every $1.00 in equity raised, the government would contribute an additional $0.10 in equity. The goal of this regulatory scheme is to induce banks to raise more equity, thereby contributing to strengthening their balance sheets.

The chart below shows the effects of policy on the probability of future financial crises in the left panel and the welfare gains in consumption equivalents in the right panel—for subsidies ranging from $0.00 to a $0.60 subsidy per $1.00 (listed on the horizontal scale). 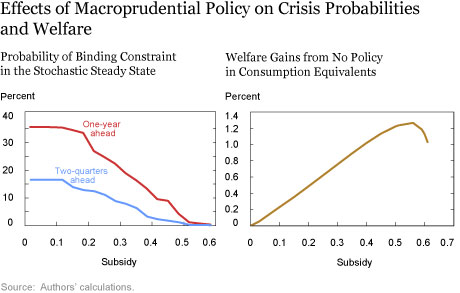 As the subsidy increases, the probabilities of future financial crises diminish monotonically. The reason is simple: the subsidy works to increase banks’ equity capital, thus making a financial crisis less likely to reach the point at which banks' leverage constraints start to bind. The policy raises welfare, which peaks when the subsidy is set to $0.56 per $1.00. The welfare gains are substantial: at the peak, they reach 1.27 percent of quarterly consumption, a value that is above the range typically found in the literature.


Albert Queralto is an economist at the Board of Governors of the Federal Reserve System.